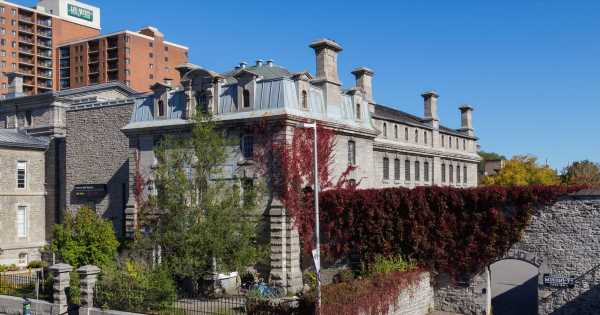 A prison which once housed some of the most violent criminals has been converted into a hotel.

Ottawa Jail Hostel, in Canada, is one of the world's only converted former prisons where you can stay in rooms which bear the names of many notorious former inmates who used to roam the halls.

The hotel's courtyard where inmates would be let out on exercise has been converted into an outdoor seating area for guests to share a drink in the summer, while rooms have been updated to feel less like cells.

Despite the comfortable surroundings, each room contains short snippets of grisly history about the former criminal guests.

The prison was constructed in 1862 to provide accommodation for inmates in closer proximity to Ottawa's courthouse.

Whelan was executed in front of 5,000 people right outside the jail.

Legend has it that his ghost still roams the halls of the building, with guests reporting that they have seen him standing at the end of their beds.

Other inmates of note included Eugene Larment, who murdered an Ottawa police detective.

The building was used as a working prison until 1972, when it was closed down.

Over the course of its use, hundreds of prisoners – men, women and children – were confined there, often in filthy conditions.

Excavations of the site turned up multiple unmarked graves thought to be the resting place of inmates who died while incarcerated.

Several ghosthunters and television teams have visited the building over the years in the hope of detecting supernatural activity.