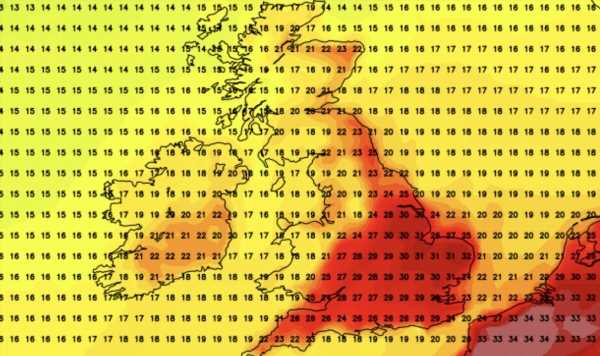 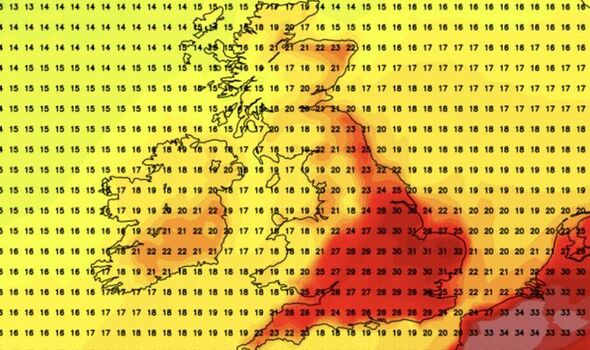 Britons are heaving a cool sigh of relief after baking in historic temperatures, although experts say the mercury is once again about to rocket through the roof. The mercury will rise into the 30Cs in parts this weekend before cooling down next week–but forecasters have their eyes on August.

James Madden, forecaster for Exacta Weather, said: “Confidence is starting to build for another blast of very hot weather during the start of next month.

“It remains to be seen from model runs nearer the time whether temperatures will edge towards the record heat we have seen this week.

“In the meantime, there are signs of another heat surge at the weekend with temperatures, particularly across the south, lifting back into the 30Cs.

“Temperatures in parts of the north will also rise into the 20Cs, but generally it will be cooler across the region.”

The Met Office said it is ‘keeping an eye’ on temperature charts with hints much hotter weather could return.

Although government forecasters expect nothing on the scale of the recent heatwave, the end of next week is once again firing up. 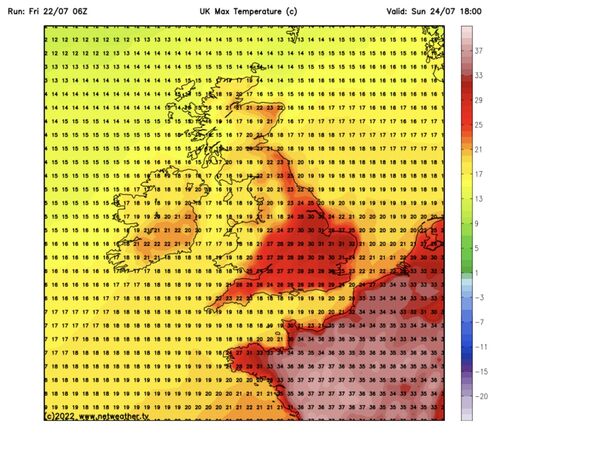 He said: “After some warmth at the weekend it is likely to turn cooler and fresher again next week, so something of a roller coaster ride.

“There are signs next week of temperatures starting to rise, but while we expect nothing like the temperatures we have just seen, there are suggestions temperatures could pick up to above average towards the back end of next week.”

Southern and eastern Britain will reach the high-20Cs today before hitting the 30Cs again tomorrow.

Scotland, Wales and the north will dodge the heat as the mercury hovers between the mid-teens and low-20Cs.

By Monday, maximum temperatures in the south and the east will be back into the mid-20Cs with the rest of the country between 15C and 20C.

Weather models show highs creeping towards 30C towards the end of the week and into the 30Cs next weekend.

Mr Deakin added: “Temperatures next week will be back close to average to start with, but we will need to keep an eye on those higher temperatures coming back across the south.”

Fresher weather will be driven by outbreaks of rain from Monday with a ‘brisk breeze’ bringing a chill to the north, he said.

A nationwide split will see low pressure to the northwest drive heavy downpours while drier conditions elsewhere will follow high pressure, he added.

Bookies are slashing the odds on next month going down as the hottest on record with Ladbrokes offering 10-11 from 2-1 on an August heatwave.

Spokesman Alex Apati said: “It looks like we’ll be seeing more of the same on the weather front with record-breaking temperatures set to come next month.”

Warmth will ‘resurge’ this weekend before another cold front sweeps the country at the start of next week, according to Weathertrending meteorologist John Hammond. 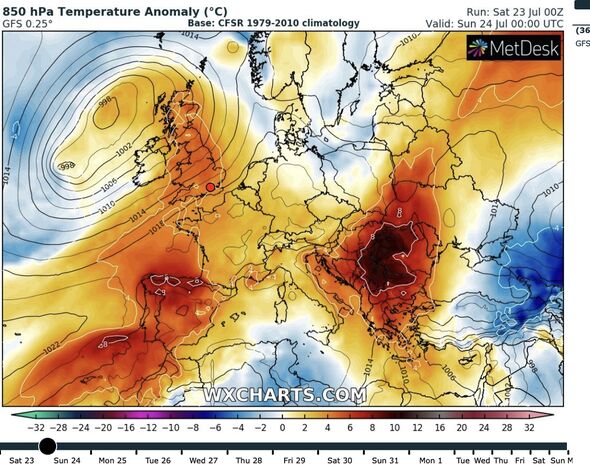 He said: “There is the ever-present chance the heat will bulge back in from southern Europe at the weekend.

“After this weekend, a cold front will bring both fresher air and showery rain down from the northwest as the new week begins.

“It will probably not be enough rain for those who need it because after all, some parts of the country have seen barely a drop so far in July.

“It has been a particularly dry month in what’s been a worryingly dry year so far.”