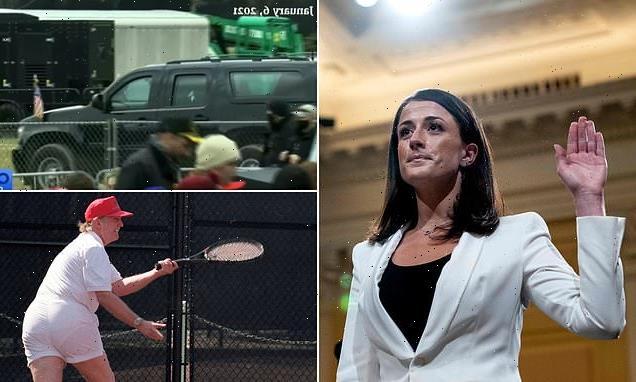 ‘Trump’s not a little guy, right?’ Former secret service agent says Trump is too big to have reached the steering wheel of his ‘Beast’ SUV – but says he doesn’t mean to ‘sound disparaging’ by talking about Donald’s ‘girth’

A Secret Service agent poured cold water on claims made by a former White House aide that on the day of the January 6 Capitol riot, former president Donald Trump reached into the front seat of his SUV and attempted to grab the wheel.

They suggested that Trump’s ‘girth’ and his 250lb, 6ft 3in frame would likely prevent him from making such an ‘agile’ maneuver in what is a specially adapted SUV that comes complete with a partition between the front and rear seats.

‘Trump’s not a little guy, right? And the space to actually be able to lunge towards the wheel is not that big,’ a former agent said to Insider.

‘I don’t mean to sound disparaging to the former president, but just his girth would prevent him from actually getting to the steering wheel. [He is] not the most agile human being.’

The fully armored SUV is not like a regular Suburban and instead comes complete with added security features.

The partition makes the space ‘extremely tight’ the agent explained.

On Tuesday, former White House aide Cassidy Hutchinson told the House Select Committee that Trump had lunged for the presidential limo’s steering wheel after Special Agent in Charge Robert ‘Bobby’ Engel refused to drive him to the Capitol to join rampaging supporters.

A Secret Service agent poured cold water on claims made by a former White House aide that on the day of the January 6 Capitol riot, former president Donald Trump reached into the front seat of his SUV and attempted to grab the wheel after agent Bobby Engel refused to drive him to the riot. Engel is pictured (left) ushering the president out of his car in June 2020 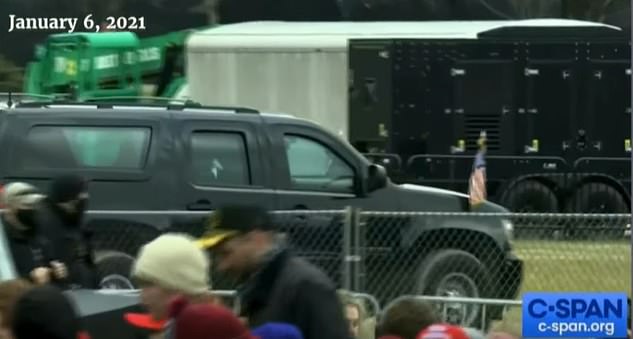 Her bombshell testimony set the scene for lawmakers to recall Engel to ask whether it was true that he was forced to restrain the president who allegedly responded by grabbing Engel around the neck.

‘We have and will continue to make any member of the Secret Service available to the committee,’ Anthony Guglielmi, a Secret Service spokesperson said to Insider.

Hutchinson claimed she was told about the incident by Tony Ornato, the White House deputy chief of staff for operations at the time, and that Engel was in the room at the time.

‘The president reached up towards the front of the vehicle to grab at the steering wheel. Mr. Engel grabbed his arm, said, “Sir, you need to take your hand off the steering wheel, we’re going back to the West Wing, we’re not going to the Capitol.” Mr. Trump then used his free hand to lunge towards Bobby Engel,’ Hutchinson said during testimony.

Speaking to Newsmax on Thursday, the former president disputed Hutchinson’s claim that he ‘lunged’ for the steering wheel of his limo.

Trump said he couldn’t have attacked an agent, stating bluntly, ‘these guys lift 350 pounds – I don’t.’

Trump undermined Hutchinson as a ‘climber’ who was rejected from a role in the Trump Organization and claimed without reasoning that the committee as a whole is ‘illegal.’

Agent Engel, meanwhile, had previously appeared before the committee explained how there had been a disagreement after Trump expressed a desire to head to the Capitol, but that they went back to the White House instead. 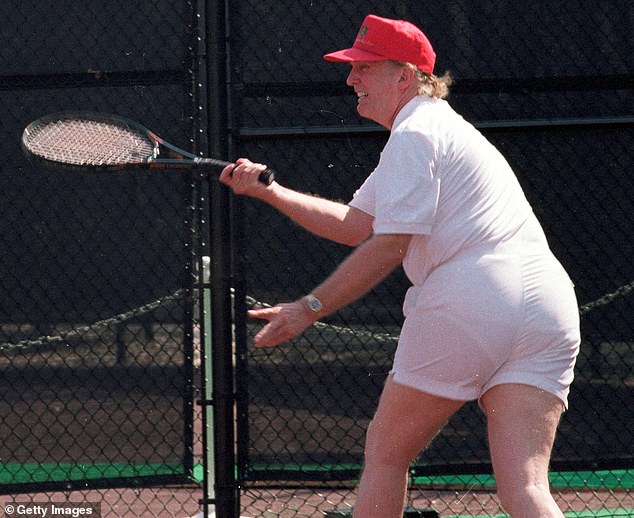 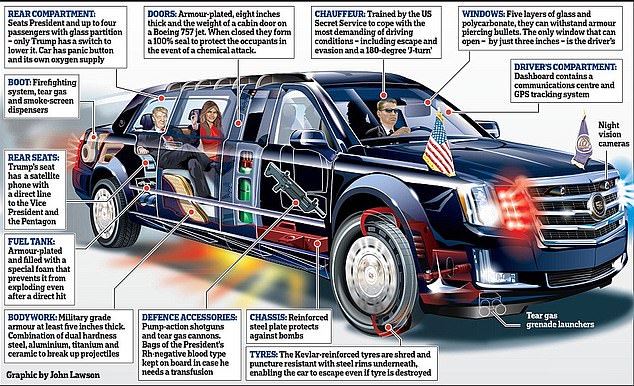 The president’s vehicle is a heavily-armored car known as ‘The Beast,’ driven by Secret Service agents. This graphic shows another similar model of The Beast to the SUV version Trump was in on January 6

‘There’s just too much gray area to bet the farm on it,’ Bill Pickle, a former deputy assistant director of the Secret Service, said. ‘Am I saying it didn’t happen? I’m not going to say that, because we all know this guy can be pretty emotional.

Agents are trained to do exactly that in the case of an emergency.

‘It’s ridiculous. I mean, it’s not a pretty sight. It’s not impossible, right? I just, I don’t see this president ever being able to do that. Ever.’

During her Tuesday testimony, Hutchinson claimed Trump knew his supporters were armed that day – and was ‘furious’ that they could not get into the official grounds for his Stop The Steal rally immediately before the riot.

‘Who cares if they have weapons, they’re not here to hurt me,’ she recalled hearing Trump say. He had been told that armed rally attendees were being kept out of the area because they could not get through the security checkpoint. She said Trump complained it made the crowd look smaller. 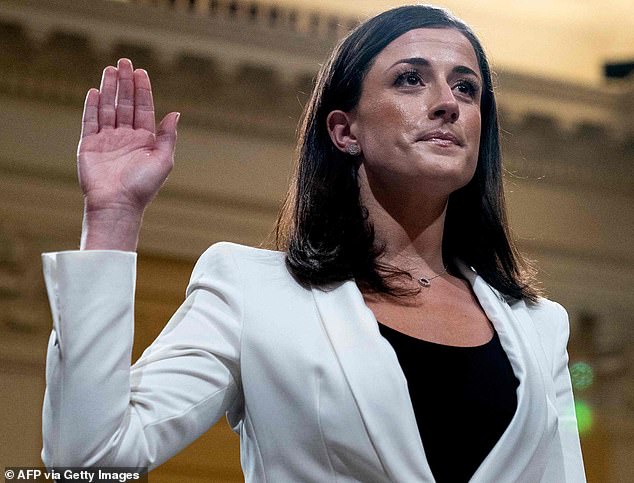 The 25-year-old was the January 6 committee’s star witness at an explosive hearing, Tuesday

The former president disputed her account on Thursday morning, insisting he ‘didn’t want other people to get hurt’ – and that the crowd was among the largest he’s ever spoken to.

He continued, ‘And that I wanted guns at my rally? I didn’t want guns. I have to speak too, and I don’t want guns for anybody.’

‘The woman is living in fantasy land. She’s a social climber – if you call that social. I think it’s just a shame that this is happening to our country,’ Trump said.

Trump pointed out that both Robert Engel, who was Trump’s head of security that he allegedly lunged at, and former deputy Chief of Staff Anthony Ornato, who Hutchinson said told her the limo story, are reportedly prepared to dispute some or all of her account.

He claimed they were ’embarrassed’ by Hutchinson’s testimony.

He added that it was ‘very nice that they came to my defense.’

The Secret Service has also told multiple outlets that it plans to respond to the allegations.

‘Because you know, some whackjob can just say this stuff and get away with it?’ Trump continued before returning to the allegation about firearms.

‘And other things – that I wanted guns at my rally. Okay, now, I’m speaking – why would I want guns? I don’t want people having – standing with guns in my rally.’

He said Hutchinson ‘wasn’t complaining’ at the time – despite her detailing her efforts before the committee to keep Trump from marching on the Capitol.

Trump said ‘numerous people’ told him Hutchinson was ‘not good’ but declined to elaborate further. 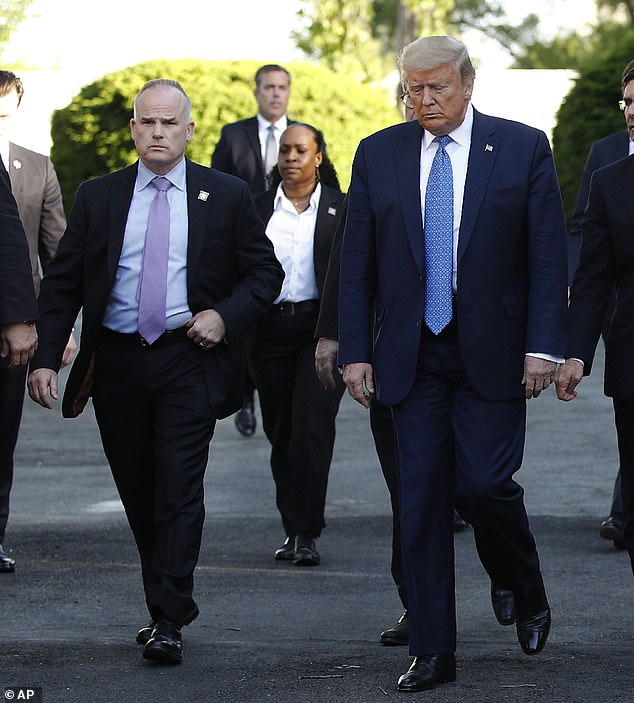 Bobby Engel walked side-by-side with Trump when the then-president infamously had crowds dispersed from Lafayette Park in Washington so he could hold a bible outside St. John’s Church in June 2020

‘I think the woman is – she’s got serious problems, let me put it that way. Mental problems.’

January 6 committee Vice Chair Rep. Liz Cheney said she was ‘absolutely confident’ in Hutchinson in a clip from an ABC News interview that aired on Thursday.

‘I think that what Cassidy Hutchinson did was an unbelievable example of bravery and of courage and patriotism in the face of real pressure,’ Cheney said.

Cheney suggested during Tuesday’s explosive hearing that the panel had evidence of Trump and his allies’ attempts to pressure witnesses in their investigation.

‘Our committee commonly asks witnesses connected to Mr. Trump’s administration or campaign whether they’ve been contacted by any of their former colleagues or anyone else who attempted to influence or impact their testimony,’ Cheney said.

She then displayed two messages. The first, from an unnamed witness, said they were told ‘as long as I continue to be a team player…I’ll continue to stay in good graces in Trump World.’

They also said they were asked to ‘keep in mind’ that Trump ‘does read transcripts’ as they ‘proceeded through my depositions and interviews with the committee.’

The second message, apparently sent to a witness the day before their deposition, states: ‘He wants me to let you know that he’s thinking about you. He knows you’re loyal, and you’re going to do the right thing…’