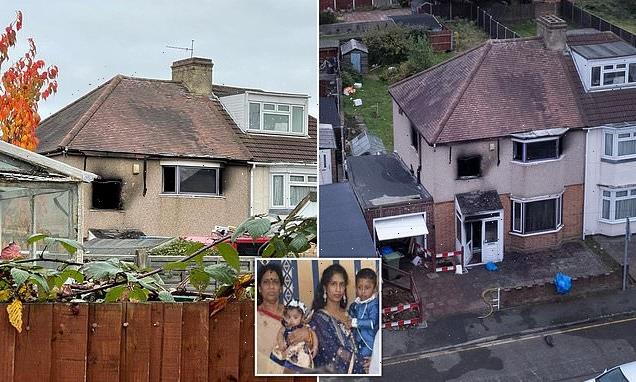 A father who lost his two kids, wife and mother in law in a house fire says he will ‘never recover’ from the tragedy.

The blaze that killed three generations of the Sri Lankan family began from an oil lamp lit during a Hindu festival, an inquest heard.

Niruba Yogan, 29, along with her mother Nagrasani Vasanthrajah, 60, and her two young children Tavishan, four, and Sasnaa, 23 months, all died in the blaze that ripped through their house in Bexleyheath, south east London last November.

The fire melted an electric cable in the cupboard under the stairs which in turn ignited the gas supply as the family prayed upstairs.

Once they realised the house was on fire they were trapped whilst a terrified Mrs Yogan rang her husband who was at work screaming ‘fire, fire’, it was reported at the time. 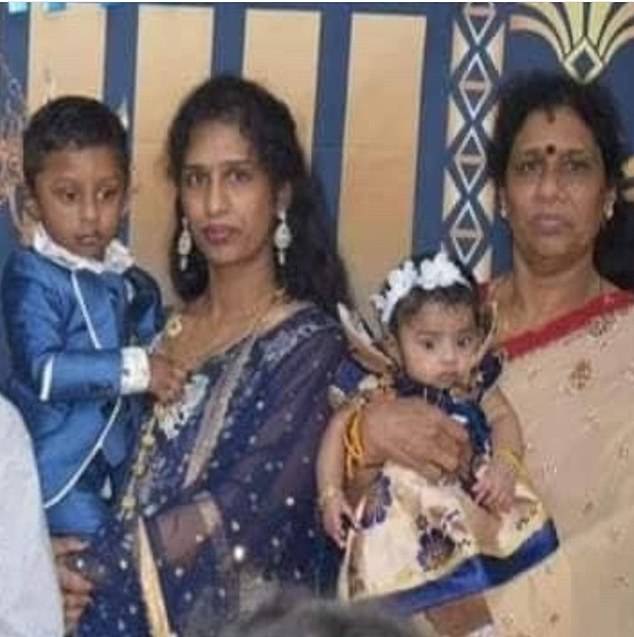 Yogan Thangavadivel was at work when a house fire started by an oil lamp during a Hindu festival ignited the gas supply and killed his wife, two children and mother-in-law. Pictured: Niruba Yogan, 29 and Nagrasani Vasanthrajah, 60, holding four-year-old Tavishan and 23-month-old Sasnaa 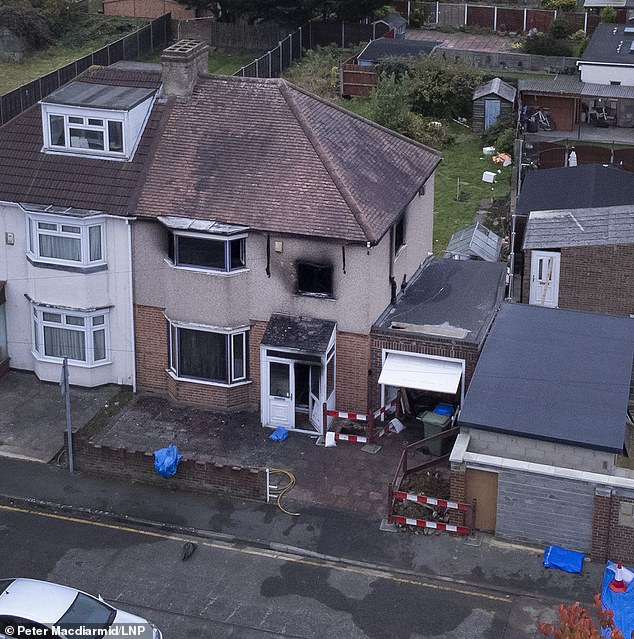 The fire melted an electric cable in the cupboard under the stairs of the house (pictured) in Bexleyheath, south east London, which in turn ignited the gas supply as the family prayed upstairs

Her husband, Yogan Thangavadivel, raced home on the night of November 18, 2021 but it was too late.

In a pre-written statement Mr Thangavadivel said: ‘I do not even know where to start, how do you explain such a loss in a few words?

‘I cannot believe they’re all gone and I do not know how I will ever recover from this. But they will continue to live in my memories and my heart.

‘Every day I wake up hoping this was all a horrible nightmare and my kids and my love are still alive in our dream house.

‘My dear wife, you gave me the whole world. All those years with our family were the best of my life and I will never get to relive it.

‘The pain and sorrow will always live with me as well as the happy memories.

‘Being with you, I saw the whole world in a different light. It was like I found everything I wanted in you. Please come back.

‘Tavishan, my son, always a happy and cheerful boy who does not sit for even a bit. His sly way of creeping up on you and laughing in your face is unforgettable.

‘Just before he passed away he got a certificate from school saying he was a wonderfully talented boy.’

Of his daughter Sasnaa he said: ‘She wore a big dress for her first birthday and it kept falling but that did not stop her from trying to play.

‘Sasnaa never cried, she loved playing with other people and would not just stick to her parents.

‘Both my babies were active and happy. They had so much to live for and I will forever wonder what what they would have grown up to become.

‘My mother-in-law took the place of my mother who I lost in 2012. London was very new to her so me and my wife did everything to make sure she was happy.

‘She always called me her son and made sure I was looked after.

‘I wish that no one experiences this pain in their life and that it ends with me.

‘Losing one family member is hard but four, I cannot even write this without breaking down.

‘Rest in peace, until we meet again.’

Croydon Coroners court heard how the family placed a number of lamps around their house following the tradition of the festival.

But they became trapped while praying in an upstairs bedroom as one of the lamps ignited the gas and electricity supplies in a cupboard under the stairs.

Only a male family member who injured his legs jumping from a window, survived.

The family had only moved into the property in Hamilton Road three months before the fire.

Coroner Edmund Gritt said: ‘His family were at home together with another family member who survived the fire.

‘They were celebrating an annual festival called Karthigai Deepavali and the custom is to light oil lamps known as Diyas to bring lights to dark corners.

‘They lit a number of Diyas and placed them around the home and went upstairs to pray.

‘While there the family noticed the smell of burning but thought it was due to the lamps they lit so they put some out.’

When the other family member looked downstairs he saw the fire spreading and realised it was impossible to leave that way.

He was able to escape through one of the upstairs windows, injuring his legs as he jumped onto the roof of the garage. 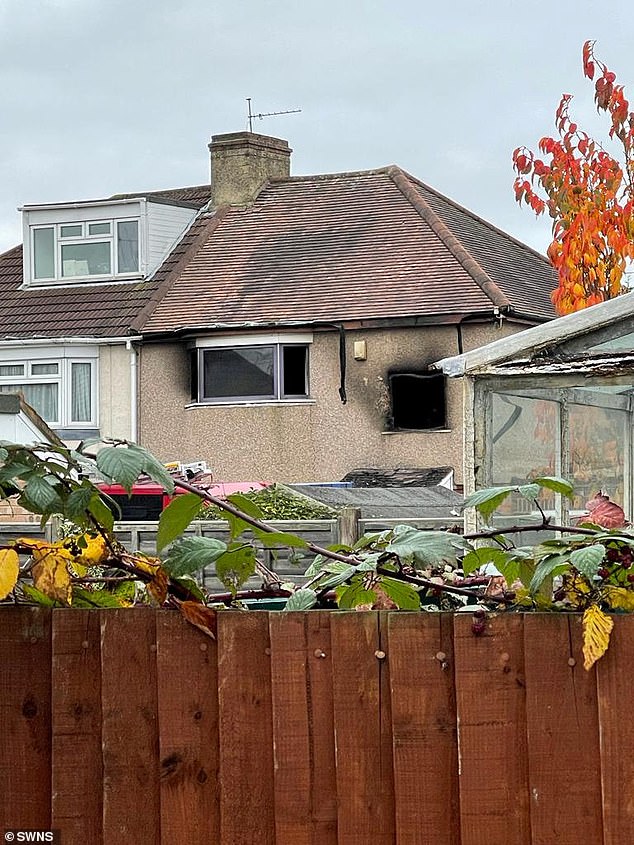 Firefighters pulled the family from the blaze, but paramedics were unable to resuscitate any of the four people, who were pronounced dead at the scene

‘The neighbour of the adjoining property tried to make entry through the front door. He broke the PVC door but the heat was too much.

‘He tried to go through to the rear of the property but the smoke was too much for him to enter.’

The family were left disorientated by the smoke and unable to find their way out.

Firefighters pulled them out of the house but paramedics were unable to resuscitate them and they were pronounced dead at the scene.

Coroner Gritt said the fire had started from an oil lamp placed by the family on the floor of the under stairs cupboard, which contained the gas and electric utilities as well as combustible material such as timber and textiles.

He added: ‘Unobserved, as the family prayed upstairs, the flame of the lamp ignited the combustible material in the cupboard.

‘That fire itself melted the electric cabling and an electric arc breached the gas supply. There was not a gas explosion but effectively a gas flame which was fuelled by the gas supply.’

From there ‘a slow stream of flame’ spread up the stairs and trapped the family in the rear bedroom of the house.

Sub Officer Guppey said it was difficult to know the speed of the fire’s spread but that the flocked wallpaper and paint helped it burn faster.

He added: ‘A small Diya was found close to the threshold of the cupboard door. It was found on the floor and fire debris covered the top of it, which implies it was on the floor at the outset.

‘A level of fire spread from around the Diya, progressing towards the cables of the electrical supply of the property.

‘The rubber coating of the cable, that would give off a lot of heat and smoke once it became involved with fire.

‘Also, there was a ready source of fuel in the area and plastics and other materials ignited and sustained flame.’

After reading post-mortem and toxicological reports Coroner Gritt concluded that the four family members had died from inhaling toxic fumes and smoke.