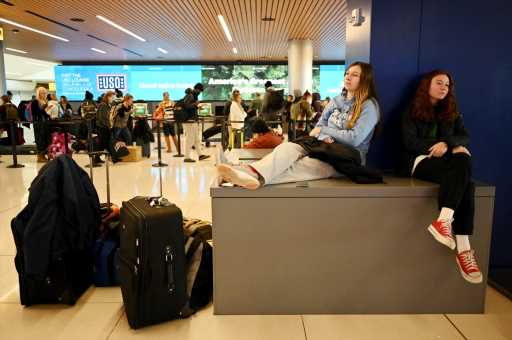 Temperatures at Denver International Airport dropped to minus 24 degrees Thursday morning, marking the coldest December day since 1990 and 1 degree away from setting a record low for the month, according to the National Weather Service in Boulder.

The 75-degree temperature drop from Wednesday’s high to Thursday’s low was the second-largest two-day swing on record in Denver, according to the weather service. And it came with about 4 inches of fresh snow.

Wind chills were reported Thursday to be as low as minus 54 degrees near the Nebraska state line and on Berthoud Pass, while temperatures felt minus 25 or lower throughout much of the metro area.

Officially, the mercury in Denver never climbed above zero.

The deep freeze sent travelers scrambling during one of the busiest weeks of the year, with many spending the night in Denver International Airport’s concourses. Nearly 600 flights were canceled in and out of Denver on Thursday, with more than 700 delayed. Southwest Airlines canceled 71% of its flights in and out of DIA.

Travel by land wasn’t much easier. RTD canceled several light-rail trains Thursday because of snow or missing operators. Various highways — including Interstate 70 in the high country — were shut down for long stretches because of crashes or adverse conditions.

As most of the metro area hunkered down inside, city officials scrambled to open shelters for those living on the streets. The city stood up a 24-hour warming shelter in the Denver Coliseum on Wednesday night that was planned to house 225 people. Instead, about 354 people spent the frigid night there.

Temperatures were expected to drop down to about minus 18 in the city Thursday night with wind chills as low as minus 36, according to the National Weather Service.

“We’re trying to spread folks around as best as we can,” said Jill Lis, a city spokesperson.

Those seeking refuge from the dangerous temperatures can visit Denver libraries and recreation centers during normal business hours Friday.

The city’s Department of Infrastructure and Transportation did not suspend any services Thursday, a department spokesperson said. Work such as street plowing, trash collection and checking on safety-related parking complaints continued as normal.

The infrastructure department also did not have any major emergencies — such as water main breaks — to report as of Thursday afternoon.

The National Weather Service put its wind chill warning in effect for much of northeast Colorado until 11 a.m. Friday, bracing for gusts up to 55 mph in some places.

“Exposed skin may become quickly frostbitten or frozen,” forecasters warned. “The dangerously cold wind chills could cause frostbite on exposed skin in as little as 5 minutes.”

The extreme weather — which climatologists say will only increase with climate change — made a strong push for several Denver records. The 61-degree temperature swing Wednesday marked the third-largest on record for a single day, while the 75-degree change from Wednesday to Thursday marked the second-largest in Denver’s history.

“When you dislodge that cold air, it has to go somewhere,” National Weather Service meteorologist Russell Danielson told The Denver Post this week.

Friday’s forecast calls for a high of 14 in Denver under sunny skies — but wind chills will be as low as minus 30, according to the weather service.