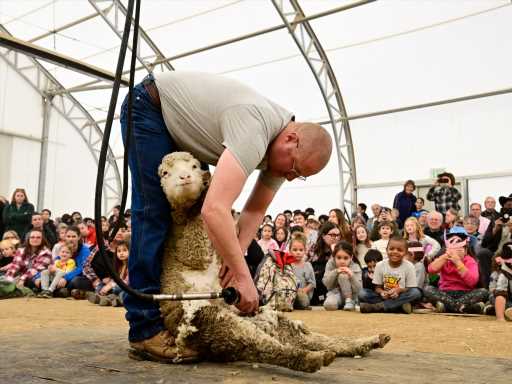 Rising cases of the COVID-19 omicron variant made for a bumpy ride at the 2022 National Western Stock Show, but this year the 117th edition of the annual event is square in the saddle and on pace to score record attendance numbers.

And a multiyear makeover for the home of the show and rodeo that first kicked off in 1906 is moving ahead, with the historic wood pens of the livestock yards modernized and construction soon to start on a livestock events center and stock show headquarters.

“We had the highest opening day of all time, almost 60,000 people,”  said Paul Andrews, stock show CEO and president.

Andrews isn’t predicting that the 2023 stock show will set a new attendance record, but he said, “We are on pace for that, which is tremendous.”

The situation is far different from 2021, when the stock show didn’t even make it out of the gate. It was canceled because of the pandemic. The first phase of expanding and redeveloping the 110-acre site tucked along the South Platte River in north Denver started in earnest then.

“Frankly, it could’ve been a lot worse. I think we felt really good that we were able to host that many people when omicron was running at that level,” Andrews said. “With the numbers being depressed now, people are feeling a little more confident being around each other.”

The crowds in the main building, Exposition Hall and Hall of Education, were big Wednesday. People were milling about the 900 booths at the trade show. In the barns on the ground level, cattle were lined up after getting washed, dried and gussied up for their appearance in the show ring.

About 3,000 exhibitors are signed up to show and sell their animals this year. Andrews said 12,000 to 13,000 animals are expected to be on the National Western grounds during the stock show’s 16-day run, which ends Jan. 22.

People from 48 states and more than 30 countries are expected to show their livestock, Andrews said. Mexico, Brazil, China, Australia, Uruguay and Canada are among the countries represented.

“We’re back to pretty normal numbers for livestock. We went from seven sales last year and will have almost 15 this year,” Andrews said.

Eight associations for specific breeds are holding their national shows at the Denver event, he added.

A first for the National Western rodeo is a bracket-style lineup for participants. Andrews said competitors will perform two days in a row. Event winners will go on to the final Saturday performance and, depending on their scores, on to the final Sunday rodeo.

“We’re doing what we would like to call, and hopefully this term will stick some day, January Madness, like March Madness for the NCAA (basketball) tournament,” Andrew said.

The outdoor livestock yards, where a lot of the serious business gets done, have been transformed. The historic wood pens have been replaced by new metal and wood structures that can be removed when the stock show is over. Each pen has six power outlets and access to hot and cold water.

In the past, livestock owners would haul around generators, and long power cords snaked all through the yards.

Eldon Krebs, a rancher from Gordon, Neb., said there had been conversations about people’s attachment to the old pens they had used for several years. His first trip to the stock show was in 1958.

“The ones that were sentimental about the historic value of it, because the stock show has done such a masterful job of redoing this, those people have seen the light,” Krebs said.

Krebs said new flooring helps prevent cattle from slipping on snowy or icy ground and is easier on people hauling in feed. Drainage ponds catch runoff water, which eventually will flow to a wastewater treatment plant.

Along with updated pens, a new stockyards event center was built. After the stock show is over, construction is expected to get going on a 350,000-square-foot livestock center and an adjacent building that will be the stock show’s headquarters.

The buildings are part of the work to expand the National Western grounds to 250 acres and make the site a year-round attraction. Last week, Colorado State University opened the third and final building of its Spur campus  to the south of stock yards. The buildings house researchers, interactive exhibits and provide spaces for classes and programs focused on agriculture, human and animal health and water.

In 2022 the National Western Center Authority, which manages the site and programs the events, oversaw concerts, farmers’ markets, symposiums, conferences, fundraisers and community events in and around the livestock center. About 800,000 people took part in the various events, according to the authority.

Brad Buchanan, CEO of the authority, expects the number of participants and events to increase significantly this year.

“We’re in very active conversations with event producers and promoters who are interested in having events,” Buchanan said.

The authority has set up a text platform to keep the public informed, he added. People can text NWCENTER to 21000 for English and NWCespanol to 21000 for Spanish.

The Mayor’s Office of the National Western Center is responsible for designing and overseeing the construction of many of the buildings. Work done by the office includes building utility infrastructure and new roads; relocating and consolidating railroad lines; and overhauling two major sewer lines that involved combining them into one line, placing it underground; and tapping the thermal energy to heat and cool buildings on the grounds.

Tykus Holloway, the agency’s executive, said the city, the stock show and other partners, such as CSU, have invested about $1 billion so far in the first two phases of the National Western’s redevelopment.

Now the city is exploring how to finance the next five phases of the site’s master plan, which includes a 10,000-seat arena and the renovation of a stock show building into a community market. Denver voters in 2021 defeated a proposed $190 million bond measure that would have helped pay for the rest of the work.

Holloway said some of the options involve private partners, working with coalitions and nonprofits and federal funds. He said his office is committed to carrying out the plans supported by the community.

“We do believe there’s going to be a solution,” Holloway said.