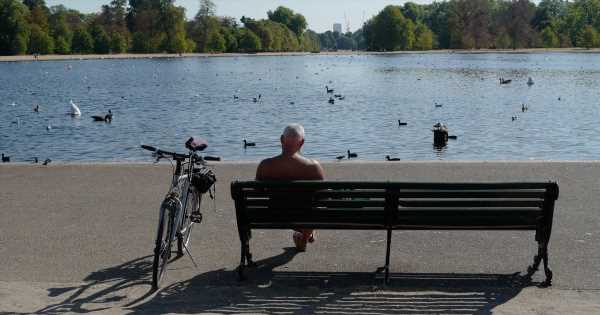 Temperatures are set to heat up following the weekend's polar plunge, with the mercury expected to rise to slightly above average at 24C.

According to the Met Office, the forecast for September 30 to October 14 suggests there will be high pressure, dry and above average temperatures.

It will be much milder for Brits, following the recent cold spell where temperatures sank to as low as 4C on an evening. Reports stated that the chilly polar winds made the air feel close to -6C.

Its current forecast for the start of next month says: "We are likely to continue seeing a northwest/southeast split through the end of September and into October.

"Temperatures generally above average for this period."

Over the next week, Met Office meteorologist Alex Deakin forecasted: “Beyond the weekend, high pressure will control things and as it builds, those easterly winds will ease off.

“It is going to turn chillier, but temperatures are likely to rise as we go through next week and there is a chance of seeing thicker fog patches in the morning."

An Indian Summer has been defined by the Met Office as a calm spell of weather occurring in autumn, and it often follows a period of frostiness.

However spokesman for the Met Office, Grahame Madge has said it is far too early at this stage to call whether an Indian Summer is in store for Brits yet.

He told The Sun: “At the moment we do have a northerly flow bringing cooler air.

"That could bring a few ground frosts in places overnight where we have got cooler skies.

“Next week it does look as though temperatures start to rise again to the low to mid 20s for a few places.

“There will be a lower pressure system bringing a little bit of wind and rain. But it will be reasonably good weather for most.”