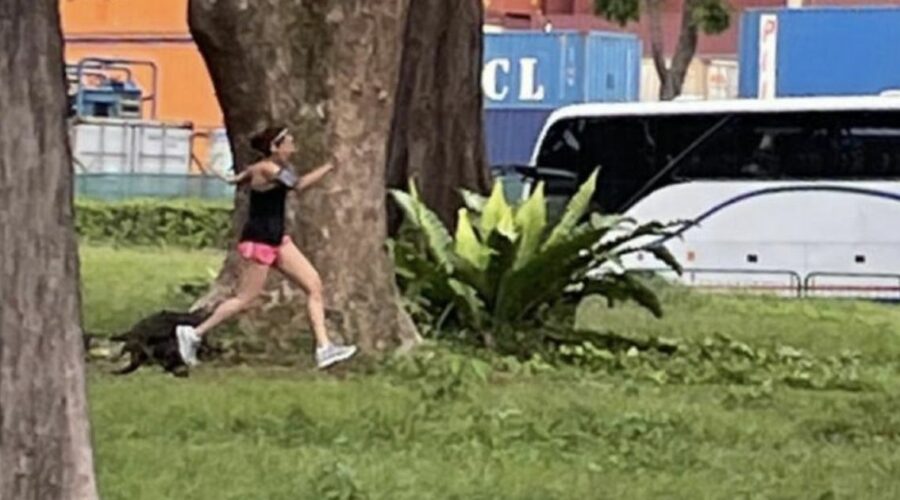 Onlookers were helpless to save a woman who was being chased by a pack of angry otters.

Locals were startled at the sight of the unnamed woman running at speed away from the furious animals, but were unable to help her as one latched onto her leg and sunk its teeth in deep.

READ MORE: Inside ‘horror’ festival where 'bloodied' revellers left on a bus ‘like a war hospital’

It has been alleged that the runner accidentally stood on an otter pup during her run.

Lu Xiu Feng – who managed to film the incident – told Shin Min Daily News: “I believe that the otters were aggravated after the woman accidentally stepped on one of their pups.

“People were too afraid to go near the otters.

“I did not see the otters biting the woman, but they started running towards us so we had to flee.

“We were not able to help the woman.

“The otter's teeth were very sharp, it's no joke.”

The woman was taken to a local hospital, but no medical update was given.

The incident saw the local National Parks Board issue a warning to locals, telling them not to touch, chase or corner the animals as these actions might frighten them, and to refrain from talking loudly and using flash photography as it might scare and provoke otters.

They also warned about having other animals near them.

A spokesman said: “Keep dogs on a tight leash to prevent them from chasing and frightening otters.”

According to Woo Chee Yoon, an expert from the Malaysian Nature Society said: ““These are wild animals, and wild animals always prefer the wild, but when such an option is no longer available, they have to settle within urban environments.

“Some species of animals adapt well, but many don’t, and thus perish under urbanisation pressure. They are likely displaced, and have found refuge in the lake. But their origin is hard to confirm.”