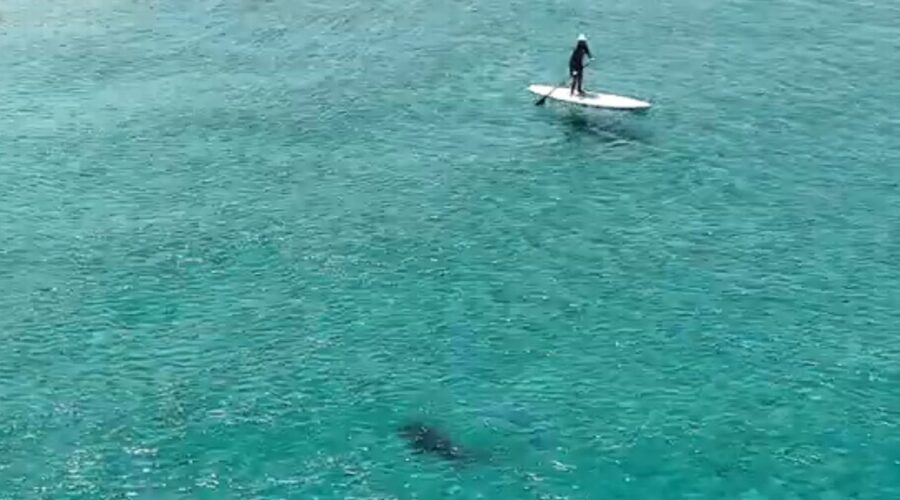 Paul Dabill, a drone photographer based in southeast Florida, US, filmed the sea beast coming within mere metres of a paddle boarder when he was controlling the automated device on the beach.

Bull sharks are territorial by nature and easily-provoked, they prefer shallow coastal water, which means they can often come into contact with humans.

But shark attacks are "extremely rare", according to the National Wildlife Federation.

In the video Paul filmed on Tuesday (June 14), the bull shark is seen approaching the shallow waters and swimming past a paddle boarder who has no clue of the animal's existence.

Due to the refraction of light on water, the paddle boarder couldn't spot the shark or see any shadows in the water.

At one point, the apex predator gets up close to the shore where a swimmer is just heading back to the beach.

Paul, who located the bull shark from the bird's eye angle, said: "Follow this bull shark on a journey to the beach as it passes a paddle boarder, swimmer and snorkelers at the Jupiter Inlet in Florida.

"They're common. During certain times I see them every time I fly my drone."

His video has reminded many viewers to be careful next time they go into the waters.

One wrote: "I think the next time I go to the beach I need someone on the shore with a drone to tell me when there is a shark nearby."

"Great video of a curious bull shark" a second commented and a third shared: "Appears the shark was trying to figure out where to go!

"Interesting video plus a potentially scary situation with the snorkelers!"