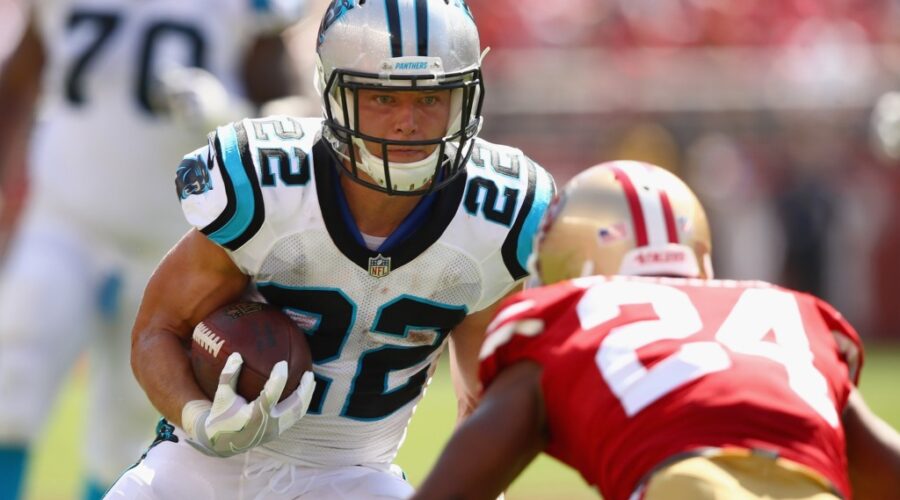 SANTA CLARA — If the 49ers wanted Christian McCaffrey, they could have taken him with the No. 3 draft pick in 2017. Instead, they took his Stanford classmate, Solomon Thomas.

Well, they 49ers got a mulligan.

McCaffrey is coming to the 49ers via a trade with the Carolina Panthers, ESPN’s Adam Schefter first reported Thursday night, well ahead of the NFL’s Nov. 1 trade deadline approaches. A league source confirmed the trade.

In return, the 49ers will give up four draft picks, none of which are of the first-round variety, in part because their 2023 first-round pick was included in last year’s package to Miami to move up for Trey Lance. Dealt to Carolina are three picks next year (second, third and fourth rounds) and a fifth-rounder in 2024, NFL Network reported.

At 9:22 p.m., the 49ers announced via Twitter that they’ve agreed to trade for McCaffrey, pending a physical, adding: “Welcome back to The Bay!”

This 49ers’ regime of coach Kyle Shanahan and general manager John Lynch has historically made trade-deadline deals, and now they’ve made one with someone they’ve known all 26 years of his life.

Before McCaffrey came to Levi’s Stadium as a 2017 rookie, he recalled how Shanahan may have been his babysitter in their Colorado days, when Ed McCaffrey (Christian’s dad) played for the Broncos from 1995-2003 under Mike Shanahan (Kyle’s dad).  Shanahan noted back in 2017 that McCaffrey’s dad, Ed, “was the man” and was why Shanahan used to wear No. 87 in college. Speaking of college, Lynch went to Stanford and played with Ed McCaffrey.

Asked earlier Thursday if the 49ers would enter the trade market, Lynch told KNBR 680-AM: “Because we had a very complete roster, the best trade we can make right now are with the inactive list or IR list, just to get our guys back.”

Lynch then mentioned the likely returns of defensive end Nick Bosa and left tackle Trent Williams, rather than single out Elijah Mitchell, their season-opening running back who’s been out since Week 1 with a sprained knee. Mitchell is expected to miss two more games then return after the bye.

Here are some pros and cons to consider of McCaffrey coming back to the Bay Area and joining the 49ers (3-3) ahead of Sunday’s game against the Kansas City Chiefs (4-2).

McCaffrey, 26, has seen his career derailed in recent seasons by injuries , not to mention the fact he is on one of the NFL’s worst franchises. He missed 23 of 33 games in the 2020-21 seasons because of shoulder, hamstring, thigh and ankle injuries.

The 49ers, with their run-oriented offense, annually have seen their running backs get hurt, to the point it’s become a disturbing routine they rely on five a season. So, adding an injury-plagued running back to the mix doesn’t sound like smart business.

But McCaffrey has been healthy this season. His team, however, has been so ill that it fired its coach after the 49ers beat the Panthers two Sundays ago.

The 49ers have been without Mitchell since his season-opening knee sprain. The 49ers are otherwise almost back up to full health in their running back corps. Fill-in starter Jeff Wilson Jr. is beloved — at least he was before last Sunday’s first-quarter fumble in Atlanta — and still awaiting their true NFL shot are rookies Ty Davis-Price and Jordan Mason. Tevin Coleman has responded with hot-then-cold appearances as Wilson’s backup.

While McCaffrey joins that mix, it will be fascinating to see if the 49ers also line him up in the backfield with “wide back” Deebo Samuel, whose dual-threat talents keyed the 49ers’ playoff push last season.

McCaffrey has almost as many career rushing yards (3,980) as receiving yards (3,292). The 49ers’ offense, which is averaging just 20.3 points per game, needs that extra output. Their rushing attack, the root of their offense, ranks just 12th at 124 yards per game.

Even this season, with Baker Mayfield struggling as the Panthers’ latest quarterback, McCaffrey has been the go-to guy. He has 393 rushing yards (85 carries, two touchdowns) and 277 receiving yards (33 catches, one touchdown).

In three seasons at Stanford (2014-16), he ran for 3,922 yards and 21 touchdowns, and he had 99 receptions for 1,206 yards and 10 touchdowns. He won the Associated Press’ Player of the Year honors and was the Heisman Trophy runner-up behind Derrick Henry in 2015, when “CMC” ran for 2,019 yards, had 645 receiving yards and accounted for 15 touchdowns, including two on his passes and two on returns.

Sparking their offense is a need, to complement Samuel, Kittle, Brandon Aiyuk, Kyle Juszczyk, and, yes, Garoppolo. That offensive not only is getting McCaffrey, but left tackle Trent Williams expects to return this Sunday from a high-ankle sprain that figured to keep him out another two games.

Among the first 49ers to chime in on Thursday’s trade: Kittle, who tweeted to McCaffrey: “Let’s goooooo”

The defense could use a boost, too, before the trade deadline. Bill Walsh’s notion of never having enough defensive linemen is proving valid, as the 49ers miss defensive tackles Arik Armstead and Javon Kinlaw. With Nick Bosa missing the past 1 1/2 games because of a groin issue, that isn’t reassuring, either.

The 49ers’ secondary lost cornerback Emmanuel Moseley to a season-ending knee injury, and while they may get Jason Verrett back or turn to younger options from recent drafts, that position also is never too deep. Safety is again a concern, what with Talanoa Hufanga in the concussion protocol and Jimmie Ward having to play with a cast on his left hand.

Financially, the 49ers have a bigger decision to make after this season in terms of McCaffrey. Sure, he could be a cheap rental at a prorated $990,000 base salary. Giving up four draft picks is a steep price for at least an 11-game tenure, however. McCaffrey’s contract then will have  three remaining years, at an annual salary of about $12 million. A restructured contract can solve future issues or current cap constraints, too.

The 49ers covet draft picks and have insisted for years on how they will build themselves into a perennial contender. After seeing the Rams bring in major players last season en route to the Lombardi Trophy, and considering the Rams could have used McCaffrey for this season’s title defense, the 49ers parted with four draft picks to bring McCaffrey to a regime that is certainly safe for another season, and now perhaps much longer.

McCaffrey is expected to arrive at 49ers headquarters on Friday, and although the 49ers waited a month before inserting Garoppolo to finish up the 2017 season, McCaffrey could have a much more sudden impact.

“It’s going to be interesting how Kyle Shanahan fudges the formations,” former 49ers and Stanford cornerback Richard Sherman said on Amazon Prime’s postgame show Thursday night. “Everybody’s like, ‘They’re just going to put (McCaffrey) at running back and let him go.’ No, they’re not. They’re going to keep Jeff Wilson Jr. on the field, put (McCaffrey) at receiver and create matchup problems. Theyr’e going to get the numbers they want in the box.

Michael Robinson, another former 49ers, said on the NFL Network: “If they can put the ball in Christian McCaffrey’s hands early in this game, often in this game and especially around the goal line and score touchdowns, that is how you steal a win from the Kansas City Chiefs.”

Former NFL running back Maurice Jones-Drew, also a Bay Area product, called McCaffrey a perfect fit for the outside zone-running style embedded in Shanahan’s system. “Christian McCaffrey puts his foot in the ground, he can get skinny, he has great vision,” Jones-Drew said on NFL Network. “He comes into a situation that is a great fit. Maybe he’s the missing piece to the puzzle.”