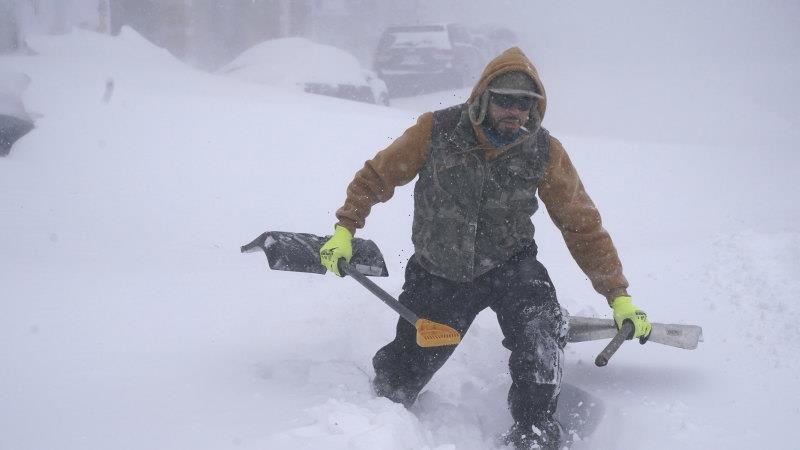 Washington: The death toll from a severe winter storm system that has chilled much of the United States for days has paralysed Buffalo, New York, on Christmas Day, trapping motorists in their cars, knocking out electricity to thousands of homes.

At least 30 people have died in US weather-related incidents, according to an NBC News tally, since a deep freeze gripped most of the nation, coupled with snow, ice and howling winds from a storm that roared out of the Great Lakes region late last week. 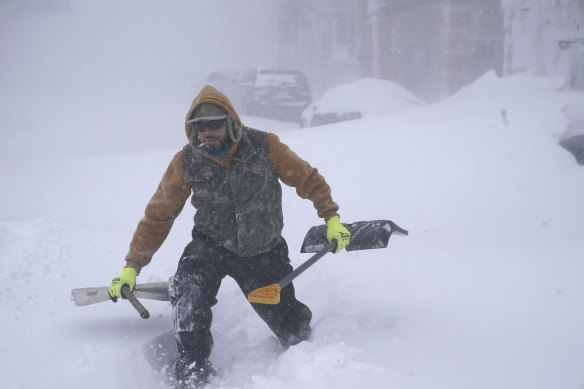 Travis Sanchez trudges over a snowdrift with a pair of shovels for a stranded motorist on Chenango Street in Buffalo, NY. Credit:AP

CNN has reported a total of 26 weather fatalities.

Much of the loss of life has centred in and around Buffalo at the edge of Lake Erie in western New York, as numbing cold and heavy “lake-effect” snow — the result of frigid air moving over warmer lake waters — persisted through the holiday weekend.

Erie County Executive Mark Poloncarz said the storm’s confirmed death toll climbed to 12 on Sunday, up from three reported overnight in the Buffalo region. The latest victims included some found in cars and some in snow banks, Poloncarz said, adding that the death tally might rise further. 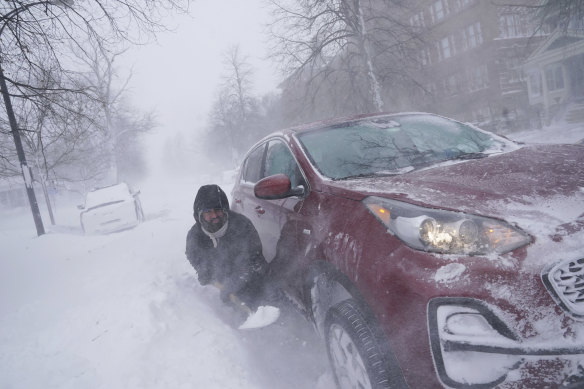 Gamaliel Vega tries to dig out his car in Buffalo, NY.Credit:AP

Despite a ban imposed on driving since Friday, hundreds of Erie County motorists were stranded in their vehicles over the weekend, with National Guard troops called in to help with rescues complicated by white-out conditions and drifting snow, Poloncarz said.

“This is not the Christmas any of us hoped for nor expected,” Poloncarz said on Twitter on Sunday. “My deepest condolences to the families who have lost loved ones.

The Buffalo police department posted an online plea for the public assistance in search-and-recovery efforts, asking those who “have a snow mobile and are willing to help” to call a special hotline for instructions.

The severity of the storm was notable even for a region well accustomed to harsh winter weather.

Christina Klaffka, a 39-year-old North Buffalo resident, watched the shingles blow off her neighbour’s home and listened to her windows rattle from “hurricane-like winds.” She lost power along with her whole neighbourhood on Saturday evening, and was still without electricity on Sunday morning.

“My TV kept flickering while I was trying to watch the Buffalo Bills and Chicago Bears game. I lost power shortly after the 3rd quarter,” she said.

John Burns, 58, a retiree in North Buffalo, said he and his family were trapped in their house for 36 hours by the storm and extreme cold that he called “mean and nasty”.

“Nobody was out. Nobody was even walking their dogs,” he said. “Nothing was going on for two days.”

Snowfall totals were hard to gauge, he added, because of fierce winds that reduced accumulation between houses, but piled up in an almost 2-metre drift “in front of my garage.”

New York Governor Kathy Hochul told reporters on Sunday that the Biden administration had agreed to support her request for a federal disaster declaration.

The storm was moving east on Sunday, after knocking out power to as many as 1.5 million customers at the height of outages late last week and forcing thousands of commercial flight cancellations during the busy holiday travel period.

More than 150,000 US homes and businesses were without power on Sunday, down sharply from the 1.8 million without power as of early Saturday, according to PowerOutage.us. In Buffalo, 16 per cent of residents had no electricity on Sunday, officials said.

In Canada, electricity was also out to at least 140,000 utility customers, mostly in the provinces of Ontario and Quebec, hard hit by the same weather system that buried western New York in snow.

More than 1700 flights in the United States were cancelled as of midday Sunday, according to flight tracker FlightAware.

Christmas Day temperatures, while beginning to rebound from near-zero (Farenheit) readings that were widespread on Saturday, remained well below average across the central and eastern United States, and below freezing even as far south as the Gulf Coast, National Weather Service (NWS) meteorologist Rich Otto said.

The Buffalo airport had recorded nearly 1.3 metres of snow by Sunday, the Weather Service said. White-out conditions persisted south of Buffalo on Sunday afternoon, with snow falling at the rate of 2-3 inches (5-7 cm) an hour.

In Kentucky, officials confirmed three storm-related deaths since Friday, while at least four people were dead and several injured in auto-related accidents in Ohio, where a 50-vehicle pileup shut down the Ohio Turnpike in both directions during a blizzard on Friday.

Other deaths related to the extreme cold or weather-induced vehicle accidents were reported in Missouri, Tennessee, Kansas and Colorado, according to news reports.