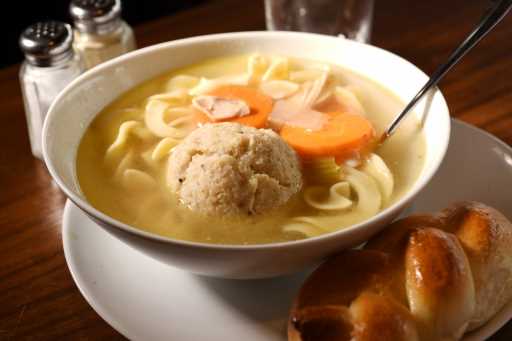 With Denver temperatures set to plummet into subzero territory Wednesday night, those who haven’t fled the state for the holidays will be looking for a warm reprieve.

To avoid hypothermia, here’s a list of 9 soup and soup-like dishes in Denver to warm up with when a fire just isn’t good enough:

Adelitas’ molcajete, named after the footed bowl the dish is served in, comes steaming to your table like fajitas. The stew comes in three varieties: meat, seafood and vegan. If you want more, try Adelitas’ new sister restaurant Ni Tuyo, at 730 S. University Blvd., where you can get molcajetes with braised pork ribs and another with chicken, chorizo and ribeye steak.

Homemade French onion soup just hits differently on a freezing winter night, especially when it comes with a perfectly broiled cheese top like Chez Maggy’s. The classic French restaurant, which celebrity Chef Ludo Lefebvre opened this year, has perfected the French onion soup cheese pull, and once you peel back that first layer, the soothing broth with soaked croutons will warm you from the inside out.

Traditional Sichuan hot pot is a crowd favorite at Bronze Empire. On a chilly week like this one, gather around one of the Chinese eatery’s 11 hot pot broths boiling over a camp stove to dip in thinly sliced meats, fresh vegetables, tofu, fistfuls of noodles, or seafood.

What better way to warm up during the eight days of Hanukkah than with a bowl of classic matzo ball soup from Zaidy’s? Previous owner Jason Rudofsky once called it the perfect cure for a cold, and even though new owner Beth Ginsberg took over the Jewish deli last year, the old-school matzo ball soup recipe that everyone knows and loves has stayed the same.

Uncle’s ramen is not your average Cup O’ Noodles. The rich, eggy noodle broth has become a go-to for many people on dark, frigid nights. It’s even better paired with a softshell crab bao bun. Uncle has six varieties of ramen, and the most popular is the spicy chicken, which is sure to leave even your nose sweating.

The Flu Shot Soup at Taste of Thailand

This is one flu shot that you don’t have to wait two hours for in a Walgreens line. Taste of Thailand’s flu shot soup, known for its magical healing powers, is one of the restaurant’s most popular dishes with a rich broth, chicken dumplings and freshly picked vegetables.

There are plenty of Vietnamese gems along the stretch of South Federal Boulevard, but the steaming bowls of pho from Pho 79 are a sure cure for the shivers. The flavorful broth, which is always the telltale sign of a good pho restaurant, is drink-worthy, and the thinly sliced beef melts in your mouth as you crunch on the fresh accompaniment of bean sprouts, jalapenos and basil.

When Trader Joe’s frozen soup dumplings just aren’t doing it for you anymore, get the real deal at ChoLon. The upscale Southeast Asian restaurant is known for its French onion soup dumplings, which burst in your mouth, leaving a warm trail of broth from your throat to your stomach.