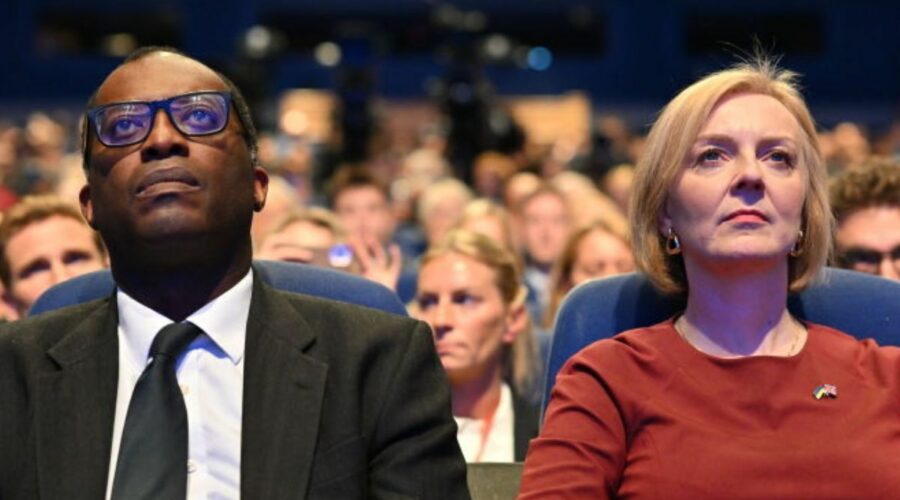 Liz Truss shuts down calls for a general election

Liz Truss and Kwasi Kwarteng have been urged “not to waste everything because of a couple of weeks’ worth of confected hysteria” as they come under huge pressure to reverse highly criticised tax cuts. The Prime Minister has only been in the 10 Downing Street hotseat for less than six weeks, but already finds herself fighting to hold onto the top job amid fury from her own Conservative Party MPs over the UK’s economic position.

Financial markets have been plunged into chaos since the Chancellor’s mini-budget on September 23, where he announced tens of billions of pounds worth of tax cuts in a desperate move to re-inject life into the economy.

But the move spectacularly backfired, with the pound plunging to a record-low against the US dollar and the Bank of England forced to make a rare emergency intervention to help calm panicking markets.

The Prime Minister is now under massive pressure to reverse many of those tax cuts, with some Tories reportedly already reportedly losing patience with her.

But the Bruges Group, whose honorary president was former Prime Minister Margaret Thatcher, has urged Ms Truss and Mr Kwarteng to stand firm amid increasing pressure.

The think tank tweeted: “The PM and Chancellor must stick to their guns. They have a large working majority in the Commons and two years until the next General Election.

“To throw everything away because of a couple of weeks’ worth of confected hysteria would be madness. The rot of short-termism must be excised.”

On Wednesday evening, the Prime Minister’s leadership was in renewed peril after she was accused of “trashing the last 10 years” of the Tories’ record at a bruising meeting with the influential Tory backbench 1922 Committee.

Ms Truss desperately tried to win over the group and said small businesses would have faced “devastation” if the Government had not acted to cap energy prices, according to aides.

But she was quickly met by furious Tory MPs reportedly raising concerns about soaring mortgage rates and the Tories’ rapid slump in the polls.

Mel Stride, the Tory chairman of the Commons Treasury Committee, said given the commitments from Ms Truss to protect public spending, they doubt whether any plan that did not include “at least some element of further row back” on the £43 billion tax-slashing package can reassure markets.

He said: “Credibility might now be swinging towards evidence of a clear change in tack rather than just coming up with other measures that try to square the fiscal circle.”

David Davis branded the Chancellor’s mini-budget a “maxi-shambles” and suggested a U-turn on some of the tax cuts would enable the Prime Minister and Chancellor to avoid a leadership challenge – at least for the time being.

He told ITV’s Peston: “If they do that I think people like Mel Stride and others will come in behind them and they buy some time.”

Mr Green told Radio 4’s PM programme: “It is indeed a topic of conversation around the tea rooms of the House of Commons as well, because we can all do the rough maths and see that it’s very difficult.

“One of the obvious ways would be possibly to defer some of the tax cuts or the failure to put taxes up.”

But Foreign Secretary James Cleverly has rallied behind Ms Truss, warning a change of leadership would be a disastrously bad idea.

He told BBC Radio 4’s Today programme: “We have got to recognise that we do need to bring certainty to the markets.

“I think changing the leadership would be a disastrously bad idea politically and also economically. We are absolutely going to stay focused on growing the economy.”