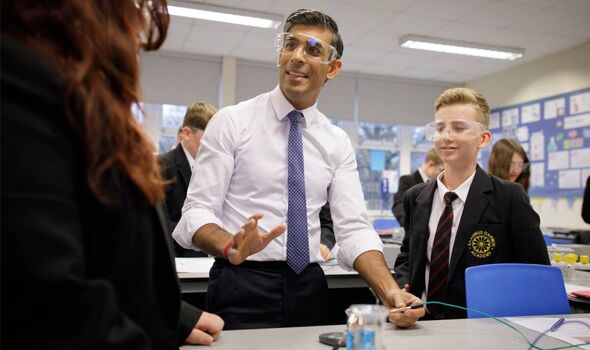 The Prime Minister will pledge to fulfil a personal ambition of ensuring the UK rivals the “best education ­systems in the world” and boost skills. Maths to 18 will be delivered through different routes, rather than just A-Levels to combat high rates of innumeracy, he will say.

Mr Sunak will also use his first major policy speech since entering ­ No 10 to promise to get a grip on the NHS crisis and tackle the issue of migrants crossing the Channel in small boats.

In a broad-ranging speech – which will set out priorities for the year – the PM will also turn his sights on tackling inflation and the cost-of-­living ­crisis as the UK battles recession and a wave of damaging strikes.

But his main focus will be on major education and skills reforms to help build a “better future for Britain”.

Mr Sunak will commit to taking action to deliver for the long term on issues such as low numeracy rates.

“This is personal for me. Every opportunity I’ve had in life began with the education I was so fortunate to receive,” he is expected to say.

“And it’s the single most important reason why I came into politics: to give every child the highest possible standard of education.

“With the right plan I see no reason why we cannot rival the best education systems in the world.”

The PM will commit to starting the work of introducing maths to 18 in this Parliament and finishing it in ­the next.

Around eight million adults in England have the numeracy skills of primary school children. Only around half of 16-19-year-olds study any maths at all and the problem is particularly acute for disadvantaged pupils, 60 percent of whom do not have basic maths skills at 16.

Despite these poor standards, the UK remains one of the only countries in the world to not require children to study some form of maths up to 18.

This includes countries such as France, Germany, Finland, Japan, Norway, and the US. He will say: “One of the biggest changes in mindset we need in education is to reimagine our approach to numeracy.

“Right now, just half of all 16-19-year-olds study any maths. Yet in a world where data is everywhere and statistics underpin every job, our ­children’s jobs will require more analytical skills than ever before.

Maths to 18 will equip young people with the quantitative and statistical skills they will need for the jobs of today and the future, he will say.

This includes having the right skills to feel confident with finances in later life, including finding the best mortgage deal or savings rate.

The government’s focus on literacy since 2010, including phonics, has led to significant improvements in standards. In 2012, only 58 percent of six-year-olds were able to read fluently.

By 2019, the figure had risen to 82 percent. The government hopes its renewed focus on numeracy will match this achievement.

Under the plans maths A-Level will not be compulsory for all 16-year-olds. The government is exploring existing routes, such as the Core Maths qualifications and T-Levels, as well as more innovative options.

The ambition is the PM’s first major intervention on education and reflects his mission to ensure more children leave school with the right skills.