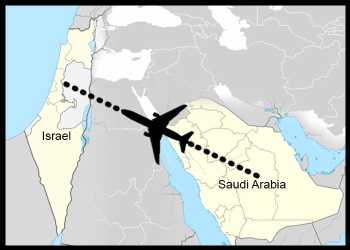 Saudi Arabia has announced that it will open its airspace to all air carriers, paving the way for flights between the Arab country and Israel.

Lifting the longstanding ban on Israeli planes flying over Saudi aerial territory is seen as improvement in relations between the two countries, which still do not have diplomatic ties.

The drastic change in the Kingdom’s aviation policy was announced Friday by Saudi Arabia’s General Authority of Civil Aviation.

“Within the framework of the Kingdom of Saudi Arabia’s keenness to fulfill its obligations under the Chicago Convention of 1944, which stipulates non-discrimination between civil aircrafts used in international air navigation, and to complement the efforts aimed at consolidating the Kingdom’s position as a global hub connecting three continents and to enhance international air connectivity, the General Authority of Civil Aviation (GACA) announces the decision to open the Kingdom’s airspace for all air carriers that meet the requirements of the Authority for overflying,” it said in a statement, without mentioning Israel.

The development is a foreign policy gain for US president Joe Biden, who is set to visit Saudi Arabia later in the day.

After holding talks with Palestinian President Mahmoud Abbas in West Bank, Biden is scheduled to board Air Force One at Ben Gurion Airport, Tel Aviv, at 8:25 AM ET, to become the first U.S. President to fly from Israel to Saudi Arabia.

In the last leg of his crucial Middle East Tour, Biden will meet with Saudi King Salman bin Abdulaziz al Saud at Alsalam Royal Palace, Jeddah. It will be followed by the President and his team participating in a working session with Crown Prince Mohammed bin Salman and Saudi Ministers.

Biden hailed the Saudi announcement as a “historic decision” which he described as the result of “months of steady diplomacy” between his Administration and Saudi Arabia.

“As we mark this important moment, Saudi Arabia’s decision can help build momentum toward Israel’s further integration into the region, including with Saudi Arabia,” he said in a statement. He promised to do all that he can, “through direct diplomacy and leader-to-leader engagement, to keep advancing this groundbreaking process”.

A separate statement by National Security Advisor Jake Sullivan on the opening of Saudi airspace said, “The President will have more to say on this breakthrough later today, as we embark on his historic flight directly from Israel to Jeddah, Saudi Arabia”.