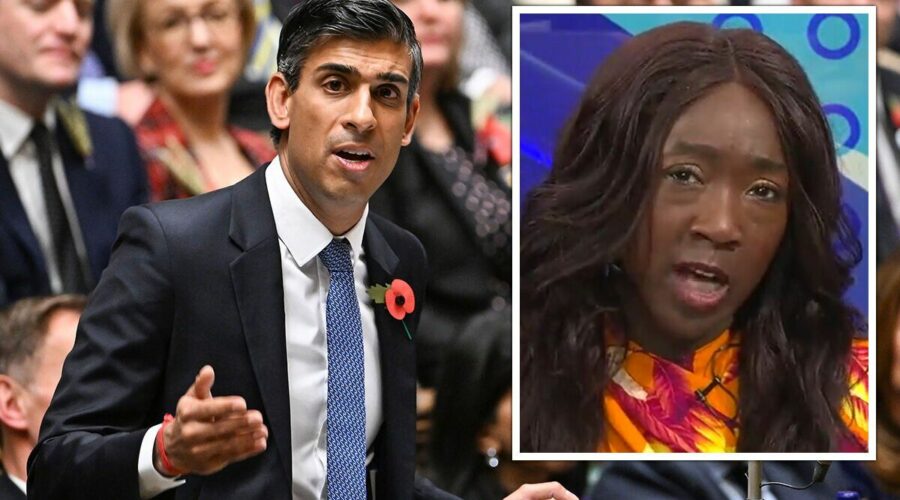 Prime Minister Rishi Sunak has been warned to “stop wasting our money” instead of “raiding the pensions of hard-working folk”. GB News’ Nana Akua delivered a blistering rebuke to reports that Chancellor Jeremy Hunt is looking to raid pensions to plug the £50 billion blackhole in public finances. Mr Hunt is reportedly looking at ditching the pensions triple lock, as well as halving pension reliefs for millions.

Downing Street are scrambling for ways to fill a blackhole in the public finances ahead of the autumn statement on November 17.

Ms Akua said: “There is a raid happening and it’s potentially on our pensions!

“Rishi and his Chancellor, Mr Hunt, had said they would ensure those with the broadest shoulders would carry the heaviest burden.

“This begs the question, why do they believe that is the squeezed middle class?

“Basically there is no money left and they can’t print anymore. They didn’t spend our money wisely.”

The GB News host continued: “Remember the pandemic? When they shelled out almost £30bn for Track and Trace? And it didn’t even work properly!

“What about the PPE? When the global supply chains dried up, we had to pay extortionate amounts for it.”

“It would be funny if people weren’t losing their lives.

“The latest plan to make up for this financial mismanagement is to make a pension grab of £10bn.

“Before you dare to raid the pensions of hard-working folk, stop wasting our money!

“Windfall the companies that benefitted from the pandemic, like Amazon and all those.

“Reduce the civil service and scrap HS2. That would help plug the gap!

“Why should we pay for the Government’s financial mismanagement?”

‘Message is clear, triple lock is not up for debate’ [REACTION]
Harry’s memoir could be ‘score-settling’ as Royal Family nerves grow [INTERVIEW]
Russian troops slam top general and beg for Kremlin help [VIDEO]

This comes as a Daily Express petition urging the Government to stick to the Conservatives’ 2019 manifesto pledge of protecting the pensions triple lock neared 300,000 signatures.

Lord Cruddas of Shoreditch has warned breaking the triple lock will signal the end of the Conservative Party as an election-winning force.

The Boris Johnson-backing Tory peer said the party is finished if the pensions triple lock is axed.

CMC Markets founder, Lord Cruddas, tweeted today: “If Rishi breaks the triple lock it will confirm that the Conservative Party has been taken over by Centre left, remain-backing politicians.

“It will be the end of the Conservative Party as a winning election force. I hope I am wrong.”