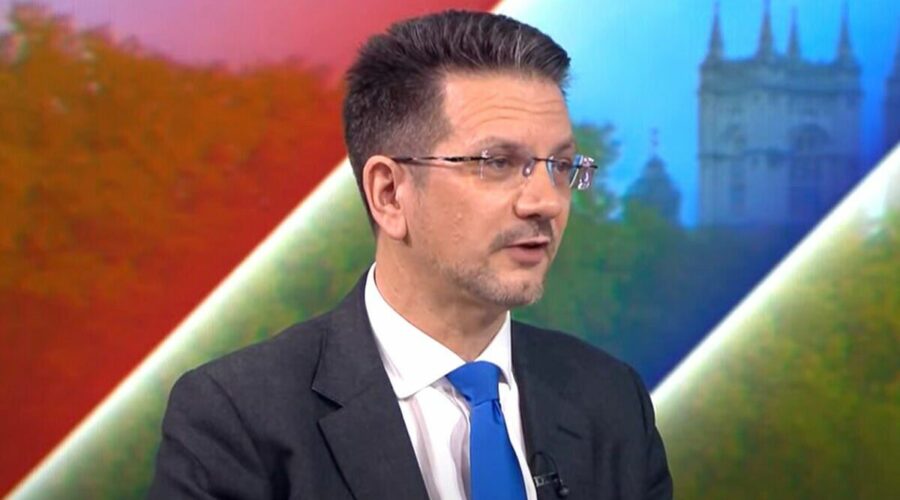 Steve Baker quizzed over his choice of leadership candidate

Former chairman of the pro-Brexit European Research Group Steve Baker has defended his choice of candidate for the upcoming Tory leadership contest despite appearing to “want anyone but Rishi” in the previous two campaigns. The Northern Ireland minister was pressed by Sky News’ Sophy Ridge to answer the question of “what has changed” given Mr Baker backed Suella Braverman, and then Liz Truss, in the contest over the summer, and campaigned for Boris Johnson in 2019. Despite the former prime minister standing again, this time as the de facto rightwing candidate, Mr Baker described Rishi Sunak as a “fantastic” candidate and stressed that he was the necessary role to bring stability to the party, while he suggested it would be a “guarenteed disaster” if Mr Johnson were to win the contest.

“I mean, it felt a little bit like you wanted anyone but Rishi. So, what has changed?”

Mr Baker said: “No, that is not the case. So, when we got down to Rishi versus Liz, I felt we had two fantastic candidates to offer to the membership.

“I was backing Liz because that was the choice that Suella and the Eurosceptics made – I was proud to back Liz – but, realistically, if you look at the summer, I did not campaign very hard and that was because I was very happy with either candidate.

“The truth is, it was quite a marginal decision for me and I am very proud to back Rishi this time around.”

Mr Baker added that Mr Sunak was the candidate who could deliver a “competent, capable and professional Government the Tories could rely on” at a time when the instillation of stability was paramount to the survival and future success of the party.

He also said that “this is not the time for Boris and his style” despite being an avid supporter of the former PM over the past few years, going as far as suggesting a second Johnson premiership would be “a guaranteed disaster”.

He said: “I’m afraid the trouble is because of the (Commons Privileges Committee) vote, Boris would be a guaranteed disaster.

“There’s going to be a vote before the House of Commons on this issue of privileges, whether he will deliberately misled the house.

“In that vote it’s guaranteed there’ll be a large number of Conservatives who will refuse, as they see it, to lay down their integrity to save him, and at that moment his premiership will collapse. It’s a guaranteed nailed-on failure and we cannot allow it to happen.”

READ NEXT: Sunak ally says Rishi could forge deal with Boris as PM instead [REVEAL]

While support for Mr Sunak appears to be growing exponentially, with the former chancellor having surpassed the necessary threshold of the support of 100 MPs on Saturday, the extent of politicians backing Mr Johnson is unclear.

But Chris Heaton-Harris MP, the secretary of state for Northern Ireland, claimed that Mr Johnson had also surpassed the 100-mark. Speaking to Ms Ridge after Mr Baker, he said: “We do have the numbers… that’s not an issue.”

It comes as ex-culture secretary Nadine Dorries, writing in The Mail on Sunday, renewed efforts to garner support for Mr Johnson, saying that only the former prime minister “is a proven winner.

She added that if the former chancellor was instead chosen, “we would enter uncharted and potentially dangerous waters”.

Ms Dorries said: “Any Tory MP who votes for Rishi Sunak tomorrow will be taking a risk with the future of the party. If he is chosen, power would be transferred out of the hands of the people who exercised their choice at the ballot box less than three years ago and placed into their own very privileged and already powerful hands.

DON’T MISS: Our politicians have abandoned God and with it any moral compass [OPINION]
Boris still has unfinished business we need him back to finish the job [INSIGHT]
Boris on brink of comeback bid to be PM 52 days after he quit [REPORT]

“That would be an untenable and undemocratic position for us to be in. If that happens, I have no idea how we would be able to look voters in the eye and deny them a General Election that Labour is screaming out for.

“A Tory Party led into the next Election by anyone other than Boris Johnson would mean the country would be looking into the face of a Socialist government.”

As the Tories await the announcement of the candidates on Monday, Sir Keir Starmer has warned that the markets are spooked by “chaos” in Westminster as reports suggested the Chancellor is considering up to £20 billion of tax hikes in the highly anticipated Halloween budget.

The Labour leader also urged disillusioned Tory MPs to put the interests of the British people first, as he warned the “psychodrama” in their party is “not a game” for people struggling to make ends meet.

Sir Keir told the Sunday Times that Labour will be “the party of sound money”, claiming there are investors with “huge amounts” of cash that do not have confidence in the “shambolic” Conservatives.

The newspaper said he pointed to evidence suggesting the yield on Britain’s government bonds rose sharply after the news that Boris Johnson was returning to the UK to take soundings on another shot at No 10.

READ NEXT: Piers Morgan tells Boris Johnson to put UK ‘before bruised ego’
‘My message to the Tories…stop being idiots now’
‘Tory leadership race – The back-biting must stop now, says’
The thread of hope for Tories, says JOHN CURTICE
Tories warned of a stitch-up as race for new PM begins