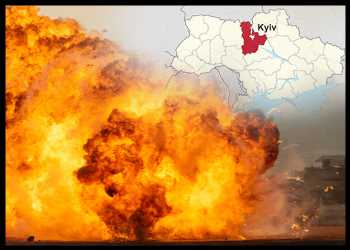 Infrastructure facilities and some houses in Kyiv were damaged in the overnight wave of drone and missile attacks from Russia.

Kyiv mayor Vitaly Klitschko said the latest round of attacks resulted in power cut in the capital city. The Russians were targeting critical infrastructure facilities in Kyiv, according to him.

“We are currently observing an increase in electricity consumption and excessive load on the grid,” Oleksii Kuleba, head of Kyiv regional military administration, wrote on Telegram. “Therefore, it is important not to forget about reasonable consumption of electricity – to use energy-intensive devices in turn and to use electricity sparingly,” he added.

The Ukrainian military alleged that Russia used Iranian-made Shahed kamikaze drones in the attacks. It claimed to have shot down dozens of drones.

Kyiv’s military issued an alert after midnight, and advised people to stay in shelters.

The latest round of Russian attack comes a day after a person was killed in multiple missile and drone attacks in Kyiv.

Meanwhile, in his New Year address to the nation, President Volodymyr Zelensky said there is a sense of unity in Ukraine, while a sense of “fear” is felt in Russia.

“Our sense of unity, authenticity, life itself – all this contrasts dramatically with the fear that prevails in Russia,” he said.