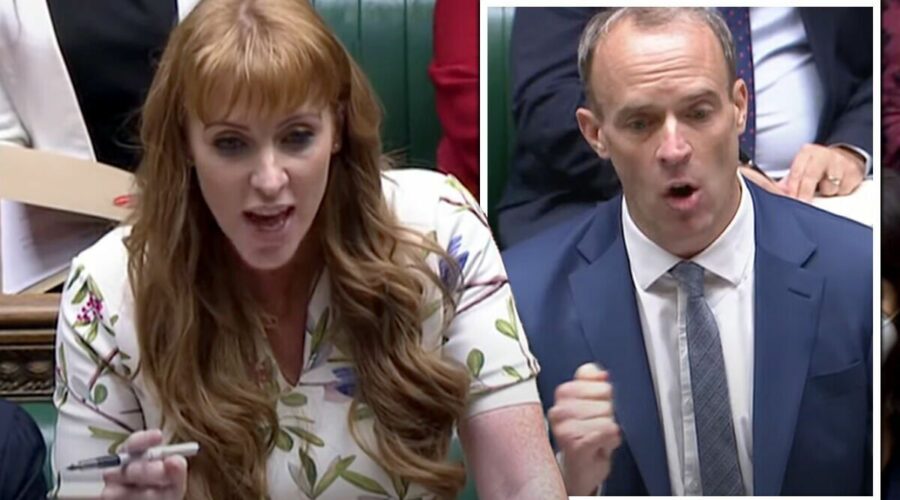 The House of Commons erupted after Deputy Prime Minister Dominic Raab shut down claims made by Angela Rayner. The Shadow Deputy Prime Minister accused the Government of “dragging its feet to protect its profits”. She warned that “every pound hidden in tax havens is a pound lost from the pockets of working families”.

But Mr Raab hit back, saying that the Conservative Party has brought unemployment down to a 50-year low.

He told MPs: “On the latest data unemployment remains at 50 year low.

“It’s half the level left by the last Labour government”.

This live blog is now closed.

Labour MP Wayne David asked the Government for a commitment that “benefits will always be enough to purchase essentials”.

Mr Raab said the Government is doing everything it can to support those reliant on food banks, citing the energy price guarantee and further measures for pensioners.

He said the Government will set out further measures at the Autumn Statement, but warned that the number one priority is “getting inflation down”.

Deputy Prime Minister Dominic Raab did not apologise for what the SNP said was a “financial crisis” following Liz Truss’s mini-budget.

SNP deputy Westminster leader Kirsten Oswald said: “Yesterday the Prime Minister was asked six different times to apologise for the disaster of the Tory mini-budget and the financial crisis it caused, and all six times he refused to say sorry.

“And now this morning people are waking up to the news that this Christmas they will be hit with the worst inflation in 41 years.

“So will the Deputy Prime Minister stand up today and do what his boss wouldn’t – will he say sorry?”

Mr Raab responded: “Clearly (inflation) is a problem. I think as chancellor and now as Prime Minister and for months, it has been this Prime Minister who has been making clear that it is the number one economic challenge we face.

“We’ve got a plan to grip inflation, to balance the books, to drive economic growth, and my right honourable friend the Chancellor will be making a statement tomorrow… which will set out our plan to take the Scottish people and everyone across the United Kingdom through these challenges.”

Jacob Rees-Mogg has hit out Labour for “hypocrisy” over the latest bullying allegations leveled at Dominic Raab.

He told MPs: “The people currently criticising him have a record of bullying second to none. A Labour MP left Parliament because of anti-semitic bullying. A distinguished BBC journalist needed bodyguards at Labour conference.”

Mr Rees-Mogg added: “Does he think, as I do, that this is at the very least hypocritical and maybe a stronger word that is not necessarily parliamentary?”

Mr Raab responded: “All I will say is I think it’s important that we all take responsibility for our actions and that’s exactly what I’ve done today”.

Deputy PM was asked if he ever entered into an NDA agreement arising from a complaint against him. Mr Raab admitted entering into a confidentiality clause after an employment issue, but said it was not an NDA and was in the time before he was a minister.

Labour MP Catherine West asked Mr Raab: “Will the government get a grip and tackle housing in my constituency and across the country”.

He told MPs: “As a former housing minister I know how important these issues are”.

Deputy PM warns there is ‘no silver bullet’ to fix migration

Sir Edward Leigh, MP for Gainsborough, asked Mr Raab: “Will the Deputy PM ensure that we remove all pull factors for illegal migration by using his new bill of rights to ensure we have the legal power to arrest, deport and detain illegal migrants and have a review for a national identity card so people don’t just vanish and never get deported?”

The Deputy Prime Minister said he “agrees” with Sir Edward’s question, but warned there is “no silver bullet” to fix the problem.

He said the “agreement that the Home Secretary made with her French opposite number will help” to chip away at the problem.

Mr Raab told MPs: “I will take it as an article of personal faith that we behave with absolute integrity and accountability.

“I am confident that I have behaved professionally throughout but immediately when I heard that two complaints had been made – I believe they were made yesterday; I was notified this morning – I immediately asked the Prime Minister to set up an independent investigation and of course I will comply with it fully.”

Mr Raab accused his opposite number of “mud-slinging”, criticising the Labour party for not having a “plan”.

Rayner calls for Dominic Raab to apologise for ‘bullying’ allegations

She said: “This is anti-bullying week, will he apologise?”

But Mr Raab responded: “I’m confident I behaved professionally throughout… I look forward to transparently addressing any claims coming forward”.

Mr Rayner then asked the Deputy Prime Minister when the Government will be appointing a new ethics advisor, in order to “drain the swamp”.

Mr Rabb told the commons that “the appointment of an ethics advisor is already under way”.

Angela Rayner has hit out the UK Government for “dragging its feet to protect their profits”.

She warned that “every pound hidden in tax havens is a pound lost from the pockets of working families”, continuing: “The G20 is also an opportunity to work together to tackle the economic challenges we all face.

“Yet as our international allies race to crack down on multinationals using tax havens to stash profits abroad, this Government is dragging its feet to protect their profits.

“We have a budget tomorrow where it’s briefed that tough choices will be impacting on families across Britain, does he accept that every pound hidden in tax havens is a pound lost from the pockets of working families?”

The Deputy Prime Minister replied: “We want people to come to this country to create the jobs and to generate the tax revenue, whether it’s non-dom status, which was stricter under this Government given the changes we made than under the last Labour government, whether it’s the Prime Minister’s approach to big tech companies…”

He added: “We have lowered the tax gap, the difference between the tax owed and the tax raised, to the lowest level, certainly lower than under the last Labour government and we’ll continue to do so.”

Dominic Raab has opened Deputy Prime Minister’s Questions by paying tribute to the victims of the missile attack in polond, expressing his “condolence”.

He “reaffirmed his solidarity with Poland”, saying the UK would work with its allies in the wake of the incident.

Raab’s first clash with Rayner since change in PM

Angela Rayner and Dominic Raab have traded blows at the dispatch box multiple times since the last general election.

Mr Raab was deputy prime minister for Boris Johnson and would stand in at PMQs when the former Conservative leader was unable to attend PMQs.

The Esher and Walton MP was then forced to sit on the backbenches during Liz Truss’s tenure at the helm.

Today will be the first time Mr Raab and Ms Rayner have debated one another since Rishi Sunak became Prime Minister and reappointed his close ally to the position of deputy.

What to expect: Unity on Ukraine before Punch and Judy politics returns

Ahead of today’s clash between Dominic Raab and Angela Rayner, Express.co.uk’s deputy political editor Dan Falvey has written about what to expect from PMQs:

“Given it has since dominated what world leaders have spoken about at the G20 in Bali, it would be odd if the deaths of the two Polish workers was not mentioned at PMQs today.

“Dominic Raab is likely to quickly address the events of the last 24 hours in his opening remarks in the Chamber, condemning Vladimir Putin’s repeated attacks on Ukraine, and for those sentiments to then be echoed by Angela Rayner when she stands up to ask her first question.

“But once both deputies have expressed their horror at Russia’s continued barbaric actions, you can expect an immediate return to the regular Punch and Judy show.

“After vowing unity in standing up to Russia, Mr Raab and Ms Rayner will probably focus exclusively on domestic matters.

“The cost of living, Britain’s new asylum deal with France, tomorrow’s Autumn Statement and bullying allegations against Mr Raab are all likely to dominate.”

Under an hour to go

There is now less than an hour until Dominic Raab stands up in the House of Commons to answer questions from MPs.

He is standing in for Rishi Sunak at the dispatch box while the Prime Minister flies back from the G20 in Indonesia.

Questions about Mr Raab’s conduct in office are expected to dominate the half hour Q&A session.