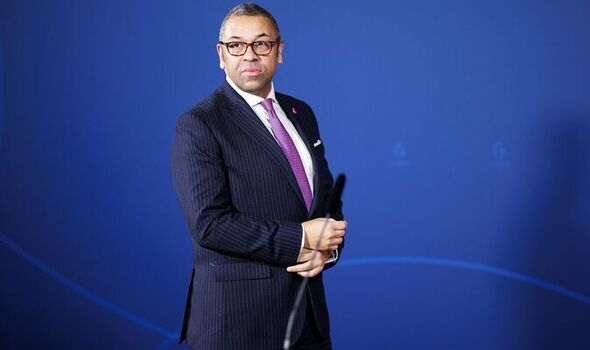 Foreign Secretary James Cleverly said ­military commanders and foreign ministers met on Wednesday to agree on fresh aid for Kyiv. It comes after a Ukrainian air defence ­missile accidentally landed in Poland, killing two people, while Kyiv’s forces faced one of the biggest artillery barrages of the war.

Nato pledged to boost air defences both in Ukraine and eastern Europe.

The Prime Minister said: “Russia rained down missile strikes on the Ukrainians and their infrastructure. That was barbaric and wrong and we shouldn’t forget that.

“None of this would be happening without the Russian invasion of Ukraine.

“The important thing is to allow the investigation to go forward and find out exactly what happened [in Poland]. There is no question this is linked to Russia continuing to escalate its illegal, unjustifiable war against Ukraine.”

Polish President Andrzej Duda said there is “absolutely nothing to suggest it was an intentional attack on Poland”.

But international allies still blame Moscow for the two deaths in the ­village of Przewodow, some 20 miles from the border. The fact it was an accident will calm fears of Nato being drawn into direct conflict with Russia.

But Mr Cleverly accused the Kremlin of trying to freeze the Ukrainians into submission by destroying energy infrastructure.

He said: “We will be looking at further air defence donations that can come from the international community and, importantly, making sure there is integration between the systems provided to Ukraine.”

The Ministry of Defence last week confirmed the UK will provide 1,000 more surface-to-air missiles. It has also sent the Sky Sabre air defence system to Poland in case the conflict spills over the border. Mr Cleverly added: “Our response will always be led by the facts.

“The only reason why missiles are flying through European skies and exploding in European villages is because of Russia’s barbaric invasion of Ukraine.

“Poland will lead the investigation to establish exactly what has happened and the UK stands ready to provide any practical or technical assistance.”

He had earlier told MPs: “I think it is wise to advise the House that at this point the full details of the incident are not complete, but earlier today Jens Stoltenberg, the Nato secretary general, said there was, and I quote, ‘no indication that this was the result of a deliberate attack’.

“He added that the incident was, and I quote again, ‘likely caused by a Ukrainian air defence missile fired to defend Ukrainian territory against Russian cruise missile attacks”.

The Prime Minister, speaking from the G20 Summit in Bali, said: “This is the cruel and unrelenting reality of Putin’s war,” he added.

Mr Sunak said he “directly confronted” Putin’s right-hand man, foreign minister Sergey Lavrov, at the G20 summit with the “illegality and brutality” of his country’s war in Ukraine.

Lavrov scarpered from the summit before the close as a series of emergency meetings were held by allies to discuss the strike on Poland.

Mr Sunak joined Nato and G7 leaders to discuss their response to the assault amid initial fears it was an escalation from Russia that could drag the West into war.

They pledged to offer their “full support” for Poland’s investigation into the incident, with preliminary assessments from US intelligence later suggesting the missile was fired by Ukrainian forces at an incoming Russian one.

At the closing press conference of the summit, Mr Sunak said the economic challenges facing the world are driven by Russia’s war in Ukraine.

He said: “The persistent threat to our security and global asphyxiation has been driven by the actions of the one man unwilling to be at this summit – Vladimir Putin.

“There isn’t a single person in the world who has not felt the impact of Putin’s war.”

Mr Sunak said they were determined to establish what happened with the missile that hit Poland.

“What we agreed this morning is that it is important to establish the facts and this is exactly what is happening as we speak. We will get to the bottom of what happened,” he said.

The crisis over the incident in Poland led to G20 leaders tearing up their carefully organised schedules.

Mr Sunak’s controversial meeting with China’s President Xi Jinping was cancelled, but Downing Street refused to say at whose request.

The Prime Minister had been expected to use the meeting to call for a “frank and constructive relationship” with Beijing while also raising its human rights abuses, Downing Street said.

But Mr Sunak had been warned by critics that he could be seen as “weak” for “drifting into appeasement with China”, after he appeared to soften his rhetoric to declare the country a “systemic challenge” rather than a “threat”.

Ukraine’s military said 77 of the more than 90 missiles fired were brought down, along with 11 drones.

But Nato allies were on red alert after a Russian-made missile landed in Poland.

The 55v5 missile, fired from a Ukrainian S-300 air defence system, seemingly strayed off course after being launched to intercept a Russian rocket.

The assessment that it was an accident will calm fears of Nato being drawn into direct conflict with Russia.

Mr Duda said: “Ukraine’s defence was launching their missiles in various directions and it is highly probable that one of these missiles, unfortunately, fell on Polish territory.

“There is nothing, absolutely nothing, to suggest that it was an intentional attack on Poland.”

The Polish President said the projectile was “most probably” a Russian-made S-300 missile dating from the Soviet era.

“It was a huge blast, the sound was terrifying,” said Ewa Byra, the primary school director in the eastern village of Przewodow, where the missile struck. She said she knew both men who were killed – one was the husband of a school employee, the other the father of a former pupil.

Another resident, 24-year-old Kinga Kancir, said the men worked at a grain-drying facility, one as a guard, the other driving tractors.

“It is very hard to accept,” she said. “Nothing was going on and, all of a sudden, there is a world sensation.”

Former Russian president and hawkish long-term ally of Putin, Dmitry Medvedev, has said that the explosion on Polish territory showed the west was moving closer to another World War.

He said: “The incident with the Ukrainian-alleged ‘missile strike’ on a Polish farm proves just one thing: waging a hybrid war against Russia, the west moves closer to world war.”