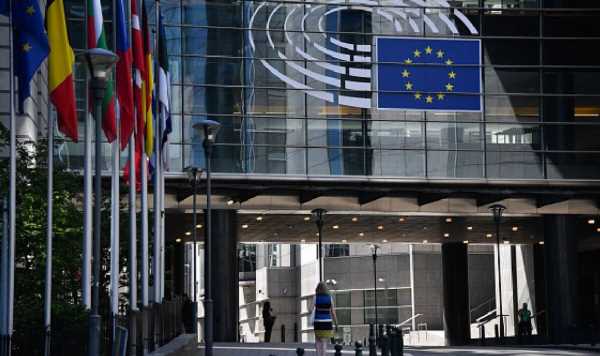 The move, opposed by the Socialist group, was voted in favour of in the Budgetary Committee on Monday. It will see EU taxpayers’ money, including funds paid by the UK via the Brexit withdrawal bill, used to renovate the Spaak building.

The plan has been in the pipeline for years and has been escalated since Roberta Metsola’s appointment as European Parliament President.

Though the estimated cost of the renovations for the building has been put at €500million (£440m), experts have warned MEPs the amount could easily reach €1billion.

Nils Usakovs, the Socialist and Democrat group’s spokesperson on the case, told Euractiv: “These projects are not bad per se, but it is the worst possible timing.”

Mr Usakovs warned the move could have a damaging effect on taxpayers’ perception of the EU institutions.

The Paul-Henri Spaak building, which was named after a Belgian founding father of the EU, was finished in 1993.

Since the 1990s, the EU Parliament has spent more than £1.8 billion on other buildings in Brussels and Strasbourg.

The renovation of the Spaak building would also cost the EU funds to find an alternative building to host the five annual plenary sessions held in Brussels.

In 2019, it emerged MEPs would splash out £250,000 on bespoke cushions for their chairs after complaining they are not comfortable enough.

Internal documents revealed the Euro MPs wanted “ergonomic” padding so they do not strain themselves while reaching to push buttons when voting on legislation.

The pricy overhaul was for chairs used in the Parliament chamber and its committee rooms in the French city of Strasbourg – where they usually sit once a month.

Officials installed 42-inch screens in the private offices of all 751 representatives in Brussels, including the then-British MEPs who would lose their jobs after Brexit.

The year before MEPs had lobbied for the demolition of the £900 million Spaak building and replaced it with a building costing £451 million.

In 2020, Eurocrats offered an army of interior designers £541 a day each to help redesign the European Parliament.

According to documents, the workers were drafted in to provide “innovative” solutions for future changes to MEPs’ offices in Brussels, Strasbourg and Luxembourg.

The role involved rearranging furniture for pampered Euro MPs and making the institution’s bland buildings look easy on the eye.

The job advert said: “You will participate in the process for selecting the best proposals by considering quality aspects of the furniture and office set up, such as aesthetic, value of design, flexibility, build, ergonomics, new materials, innovation, etc…”

Successful applicants were added to a list of approved interior designers for “a period of five years”.

Their travel expenses to the EU Parliament and hotel bills is also footed by taxpayers.