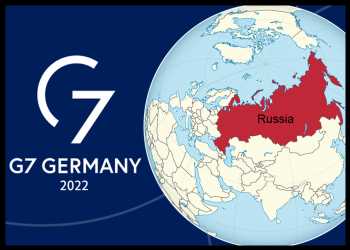 G7 leaders have announced that the seven-nation bloc will continue to impose additional economic sanctions on Russia as part of holding the Putin regime accountable for the recent missile attacks against civilian infrastructure and cities across Ukraine, leading to the death of dozens of innocent people.

The leaders of Canada, France, Germany, Italy, Japan, Britain and the United States met virtually on Tuesday to discuss the latest developments in Ukraine.

Ukraine’s President Volodymyr Zelenskyy joined the leaders at the beginning of the meeting, which was held as a video conference.

“We must respond symmetrically: when Russia attacks the energy sector and energy stability of our countries, we must block its energy sector with sanctions, break the stability of Russian revenues from oil and gas trade,” he told the leaders.

“A tough price cap is needed for the exports of oil and gas from Russia — zero profit for the terrorist state. Such steps can bring peace closer, they will encourage the terrorist state to think about peace, about the unprofitability of war,” he added.

The Ukrainian leader ruled out the possibility of any talks with his Russian counterpart Vladimir Putin.

Responding to Zelenksy’s call, the G7 leaders said in a joint statement, “We have imposed and will continue to impose further economic costs on Russia, including on individuals and entities – inside and outside of Russia – providing political or economic support for Russia’s illegal attempts to change the status of Ukrainian territory”.

The leaders warned that Russia will be held responsible for any incident caused by their actions at Ukraine’s Zaporizhzhya Nuclear Power Plant, which has been under the control of Russia for many months.

The leaders of the world’s wealthy economies promised to continue to provide financial, humanitarian, military, diplomatic and legal support to Ukraine and to stand firmly with Ukraine for as long as it takes. They also committed to support Ukraine in meeting its winter preparedness needs.

The G7 rejected the illegal attempted annexation by Russia of Ukraine’s Donetsk, Luhansk, Zaporizhzhya and Kherson regions, and demanded that Russia cease all hostilities and immediately, completely and unconditionally withdraw all of its troops and military equipment from Ukraine.