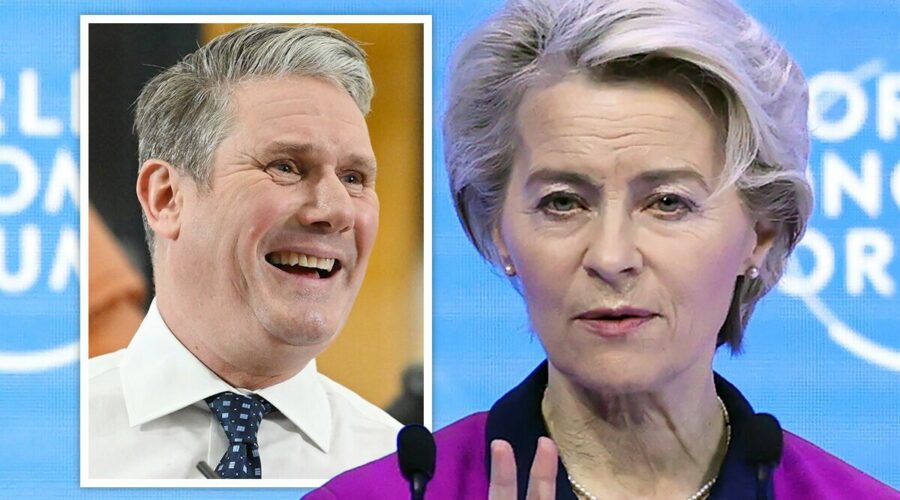 The European Union wants Sir Keir Starmer to be the UK’s next Prime Minister, despite his pledge never to rejoin the trade bloc. The Opposition leader is the Brussels favourite to take over from Prime Minister Rishi Sunak.

Fabian Zuleeg, the chief executive of the European Policy Centre, said the Conservative party has “badly damaged” “stability, reliability and confidence”, adding that he “cannot wait” for the Labour leader to become Prime Minister.

Mr Zulegg said: “We still have quite a time to go. But, in a sense, what we have seen is the collapse of the economic case for Brexit – not that there ever was one.

“At least with Labour, we would not see all the hang-ups with Europe that the Conservative Party has.

“Here in Brussels, we want stability, reliability and confidence – and that has been badly damaged by the Conservatives.

“I cannot wait for Kier Starmer to be Prime Minister. Everyone in Brussels is aching for a new relationship, and he quietly is building trust and investing in a solid relationship.”

However, he said that Brussels does not “expect miracles”, adding: “Not everything will be totally different.”

He continued: “But it will help that Starmer leads a party that is not obsessed with Europe to the extent that it has become almost a religious conviction.

“A little bit less religion and focus would be a blessing for all of us.”

Mr Scheider, who co-wrote the EU Parliament’s 2021 bill on the EU–UK Trade and Cooperation Agreement (TCA), told the i: “I’ve met Starmer and I can see he would be much better.

“He would be reliable – we have had too many breaches under the Conservatives. We know when he agrees to something, it will be settled – and this is what the EU is looking for.”

But he added: “We do not expect that Britain will come back with a Labour government – that would be too soon. The challenge is to get Brexit done by fixing the solvable issue like customs.”

DON’T MISS:
VDL vows ‘robust response’ to ‘unfair trade’ in veiled threat to UK [REVEAL]
Keegan mocks unions as most teachers did not back strikes [REPORT]
Gary Lineker calls for politicians to be paid even more [INSIGHT]

Guy Verhofstadt, veteran MEP and the former European Parliament Brexit co-ordinator, suggested that Sir Keir has his priorities in the right place, saying: “What the Western world needs now is to come together around precisely the areas Starmer mentions: science, technology, research, security, foreign affairs”.

He said “the Conservatives’ cartoon version of Thatcherism isn’t helping”.

But he criticised Sir Keir for his decision to rule out rejoining the EU.

Mr Verhofstadt said: “The devil is not in the detail – the very idea of Brexit is unworkable.

“As long as Starmer continues to rule out re-joining the single market and the EU itself, Britain will be poorer off, as is the EU.”