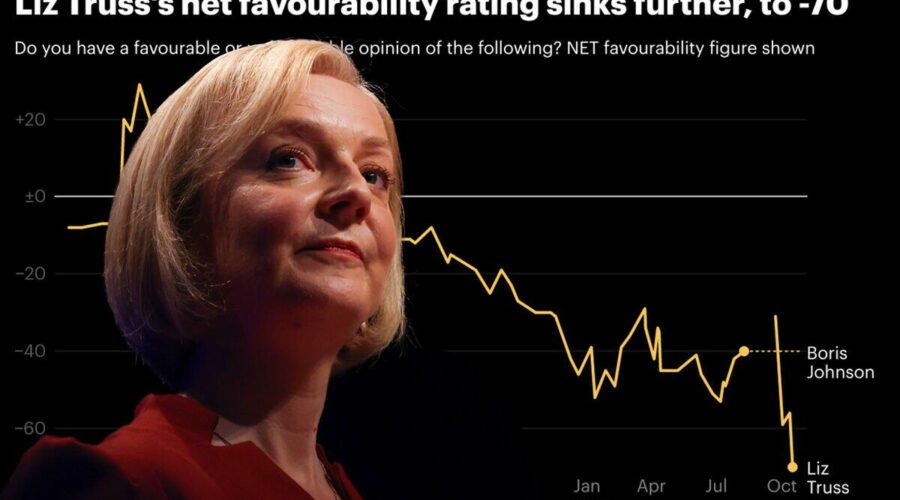 Truss apologises for ‘the mistakes that have been made’

Just 10 percent of voters have a positive view of Liz Truss, a devastating new poll indicates. A YouGov survey shows the Prime Minister has a record low net favourability rating of -70.

Even among 2019 Conservative voters, just 20 percent have a good view of the Prime Minister.

The poll results have been published as the Prime Minister faces the fight for her life to stay in No10.

POLL: Who should take over as next prime minister if Liz Truss goes?

Cabinet ministers are already understood to be exchanging messages with Tory colleagues as they look to coordinate a replacement for Ms Truss.

Meanwhile, backbenchers are also in discussions to find a unity candidate to unite the party.

One Tory MP who was first elected in 2019 told the Telegraph a consensus was starting to emerge around Mr Sunak as Prime Minister, with Jeremy Hunt staying on as Chancellor and Penny Mordaunt being made Foreign Secretary.

Mr Suank has far more support with a net favourability rating of -21.

In total 34 percent of Britons have a positive opinion of the former Chancellor, with 55 percent holding an unfavourable view of him.

DON’T MISS:
Liz Truss says sorry for ‘mistakes’ but vows to stay on as PM [UPDATE]
Tory MPs panic over ‘safe seats’ as many ‘give up hope’ [REACTION]
Liz Truss’ body language sparks concerns ‘I worry for her’ [INSIGHT]

Leader of the House of Commons Ms Mordaunt has a net favourability of -17.

Mr Hunt is supported by 17 percent of the population compared to 58 percent who view him negatively, giving him a net favourability of -40 percent.

The survey was conducted between October 14-16, before yesterday’s mini-budget U-turns were announced.

Mr Hunt said yesterday: “We will reverse almost all the tax measures announced in the growth plan three weeks ago that have not started parliamentary legislation.”

He confirmed plans to cut the basic rate of income tax from 20p to 19p would not go ahead, corporation tax would rise with from 19 percent to 25 percent from next year, and that the one year freeze in alcohol duty would be ditched.

Despite the pressure on Ms Truss increasing, last night she insisted she would still lead the Conservatives into the next general election.

“I will lead the Conservatives into the next general election. I will stay in the job to deliver for the national interest,” she said.

“I do want to accept responsibility and say sorry for the mistakes that have been made.

“I wanted to act, to help people with their energy bills, to deal with the issue of high taxes, but we went too far and too fast.

“I have acknowledged that. I have put in place a new Chancellor with a new strategy to restore economic stability.”