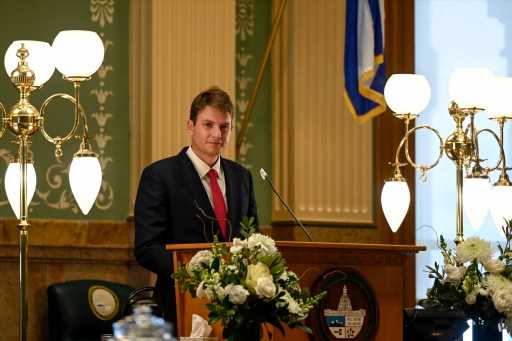 The Speaker of the Colorado House of Representatives will transition into serving as the governor’s chief of staff at the start of the year, Gov. Jared Polis announced Monday morning.

Speaker Alec Garnett, a Denver Democrat, is term-limited in the state House. He led that chamber for the last two sessions and presided over the passage of a Red Flag law that allows local law enforcement to confiscate guns from people deemed a threat to themselves or others, the law that codified the right to abortions in Colorado, and legislation that launched programs including centralized behavioral health services and free preschool.

Polis, also a Democrat, cruised to re-election in November. In an initial budget proposal in early November, he signaled there wouldn’t be any major new programs on the scale of  universal kindergarten — especially as officials launch the programs from his first term and economists warn of a possible recession at the end of an inflationary period.

Garnett will replace Polis’ outgoing chief of staff, Lisa Kaufmann, on Jan. 1. Kaufmann has worked for Polis since he first ran for Congress in 2007 and chaired his 2018 campaign for governor.

In a news release, Polis credited her as “the architect and chief strategist” for enacting free kindergarten and preschool, efforts to rein in health care costs and more. He also credited her leadership during historic wildfires and the heights of the COVID-19 pandemic.

“Together, we delivered real results for Coloradans, and I am honored to have worked shoulder to shoulder with her on behalf of our beloved state,” Polis said in a statement.

Kaufmann will continue to serve in Polis’ administration. Her new job will be as the strategic advisor for public-private partnerships in the Department of Personnel and Administration. There, she will focus on Polis’ second-term priority of expanding transit and developing transit-oriented housing, according to the news release.

On Friday, House Democrats chose state Rep. Julie McCluskie, of Dillon, as the next Speaker of the House. She will take the role when the legislative session begins in January.

14/11/2022 Politics Comments Off on Colorado Speaker of the House Alec Garnett to serve as Gov. Jared Polis’ chief of staff
Markets