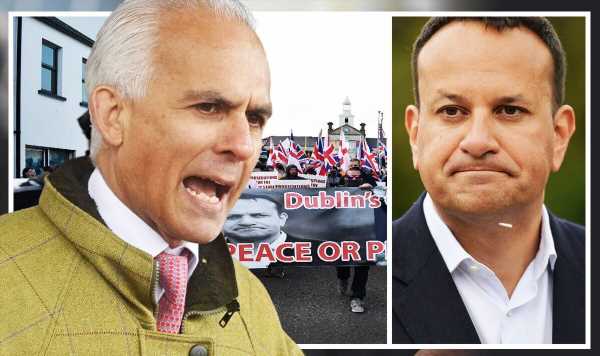 Brexiteer Ben Habib has accused Leo Varadkar of showing “false contrition” and claimed there is no change to the Irish Taoiseach or European Union’s position over the Northern Ireland Protocol. Mr Habib said while some people appear to be taking Mr Varadkar’s words at face value, his contrition is false and he simply wishes to appear reasonable.

The former Brexit Party MEP tweeted: “His contrition is false. He simply wishes to appear reasonable. There is no change in his or the EU’s position. The only concessions they might offer over the Protocol will be optical. Don’t be fooled!”

Mr Habib told Express.co.uk: “Leo Varadkar is disingenuous. His recent contrite remarks on Brexit are a deception. He was responsible in 2018 for weaponizing the Irish border issue. He has not had any sort of Damascene conversion since then.

“A year before his implicit threats of violence, in November 2017, a report was published which described how a smart border for customs checks could be created on the island. The report concluded: ‘It is possible to implement a Customs and Border solution that meets the requirements of the EU Customs legislation (Union Customs Code) and procedures, with expected post-Brexit volumes of cross-border people and goods, if using a combination of international standards, global best practices and state-of-the-art technology upgraded to a Smart Border 2.0 or similar solution.’

“Importantly, the recommendations in the report ensured the Common Travel Area, which is a cornerstone for harmony on the island, would in no way be compromised.”

He added: “The above is, of course, obvious to any sane minded individual. What is more remarkable is that the report was published by the EU.”

The 2017 study commissioned by the European Parliament provided background on cross-border movement and trade between Northern Ireland and the Republic of Ireland. It also identified international standards and best practices to create a smooth border.

Mr Habib continued: “Even though Varadkar (and the EU) knew there was no risk to peace from a customs border, he went to Brussels brandishing photos of bombed out border posts from 1972. The threat he made was clear – if a customs border, or a hard border as he called it, were to be placed on the island, violence would return.

“It was this more than anything that cowed Theresa May’s and then Boris Johnson’s governments over Brexit. May wanted to keep the entire UK in the EU’s Single Market, thereby neutering Brexit. Johnson, instead, with the Protocol, threw Northern Ireland under a bus and partitioned the United Kingdom with a border down the Irish Sea. Without a single shot fired, Johnson and Lord Frost surrendered Northern Ireland to the EU.

“If Varadkar were now genuinely contrite, he would advocate the ripping up of the Protocol. He is not. His faux humility is cover for the EU and himself insisting on the Protocol remaining in place but with (and this is his likely optical concession) customs checks across the Irish Sea made less visible.

“Varadkar and his masters in Brussels said the price of Brexit would be Northern Ireland and they are intent on that prize. Past precedent and Sunak’s supine attitude to the EU suggest the British Government will do nothing to protect the integrity of the United Kingdom.”

READ ABOUT RISHI SUNAK’S RESPONSE TO THE NHS CRISIS

The Department of the Taoiseach has been approached for comment.

Mr Habib’s comments come after Mr Varadkar conceded the post-Brexit protocol trade deal is “too strict”. The Irish leader also said he understands unionist concerns the treaty has made them feel less British.

DUP Leader Sir Jeffrey Donaldson said a fundamental change of attitude is needed in UK-EU negotiations on the protocol to reach a long-standing solution.

Mr Varadkar, who became Taoiseach for a second time in December, has become deeply unpopular within some sections of unionism and loyalism. His critics claim he was an instrumental figure in the creation of the contentious protocol.

His name and image have recently appeared in threatening graffiti and posters in loyalist areas of Northern Ireland.

Despite this, he has insisted he is looking forward to travelling to the region early this year.

The fallout over the implementation of the protocol caused devolved power-sharing in Belfast to collapse last year.

Downing Street has welcomed the shift in tone from Dublin, saying it had “always felt it was possible to enact the protocol in a way that was flexible”. Former Northern Ireland Secretary Julian Smith said a “radical political and practical solution” was required to break the deadlock.

While secretary-of-state, the Tory MP was influential in brokering a deal to get the Stormont Assembly up-and-running again in 2020 after a DUP-Sinn Fein power-sharing pact fell apart.

Disgruntlement over the Northern Ireland Protocol saw the DUP back out of that deal in February. Mr Smith tweeted: “Positive comments from Leo Varadkar on NI protocol.

“Significant work is needed to sort a radical political and practical solution to trade and broader issues with current arrangements. Creative politics from all sides, not legal cheeseparing, needed over the coming weeks.”

Prime Minister Rishi Sunak‘s official spokesman said, even before Mr Varadkar’s comments, discussions had been continuing at an “official level” in a bid to reach a resolution.

The No10 spokesman, however, said there are “not currently” any firm plans in the diary for Mr Sunak and Mr Varadkar to meet.

It was a meeting between former Prime Minister Boris Johnson and Mr Varadkar in the Wirral in 2019 which helped pave the way for a Brexit deal with Brussels.

Mr Varadkar’s latest comments, made during a pre-Christmas briefing but only published today (January 3), suggest he is keen once again to work on smoothing the Brexit process.

It follows reports ministers were planning to push back the deadline for the removal of about 4,000 pieces of EU-derived laws by December.

The Prime Minister’s official spokesman said: “There are no plans to change the 2023 sunset deadline in the Retained EU Law Bill.”

He said Mr Sunak had been clear that he wanted EU laws repealed “as quickly as possible” to ensure Britain was run by “our own rules”.