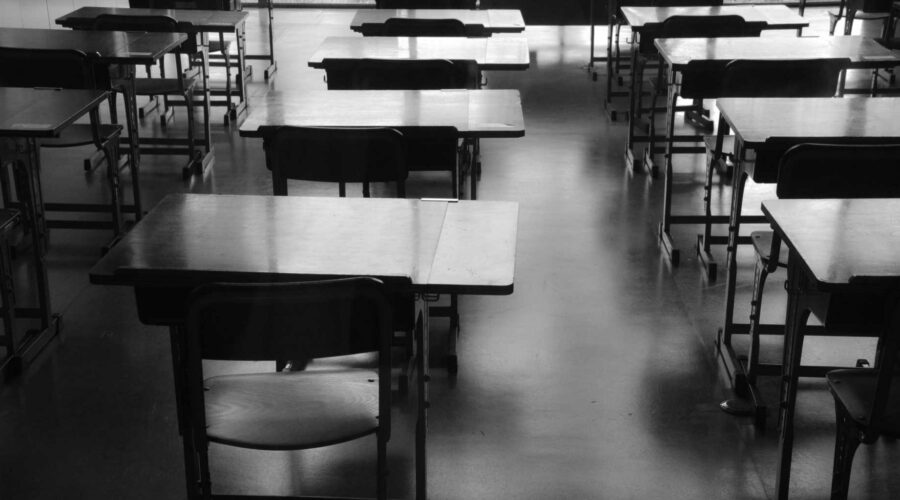 “Nearly 30 pronounced dead on the campus of Virginia Tech,” I hear on the radio as I quickly change the station to search for the Top Hits channel. I was a seventh grader in America when 32 people were murdered on the Blacksburg, Virginia, campus. Another mass school shooting in the United States? Nothing out of the ordinary. I finally found the radio station I wanted, and a T-Pain song blasted through the speakers.

My educational experience, and my relationship with mass school shootings in America, began the year I started kindergarten, in 1999. It was the year that Columbine High School in Littleton, Colorado made headlines around the world. Little did my five-year-old self know that this was only the beginning, and I would be exposed to mass school shootings for the rest of my life. From then until now, 150 more students (and counting) have been murdered in their elementary school classrooms, high school hallways, and college campuses across the country. My generation has never known the “before.” We’ve never known school without school shootings. Every chapter of our childhoods—from kindergarten to college—coincides with a tragedy that took place at a school. And that’s a horrifying fact.

My generation has never known the “before.” We’ve never known school without school shootings.

Now, as a second-grade teacher in New York City, I’m on the other side of the classroom. When I decided to leave my desk job a few years ago to become an educator, I’ll be honest, I didn’t really stop to think about what I was really signing up for. I was inspired to become a teacher by my mother, who dedicated her life to teaching for nearly 20 years. For as long as I can remember, I’ve seen education through a teacher’s lens, learning that the classroom is a space where students should feel comfortable, protected, and inspired to become who they are, with the help of selfless, warm, and encouraging teachers like my mother. At least that’s what I thought. I didn’t stop to think about what becoming a teacher in America really meant.

On May 24, as my co-teacher and I were wrapping up our curriculum and preparing for the start of summer, I read the news that 19 children and two teachers were murdered inside their fourth-grade classroom at an elementary school in Uvalde, Texas. Suddenly, it hit me. I couldn’t turn off the TV. I couldn’t change the radio station. My students and the place where I work every single day are at risk of becoming the next headline. Kids in America have always been at risk. My mom has always been at risk. And now, I am too. This has been the reality for teachers and students nationwide for over twenty years. Twenty years.

Teaching in America in the age of mass school shootings and gun violence has led us to a “new normal” as educators—a “new normal” that sort of just happened. It’s heartbreaking how calm my students become whenever a random lockdown drill is announced over the school’s PA system. They simply stop what they’re doing, walk to the “safe corner” (which, if met with an AR-15, would be anything but), silently sit in criss-cross applesauce, and wait. And wait. But what are they waiting for? I’m not even sure they know. When a member of the front desk lets us know we’re all clear, my second graders walk back to their seats and continue on with their days as if they didn’t just practice taking cover from an armed intruder. It’s ingrained in them. It’s part of their schedule. School shooting drills like these are as American as apple pie.

I, on the other hand, am experiencing an intense range of emotions. I understand that if a student is in the bathroom during this moment in time, I have to lock the door to my classroom anyway, leaving them to wait for another teacher to collect them. I know that if I forget to remove the door stopper during these drills—or god forbid, in a real-life shooting—I’d be the one held responsible for what ensued in my classroom, right before my eyes. I know I’d be the one to blame for any mistake made in those precious milliseconds. And I would become the headline on the television screen as yet another generation of kids watches at home.

School shooting drills are as American as apple pie.

I’m not the only one feeling this weight—the education community is a large one. Whether you have a teacher in your family, a teacher friend, or simply remember your favorite elementary school teacher fondly, I have no doubt that every single American knows at least one professional in the field. But have you stopped to think about what educators have become? What your family members, friends, and your favorite teacher have to live with day in and day out? We have become people who are required and expected to keep our society’s children safe and alive. Sure, we have the support, the news attention, and the I’m-thinking-of-you texts in the days after each headline breaks. But it’s just a matter of time before we’re left to bear those crippling, anxious, “what-if” thoughts on our own, yet again.

Twenty years post-Columbine, despite all of the headlines and the countless thoughts and prayers people post to social media, the heartbreak continues.

As an educator in this country, I am urging you—rather, begging you—to think about what you ask of our teachers and of our students every single day. I encourage you to look at every single mass school shooting that has happened in America since 1999 and identify the common denominator. The location doesn’t matter. Nor does the shooter. It all comes down to gun accessibility. I challenge you to wake up and realize that these circumstances are not normal, and that we are brainwashing generations of children to believe that it is. Don’t change the TV channel. Don’t turn down the radio. We need to act against gun violence, and we need to do it now.

25/07/2022 Politics Comments Off on As a Teacher in This Era of Nonstop School Shootings, I Wonder Where We Go From Here
Markets