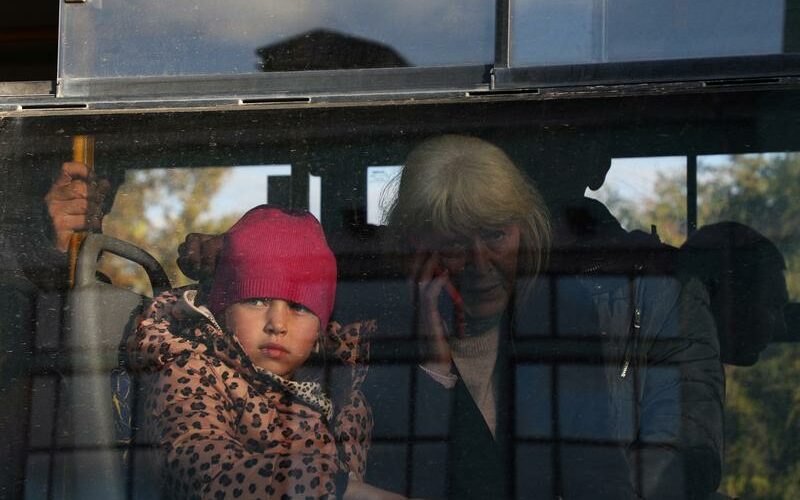 NEAR KHERSON FRONTLINE, Ukraine (Reuters) – A senior Ukrainian official predicted “the heaviest of battles” to come for the partially Russian occupied strategic southern province of Kherson and said Moscow’s military is digging in to face advancing Ukrainian forces.

FILE PHOTO – Civilians evacuated from the Russian-controlled Kherson region of Ukraine sit inside a bus upon arrival at a railway station in the town of Dzhankoi, Crimea October 24, 2022. REUTERS/Alexey Pavlishak

The region’s capital city and river port Kherson, which had a pre-war population of about 280,000, is the largest urban centre Russia still holds since capturing it early in the invasion of Ukraine eight months ago.

Ukrainian forces do not appear to have gained much ground in their counter-offensive in Kherson since early October, when Russia claimed to have annexed the province and three others, a move condemned by 143 countries at the United Nations as an “attempted illegal annexation”.

“With Kherson everything is clear. The Russians are replenishing, strengthening their grouping there,” Oleksiy Arestovych, adviser to Ukrainian President Volodymyr Zelenskiy, said in an online video on Tuesday evening.

“It means that nobody is preparing to withdraw. On the contrary, the heaviest of battles is going to take place for Kherson,” according to Arestovych, who did not say when the battle might happen.

Of the four provinces Russian President Vladimir Putin proclaimed to have annexed, Kherson is arguably the most strategically important. It controls both the only land route to the Crimea peninsula Russia seized in 2014 and the mouth of the Dnipro, the vast river that bisects Ukraine.

For weeks, officials in the Russian-backed administration of Kherson have broadcast warnings of Ukrainian forces about to attack the city and have evacuated thousands of civilians by boat to the eastern bank of the Dnipro from the west bank.

In Mykolaiv region north and west of Kherson city, artillery duels raged throughout Tuesday, according to a post from the frontline on Rybar, a pro-Russian channel on the Telegram messaging app.

In Ishchenka district north of Kherson, Ukrainian forces tried to consolidate their positions, but were forced back to earlier lines, the post said. It said the Ukrainian military was preparing for an advance along the entire length of the frontline.

A defeat for Russia in Kherson would be one of its biggest setbacks in the conflict.

A Reuters reporter in a remote hamlet near part of the Kherson frontline heard neither artillery nor shooting.

Residents in the village, which cannot be identified under Ukrainian military regulations, said they hoped Russian forces who had shelled them in the past would soon withdraw.

“You fall asleep at night and you don’t know if you will wake up,” said Mikola Nizinets, 39, as dozens of villagers waited to collect water, food packets and simple wood-burning stoves delivered by aid volunteers.

With no power or gas and little food or potable water in the area, many residents have fled, abandoning cattle to roam among expended munitions poking from the soil.

On Tuesday Russia took its case to the U.N. Security Council that Ukraine is preparing to use a “dirty bomb” on its own territory, an assertion dismissed by Western and Ukrainian officials as misinformation and a pretext for intensifying the war.

“We’re quite satisfied because we raised the awareness,” Russia’s Deputy U.N. Ambassador Dmitry Polyanskiy told reporters. “I don’t mind people saying that Russia is crying wolf if this doesn’t happen because this is a terrible, terrible disaster that threatens potentially the whole of the Earth.”

He said the evidence was in intelligence information that had been shared with Western counterparts with the “necessary level of clearance.”

Kremlin spokesman Dmitry Peskov on Tuesday repeated Russia’s allegations and said the West was foolish to dismiss them.

They follow hints from Moscow that it might be forced to use a tactical nuclear weapon against Ukraine. Zelenskiy said the dirty bomb allegation showed Moscow was planning such an attack and seeking to blame Kyiv.

Russia accused the Kyiv government of ordering two organisations to create a dirty bomb, an explosive device laced with radioactive material, without giving any evidence.

France, Britain and the United States said the allegations were “transparently false” and Washington warned Russia there would be “severe consequences” for any nuclear use.

“Russia would be making an incredibly serious mistake for it (to) use a tactical nuclear weapon,” U.S. President Joe Biden said. “I’m not guaranteeing you that it’s a false flag operation yet, we don’t know. But it would be a serious mistake.”

Russia’s defence ministry said the aim of a dirty bomb attack by Ukraine would be to blame Moscow for the radioactive contamination, which it said Russia had begun preparing for.

In an apparent response to Moscow’s allegation, the U.N. nuclear watchdog said it was preparing to send inspectors to two unidentified Ukrainian sites at Kyiv’s request, both already subject to its inspections.

Ukrainian Foreign Minister Dmytro Kuleba told reporters the inspectors would receive full access, and he called on Moscow to demonstrate the same transparency as Ukraine.

Russia’s state news agency RIA has identified what it said were the two sites involved – the Eastern Mineral Enrichment Plant in the central Dnipropetrovsk region and the Institute for Nuclear Research in Kyiv.

Since Russian forces suffered major defeats in September, Putin has doubled down, calling up hundreds of thousands of reservists, announcing the annexation of occupied territory and repeatedly threatening to use nuclear weapons.

26/10/2022 Markets Comments Off on Russia, Ukraine to fight 'heaviest of battles' in Kherson -Kyiv official
Markets