A leafy oasis in the sprawling megacity Beijing, Tsinghua University has been dubbed China’s “power factory” for producing a long line of leaders.

Perhaps the university’s most powerful alumnus, Xi Jinping, will be concerned at what has been bubbling up on his old campus in recent weeks. Crowds of students holding blank pieces of paper – a symbol of rebellion – have made the university one of the hotbeds for the anti-government protests ripping through the country. 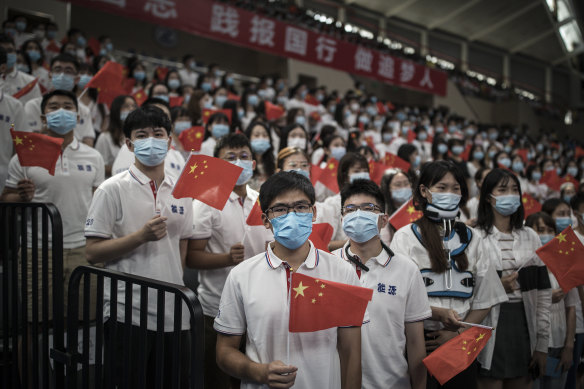 A record number of university graduates are entering a jobs market with near record youth unemployment.Credit:Getty

Frustration at Xi’s perseverance with his tough zero-COVID stance has ignited the protests but experts believe the deteriorating prospects for young people has added more fuel to the fire.

George Magnus, associate at the China Centre at Oxford University, says: “[The protests] might mark an awakening of young people’s political consciousness, seeing the Communist Party for what it is and because aspirations economically are not as good as they used to be. That’s an important part of the backdrop.

“There’s a generation that has grown up with a very politically sanitised version of its history. They don’t really know anything about Tiananmen, for example.”

Xi has sent students home not only to slow rapidly spreading COVID infections but to break up a key source of the protests by sending them back to their hometowns.

A decade ago Xi promised the country’s youth a “Chinese dream” to help match American aspirations. But a number of indicators suggest life for many young people is moving in the opposite direction.

A record number of graduates are entering a jobs market with near record youth unemployment. Housing affordability in the biggest cities has become stretched to eye-wateringly expensive levels. And the young are shunning marriage, perhaps a symptom of the financial insecurity and the male-female imbalance caused by the one-child policy.

Mark Williams, chief Asia economist at Capital Economics, says: “Beyond unemployment, there’s a lot more uncertainty about the future than previous generations of young people felt. It’s not just zero-COVID: even before the pandemic, the economy wasn’t as dynamic as before. The confidence that you’d be able to earn far more in five years than now has gone. China’s leadership has rolled out campaigns against major sectors of the economy, like the tech giants, which undermines feelings of job security.”

The Ministry of Education expects a record 11.6 million students to graduate from universities and colleges in 2023, 800,000 more than the previous year. But they are entering a labour market beset by soaring unemployment. 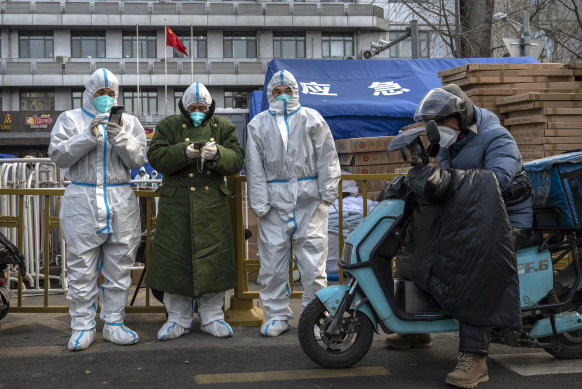 The effects of China’s harsh COVID policies will be felt long into the future. Credit:Getty

Unemployment for those aged 16 to 24 has jumped from below 10 per cent three years ago to an all-time high of 20 per cent this summer as the Chinese economy is hamstrung by zero-COVID restrictions. It has since edged down to a still historically high 18 per cent.

Jeremy Mark, a senior fellow at the Atlantic Council think tank, says: “The economic malaise can only deepen in the face of continuing anger in the streets and mixed messages from China’s rulers.”

Many of the services jobs typically taken by the young, such as in restaurants and shops, have been lost to China’s stop-start COVID restrictions. Experts say hiring has also been paused by many companies as their outlook is clouded by uncertainty over the zero-COVID policy. “There’s been a huge rise in gig-working, short-time working and informal working, as manufacturing and construction related jobs have been declining,” Magnus says. “There’s a big shift going on in terms of the structure of work.”

However, it is not just zero-COVID boosting the numbers of young jobless people. Xi’s government has cracked down on important job-creating industries, such as tech, while experts say graduates have grown up with higher career expectations, making work on a building site or factory floor less appealing.

Duncan Wrigley, chief China economist at Pantheon Macroeconomics, says that many young graduates have been employed in sectors such as finance and internet software but that many of these industries have slowed down.

“There’s an increasing share, who are well educated… and they are typically very unwilling to go into the manufacturing industry,” he says.

“There’s another challenge for well-educated young people, which is the soaring cost of living, especially in the very biggest tier one cities.”

Wrigley says that a weak jobs market means that wages for entry-level positions have often failed to keep pace with the rising cost of living in the “tier one” cities – Beijing, Shanghai, Guangzhou and Shenzhen.

With their job prospects after graduation dimming and the housing ladder becoming harder to climb, young students may feel that Xi never lived up to his promise of a “Chinese dream”.

Affordability is also a major challenge for young couples looking to get a foot on the property ladder. This economic instability facing couples and population control policies leading to more men than women has been partly blamed for marriage rates collapsing to a record low in 2021.

Fathom Consulting estimates that the house price-to-income ratio is even worse than in the US and UK, with Shanghai and Beijing the most expensive. It could take a couple on starting salaries 30 to 40 years to buy a house without family support.

“The pace of building new housing hasn’t kept up with demand and therefore prices have shot up,” says Wrigley. “Young 20-something have to opt for somewhere that’s an hour-and-a -half or two hours commute just to get somewhere affordable.”

Prices have raced ahead of incomes, particularly in China’s biggest cities, but are starting to slip off their recent highs. House prices slumped 2.4 per cent in October compared with a year earlier after a decade of rapid growth that has worsened affordability.

“Young people increasingly feel they have a mountain to climb to get some measure of economic security,” Williams says.

With their job prospects after graduation dimming and the housing ladder becoming harder to climb, young students may feel that Xi never lived up to his promise of a “Chinese dream”.