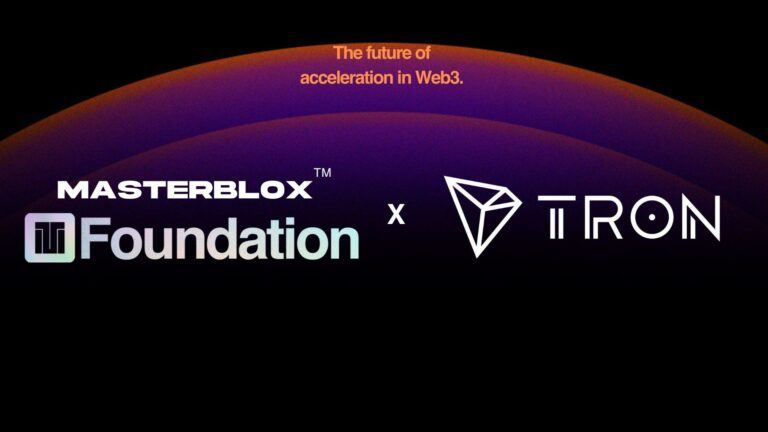 TRON DAO and MasterBlox are announcing plans to create a joint acceleration and incubation program to develop the TRON ecosystem. Leveraging MasterBlox’s expertise and the foundation set by TRON, projects that qualify for the acceleration program will have access to a closer relationship to build on the chain and many other special features. The collaboration aims to incentivize the adoption of Web3 technologies, assisting the new wave of tier 1 protocols built on the TRON network.

MasterBlox’s recently split between the Labs &  Foundation, two entities with different focuses. The lab’s side develops growth hacking & decentralized marketing activities that several big players in the market have utilized. In parallel, the foundation accelerates relationships between Masterblox clients to find the perfect match. Guiding projects throughout the funding process with tier 1 funds, launchpads, and Market Makers. The foundation also invests in the best projects with its treasury and provides supporting advisory with illustrious names across the web3 spectrum.

Purpose and Origins of the Collaboration

The collaboration started in the most organic way possible through a casual encounter in NYC between MasterBlox’s founder, Carlos Prada, and the TRON DAO team. This is not an official partnership, rather it is a collaboration between organizations with the same goal in mind, making Web3 as mainstream as possible. Both parties discussed TRON DAO’s efforts to organize hackathons in Brazil to empower the favela communities, which ended up unfolding into a larger plan.

The relationship between MasterBlox and TRON DAO was later crystalized in a meeting with a TRON DAO advisor in Paris, further expanding into the #sTRONgerTogether challenge through a connection with TRON DAO’s Director of Blockchain Innovation. From that moment on, the alignment between MasterBlox and TRON DAO regarding the importance of decentralization for Web3 became apparent, and thus the cooperation began to take shape. MasterBlox will focus on using its cutting-edge techniques in growth hacking activities to empower new developers and emerging projects. Later, these projects will be onboarded to the TRON Network and continue rewarding project owners for their creations.

Masterblox acceleration projects will not only have technical support from the TRON DAO team but will also be subject to potential grants and exposure to their strong community. Their community is the backbone of the ecosystem and represents their will to genuinely give true power to the people, embodying TRON DAO’s purpose.

MasterBlox and TRON will also develop the blockchain industry within Europe and Asia, acting as a bridge for communities from different continents to come together and discuss new ideas, partnerships, and synergies. The partnership’s goal goes beyond technological development; it’s about connecting people and communities, after all, a rising tide lifts all boats.

TRON is dedicated to accelerating the decentralization of the internet via blockchain technology and decentralized applications (dApps). Founded in September 2017 by H.E. Justin Sun, the TRON network has delivered impressive achievements since the MainNet launch in May 2018. July 2018 also marked the ecosystem integration of BitTorrent, a pioneer in decentralized Web3 services boasting over 100 million monthly active users. The TRON network has gained incredible traction in recent years. As of August 2022, it has over 107 million total user accounts on the blockchain, more than 3.7 billion total transactions, and over $11.5 billion in total value locked (TVL), as reported on TRONSCAN. In addition, TRON hosts the largest circulating supply of USD Tether (USDT) stablecoin across the globe, overtaking USDT on Ethereum since April 2021. The TRON network completed full decentralization in December 2021 and is now a community-governed DAO. Most recently, the over-collateralized decentralized stablecoin USDD was launched on the TRON blockchain, backed by the first-ever crypto reserve for the blockchain industry – TRON DAO Reserve, marking TRON’s official entry into decentralized stablecoins.

Masterblox is a Lisbon-based web 3.0 accelerator that has been providing full-stack marketing services to crypto companies since 2017. Its work as an accelerator is splintered between the foundation, which handles all the connections between the partners and the projects, and the labs, where its growth hacking methods and support services are provided to the projects within the acceleration program. MasterBlox’s labs are responsible for assisting countless DeFi and blockchain projects with marketing, market making, copywriting, social media management, and more.

07/09/2022 Crypto Comments Off on TRON DAO and MasterBlox: The Future of Acceleration in Web3
Markets