Remittance payments, fiat fears, and profit-chasing have been the three most significant drivers of crypto adoption in Latin America, according to a new report.

The seventh-largest crypto market in the world saw the value of cryptocurrencies received by individuals rocket 40% between July 2021 to June 2022, reaching $562 billion, according to an Oct. 20 report from Chainalysis.

Part of the surge was attributed to remittances, with the region’s overall remittance market estimated to have reached $150 billion in 2022. Chainalysis noted that crypto-based service adoption was “uneven, but swift.”

The firm pointed to one Mexican exchange operating in the “world’s largest crypto remittance corridor” which processed over $1 billion in remittances between Mexico and the United States in the year to June 2022 alone.

It marked an increase of 400% year-on-year and accounted for 4% of the country’s remittance market.

However, the region’s soaring inflation rates have also played a huge part in crypto adoption, according to the analytics firm, particularly in the adoption of U.S. dollar-pegged stablecoins.

“Stablecoins – cryptocurrencies that are designed to stay pegged to the price of fiat currencies like USD – are a favorite in the most inflation-ravaged countries in the region,” explained the firm.

The region has been battling with staggeringly high inflation rates, with an estimate from the International Monetary Fund revealing that inflation across the largest five Latin American countries reached a 25-year high in August to 12.1%.

This has led to regular consumers, attempting to protect themselves from their plummeting national currencies, to take and hold stablecoins in order to make their everyday purchases.

The report cited a June Mastercard survey that found over a third of consumers already use stablecoins to make everyday purchases, while Chainalysis noted that citizens from Venezuela, Argentina, and Brazil were most likely to use stablecoins for small retail transactions (under $1,000).

Venezuela in particular has seen its national fiat currency the bolívar depreciate by over 100,000% since December 2014, the firm added. 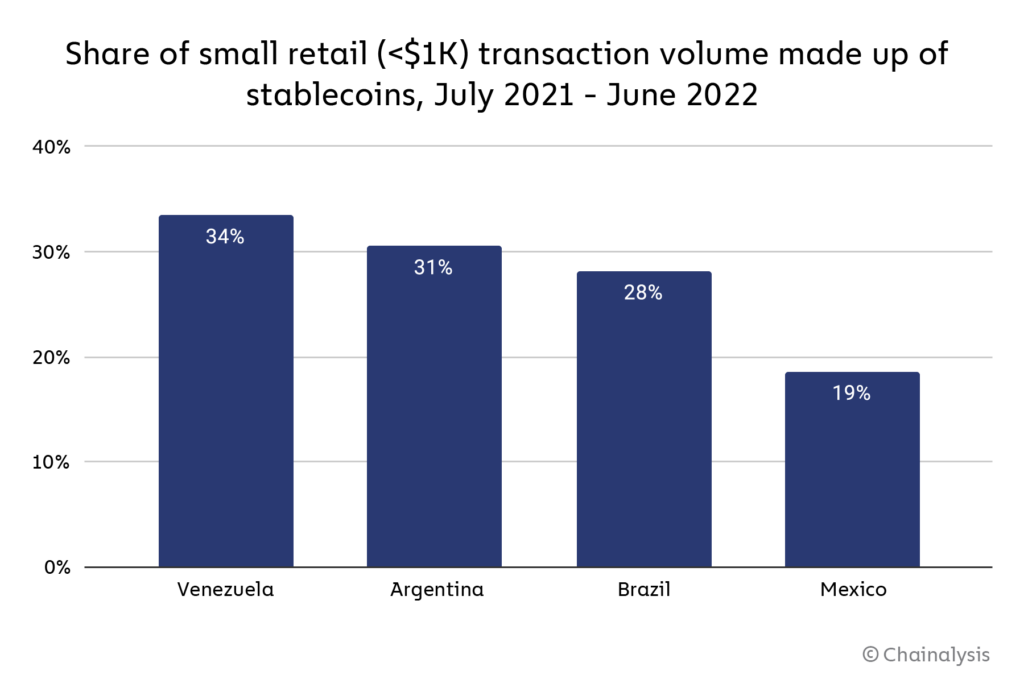 Interestingly, the report found that citizens in the larger and more developed Latin American economies were also likely to adopt cryptocurrencies as a means of profit.

Related: Latin America is ready for crypto — Just integrate it with their payment systems

Chileans were the most involved in DeFi, with over 45% of all crypto transaction volume taking place on DeFi platforms followed by Brazil at just over 30%, Brazil was the number one country in the region for crypto value received closing in on $150 billion.