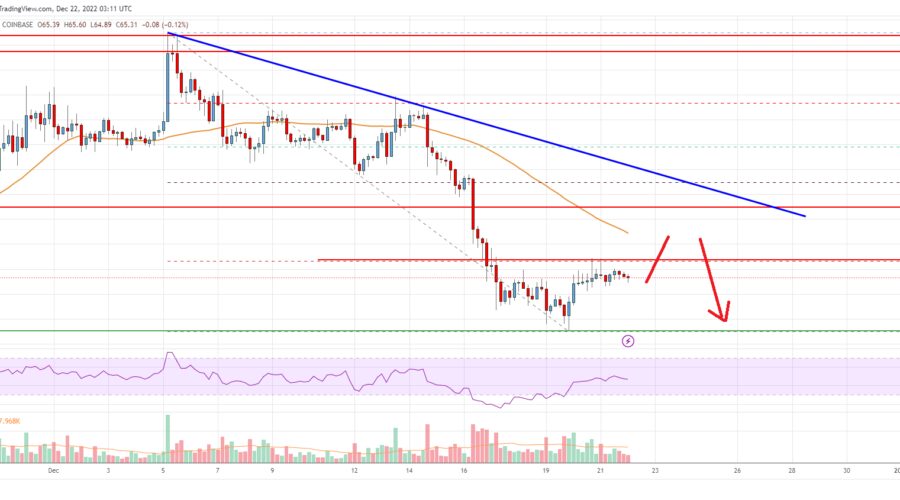 Litecoin price is struggling below $70 against the US Dollar, similar to bitcoin. LTC price could continue to decline if it stays below the $70 resistance zone.

In the past few sessions, there was a fresh decline in bitcoin, ethereum, ripple, and litecoin against the US Dollar. Earlier, LTC struggled to clear the $78 and $80 resistance levels.

As a result, there was a sharp bearish wave below the $75 level. There was a drop below the $72 and $70 levels. The decline gained pace below the $70 support and the 55 simple moving average (4-hours). The price spiked below the $65 level and tested $62.

The next major resistance sits near the $68 level and the 55 simple moving average (4-hours). The main resistance is near the $70 level. There is also a major bearish trend line forming with resistance near $71 on the 4-hours chart of the LTC/USD pair.

Looking at the chart, litecoin price is clearly trading below $70 and the 55 simple moving average (4-hours). Overall, the price could struggle to clear the $68 and $70 resistance levels in the near term.

4 hours MACD – The MACD for LTC/USD is now losing pace in the bearish zone.

4 hours RSI (Relative Strength Index) – The RSI for LTC/USD is now below the 50 level.

22/12/2022 Crypto Comments Off on Litecoin (LTC) Price Analysis: Upsides Could Be Capped Near $70
Markets