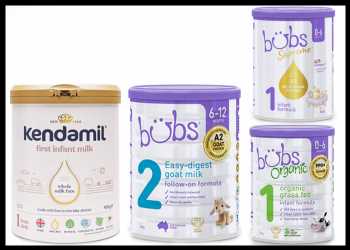 Amid the ongoing severe shortage for infant formula, the United States is getting millions of bottles equivalent of baby milk products from the United Kingdom, Australia and Mexico.

In a statement, the FDA noted that the available Kendamil First Infant Formula with Iron or Kosher formula are equal to more than 8.5 million pounds or more than 128 million full-size, 8-ounce bottles. The initial shipment will include 25,000 cases or 150,000 cans, followed by 200,000 cases or 1.2 million cans per month afterwards.

The Kosher products are expected to be sold mostly in kosher supermarkets, and also in some mainstream retailers that sell kosher milk.

The products will be available through Target, Albertsons, Kroger, Walmart and other retailers.

The FDA noted that its increased flexibilities have resulted in a total estimated quantity of 17 million cans, or about 365 million full-size, 8-ounce bottles of infant formula products from six countries to date.

These products have already started to hit the U.S. market and more will appear on store shelves over the coming weeks and months.

23/06/2022 Business Comments Off on US To Import Millions Of Infant Formula Bottles From UK, Australia, Mexico
Markets