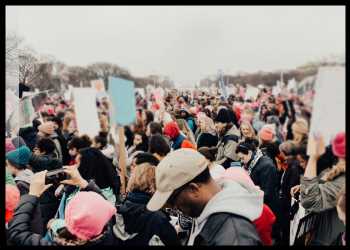 The U.S. Government has imposed sanctions on 14 individuals and two entities to hold the Iranian government accountable over its the brutal crackdown on nationwide protests.

Forty days after the tragic death of Mahsa Amini in the custody of Iran’s morality police, Iranians continue to protest in the face of brutal suppression and disruption of internet access.

The 22-year-old Iranian university student died in a hospital in Tehran on September 16 under suspicious circumstances. The Guidance Patrol, the religious morality police of Iran, arrested Amini for not wearing the hijab in accordance with government standards.

Eyewitnesses reportedly said she was severely beaten, and that she died as a result of police brutality. Iranian authorities deny this.

U.S. Under Secretary of the Treasury Brian E. Nelson said the United States is imposing new sanctions on Iranian officials overseeing organizations involved in violent crackdowns and killings, including of children, as part of its commitment to hold all levels of the Iranian government accountable for its repression.

“The United States stands with Iranian women and with all the citizens of Iran who are inspiring the world with their bravery. We will continue taking action to impose costs on those who commit violence against peaceful protesters or otherwise seek to suppress their very, very basic rights,” she told reporters.

The latest round of US sanctions target government officials who hold leadership positions within Iran’s police and prison systems and who are responsible for or complicit in serious human rights abuses.

The U.S. is designating Hossein Modarres Khiabani, the governor of the province of Sistan and Baluchestan, for his role in overseeing the violent response by security forces against peaceful protesters.

Hedayat Farzadi, the warden of Evin Prison, one of Iran’s most notorious prisons, and Seyyed Heshmatollah Hayat Al-Ghaib, who is the Director-General of Tehran Province Prisons, are among other designated officials.

Two entities involved in censorship, surveillance, and malicious cyber activity against the Iranian people were also designated. They are The Ravin Academy, which is a school that trains individuals in cyber security and hacking, and Samane Gostar Sahab Pardaz Private Limited Company, which is one of the main operators of social media filtering services in Iran.

03/11/2022 Business Comments Off on US Sanctions Iranian Officials, Entities Over Crackdown On Nationwide Protests
Markets