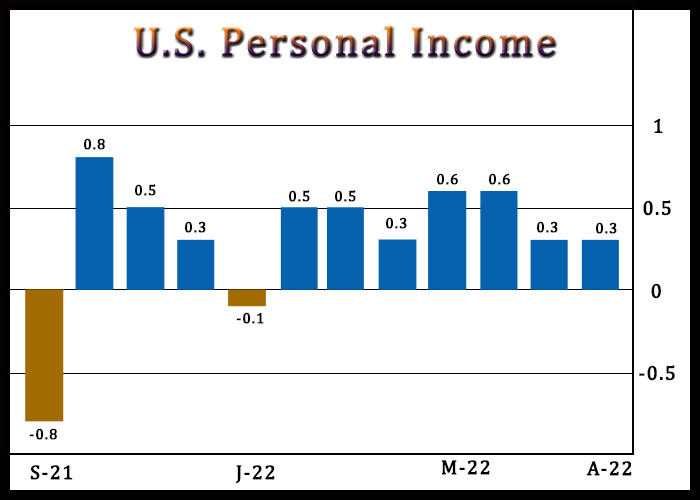 Personal income in the U.S. increased in line with economist estimates in the month of August, according to a report released by the Commerce Department on Friday.

The Commerce Department said personal income rose by 0.3 percent in August, matching the upwardly revised increase in July as well as expectations.

The growth in personal income primarily reflected increases in compensation, proprietors’ income, and government social benefits that were partly offset by a decrease in personal interest income.

Excluding price changes, real disposable income crept up by 0.1 percent in August after advancing by 0.5 percent in July.

The report showed personal spending also climbed by 0.4 percent in August after dipping by a revised 0.2 percent in July.

Economists had expected personal spending to inch up by 0.2 percent compared to the 0.1 percent uptick originally reported for the previous month.

With income and spending both climbing, personal saving as a percentage of disposable personal income was unchanged from the previous month at 3.5 percent.

“The 0.1% rise in real consumption in August, together with revisions to previous months’ data, leaves consumption on track for growth of only 0.7% annualized in the third quarter, down from 2.0% in the second,” said Michael Pearce, Senior US Economist at Capital Economics.

He added, “With the saving rate now estimated to have fallen much further over the past year, we expect consumption growth to remain weak over the coming quarters even as real incomes recover further.”

Meanwhile, a reading on inflation said to be preferred by the Federal Reserve showed the annual rate of core consumer price growth accelerated to 4.9 percent in August from a revised 4.7 percent in July.

Economists had expected the annual rate of growth in core consumer prices, which exclude food and energy prices, to tick up to 4.7 percent from the 4.6 percent originally reported for the previous month.