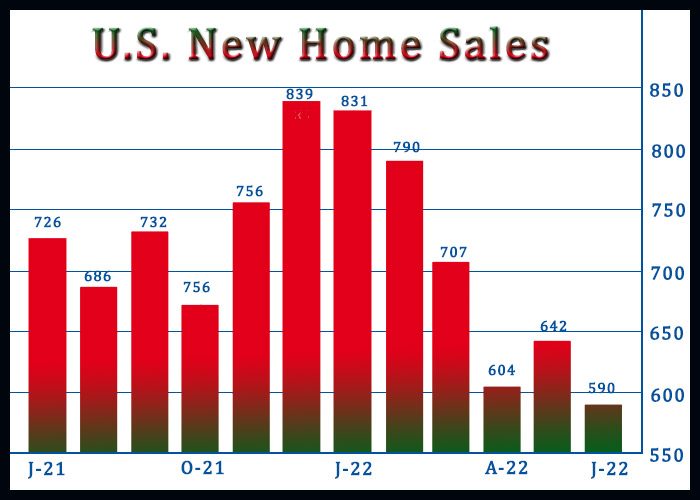 After reporting an unexpected rebound in U.S. new home sales in the previous month, the Commerce Department released a report on Tuesday showing new home sales pullback by more than expected in the month of June.

Economists had expected new home sales to tumble by 5.2 percent to an annual rate of 660,000 from the 696,000 originally reported for the previous month.

With the bigger than expected decrease, new home sales slumped to their lowest annual rate since hitting 582,000 in April 2020.

“Conditions in the market for new homes are probably weaker than the headline suggests,” said Nancy Vanden Houten, Lead U.S. Economist at Oxford Economics. “Cancellations of prior contracts to purchase homes are reportedly rising sharply and those cancellations aren’t captured in the data.”

“Our forecast is for new home sales to average just around 600k in the second half of 2022, but the June pace of sales indicates there is a downside risk to that forecast,” she added. “Further downward adjustments to prices may keep a floor under new home sales, however.”

A separate report released by the National Association of Realtors last Wednesday showed existing home sales in the U.S. tumbled by much more than expected in the month of June.

Existing home sales declined for the fifth consecutive month, falling to their lowest level since June of 2020.

02/08/2022 Business Comments Off on U.S. New Home Sales Pull Back To Two-Year Low In June
Markets