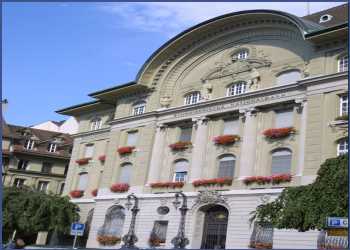 Switzerland’s central bank raised its key interest rate for the third straight meeting on Thursday and said it cannot rule further tightening in the policy rate, to counter rising inflationary pressures and spread of inflation.

The Swiss National Bank raised its policy rate by 0.5 percentage points to 1.0 percent. The outcome of the meeting widely matched expectations.

This was the third consecutive rate increase after the 75 basis points hike at the September meeting took the rate to positive zone for the first time since early 2015.

“It cannot be ruled out that additional rises in the SNB policy rate will be necessary to ensure price stability over the medium term,” the bank said in the statement.

The central bank said it is willing to be active in the foreign exchange market as necessary.

With the tiered remuneration, the SNB intends to ensure that secured short-term Swiss franc money market rates are close to the SNB policy rate.

Inflation is forecast to remain elevated for the time being. Inflation is seen at 2.9 percent this year, down from 3.0 percent estimated in September.

Inflation projections are based on the assumption that the SNB policy rate will be 1.0 percent over the entire forecast horizon.

“Without today’s SNB policy rate increase, the inflation forecast would be even higher over the medium term,” the bank said.

The bank forecast the economy to grow around 2.0 percent in 2022, unchanged from the previous forecast.

Nonetheless, weaker global demand and high energy prices would curb economic activity next year. Accordingly, GDP growth is forecast to slow notably to around 0.5 percent in 2023.

The SNB said it will continue to closely monitor developments on the mortgage and real estate markets.