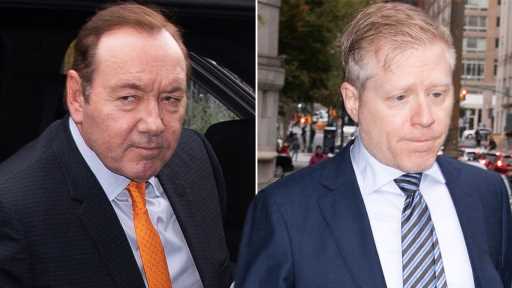 Kevin Spacey was back on the witness stand today in the trial of the $40 million sexual misconduct civil lawsuit filed by Star Trek: Discovery actor Anthony Rapp. The American Beauty and The Usual Suspects Oscar winner faced cross-examination by Rapp’s attorneys in a Manhattan courtroom a day after threw out Rapp’s claim of emotional distress as the prosecution rested.

Judge Lewis A. Kaplan began the morning by denying Rapp lawyer Richard Steigman’s motion to introduce another Spacey accuser to the jurors through a deposition the man gave that Kaplan previously had barred.

Spacey then spent the morning and early afternoon fielding questions in a cross often bogged down by defense objections. The much-accused actor, who cried on the stand Monday as he began his testimony, was composed today as he defended himself and his memory of long-ago events and insisted in court — as he had in past depositions — that his history with Rapp was “peripheral and limited.”

Steigman also asked Spacey about getting Rapp, then 14, and his friend John Barrowman — two under-age males —  into the Limelight, a New York City nightclub where Barrowman, then 19, drank alcohol. Spacey said he couldn’t remember whether he bought Barrowman, who he was attracted to, a drink. Spacey testified — as he had done on Monday — that the trio went back to his apartment, where he playfully flirted with Barrowman and pushed him on to the bed in a moment Rapp was in the bathroom.

“You were trying to seduce him,” Steigman said.

“Not in that moment,” Spacey replied.

Both Barrowman and Spacey have testified that, with Rapp present, their flirtation went no further, and the two left. Spacey has denied Rapp’s claim that earlier he had invited Rapp back to the apartment for a party days later where the attempt to seduce him occurred.

Steigman, responding to Spacey’s autobiographical testimony Monday about growing up with a neo-Nazi father, sought to question him about a claim by the actor’s older brother, Randall Fowler, that their father sexually abused him — abuse Spacey previously has said he was not aware of. Defense lawyer Chase Scolnick said it was “extremely prejudicial” to expose this claim to jurors, and Kaplan cut off that line of inquiry.

At one point the judge — with jurors out of the room — issued what sounded like a warning to Steigman. “I would hate to get the idea you’re asking questions you know there are good objections to … for the purpose of getting material in front of the jury,” Kaplan said.

Meanwhile, key Spacey attorney Jennifer Keller was back in court today after her positive Covid test threatened to derail the proceedings last week. But the judge explained that courthouse Covid protocols still were in effect, including a mask requirement for the lawyers and their clients — except, like Spacey, when they were on the stand testifying.

The case involves Rapp’s allegations that Spacey fondled and trapped the then-14-year-old on the defendant’s bed without his consent at a theater party in 1986.

Rapp’s allegations were among several that made Spacey an early focus of the #MeToo movement in 2017. The American Beauty and The Usual Suspects Oscar winner and multiple House of Cards Emmy nominee faces trial in the UK for alleged sexual assault, with that case set for June, and he is on the hook for $31 million awarded to House of Cards producers Media Rights Capital because the claims hastened the end of the show and were deemed a breach of his acting and producing agreements.

As with all the accusations against him made over the past several years, Spacey denies anything inappropriate ever occurred.

The trial is expected to wrap up this week.

Sean Piccoli contributed to this report.

How Streamers Are Supercharging Series Production In India: Analysis