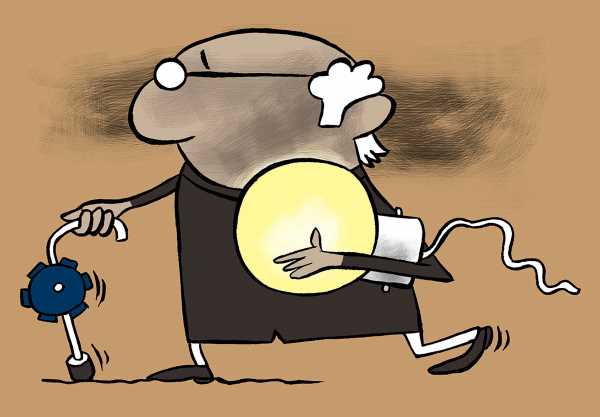 After watching or reading celebrity economists, the question needs to be asked: Why don’t old economists just fade away? By old I mean those over, say, 60.

I am not being peevish. It’s a serious question. I have been asking some young economists if they agree with me.

They said yes, because most economists over the age of 50 have no interest left in the latest trends in the intellectual side of the discipline. It’s too much work.

Instead, they prefer to rely on what they learnt in the previous 30 years. For some, they said, even that’s too much work.

So they start making predictable pronouncements on macroeconomic policy where there is huge wiggle room.

These young economists also said that nowhere else in the world are old economists treated as deferentially by the media as in India.

The media will print or broadcast anything they say as long as they take stands for or against the government.

This further reduces the incentive of the older lot to keep abreast of new developments.

I spent the last few months trying to learn what the new trends in economics are.

The range is quite bewildering. But don’t worry. I am not going to list them here.

For one thing, I don’t understand them fully myself. For another this is not the place for it.

Suffice it to say that, broadly speaking, in countries where economics is vibrant, big data is being put to extensive use for microeconomic analysis.

This is leading to very useful insights for policy.

However, the older economists to whom the government pays attention, are quite clueless about both the techniques and the outcomes of these forms of analysis.

Nor have they made much effort to learn these things.

This is especially true of Indian economists. They are simply not au fait with modern economic analysis. They are stuck in two-decade-old forms of analysis.

Any corrective in India must start by seeking the reason why big data is being applied to microeconomics.

This reason is the shift in emphasis to behavioural economics.

Basically, how individuals respond to incentives has been studied extensively for the last 60 years.

What’s now being studied is how homogeneous groups respond to them.

This requires the marriage of economics with anthropology.

Indian economists are still to comprehend this basic shift and are focused on the state and how it responds, you know, all that analysis of all those schemes and yojanas that used to emanate from the Planning Commission.

(I once called it the scheming commission in these columns and the deputy chairman got very irritated.)

The result of the neglect of behavioural economics in India is that the policy-making apparatus of the government or, for that matter, even a large corporation, has very little idea of how the potential consumers of the new yojanas — or products — will respond.

The Tata Nano was a near-perfect example of this corporate neglect. Ratan Tata knew that Indians needed a cheap car.

But beyond that his company had no clue of the sociological aspects of the lowest end of the car market, which is aspirational.

No one wanted to buy a ‘poor man’s car’. As a result, the production of the Nano was stopped even though it was a totally acceptable vehicle.

Or take tax policy. The government continues to tax individuals only on the basis of income but without reference to how the expenditure patterns of those individuals have changed.

But, unlike in the past when fixed costs — rent, food, education and health — of a family might have constituted 50-55 per cent of the income, today they constitute upward of 80 per cent.

An increasing proportion of this additional 30 per cent is transport and communication, entertainment, and energy.

These used to be variable or price elastic. Now they are not.

This has had a direct impact on the household savings rate, which has naturally been dropping for over 15 years.

If 95 per cent of your income is spoken for in one way or another — high fixed costs plus high taxes — how much can you save?

The thing is that the savings and expenditure patterns of households have a strong sociological basis, namely, the urban nuclear family. No one has studied their economics.

But our economists have not studied all this even though the data is available.

So the bureaucrats in the finance ministry have been carrying on as if nothing has changed.