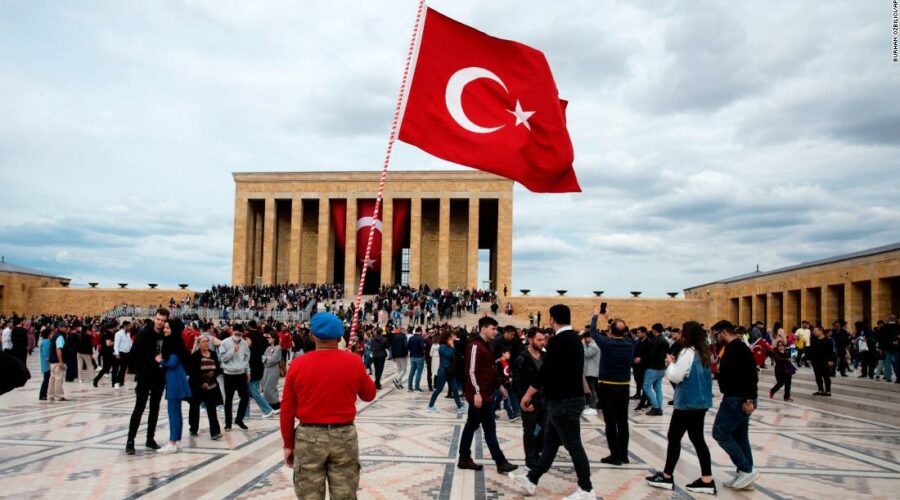 A version of this story first appeared in CNN’s Meanwhile in the Middle East newsletter, a three-times-a-week look inside the region’s biggest stories. Sign up here.

Abu Dhabi, UAE (CNN)The nation of Turkey has had it with being associated with a large bird that is best known as a symbol of the North American Thanksgiving holiday.

On Thursday, the United Nations recognized the country’s rebranding to Turkiye, pronounced tur-key-yay, in a move Foreign Minister Mevlut Cavusoglu said would “increase our country’s brand value.”
“The main reason why Turkey is changing its name is to eliminate the association with the bird,” said Sinan Ulgen, Chairman of Istanbul-based think-tank EDAM. “But also, the term is used in colloquial language to denote failure.”

For President Recep Tayyip Erdogan, who is running for re-election next year, the new name expresses the “culture, civilization and values of the Turkish nation in the best way.”

This isn’t the first time the nation has tried to change its name, he said. A similar attempt was made in the mid-1980s under Prime Minister Turgut Ozal but it never gained as much traction, he said. 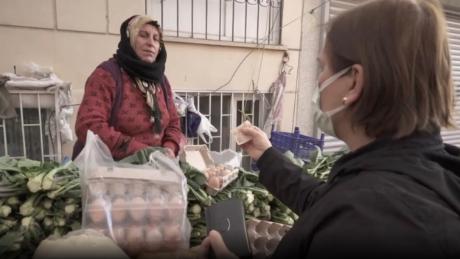 Getting poorer by the day: Turkey’s lira in freefall

There may be political motivations behind the move as Turks return to the polls next June amid a biting economic crisis.

This is “another strategy deployed by the Turkish government to reach out to the nationalist voters in a crucial year for Turkish politics,” said Francesco Siccardi, senior program manager at the Carnegie Europe think tank.
The timing of the name change is “crucial” to next year’s elections, he said. “The decision on the name change was announced last December, when President Erdogan was trailing in all opinion polls and the country was navigating one of the worst economic crises of the last 20 years.”
Erdogan’s position in the polls has dropped significantly over the years. Polls from late last year show support for the ruling AK party at around 31-33% according to Reuters, down from 42.6% during the 2018 parliamentary elections.
Ulgen however said the name change was more of a rebranding strategy to boost the country’s international standing rather than a pre-election stunt.
Turkey’s foreign trade deficit climbed 98.5% year-on-year to $6.11 billion in April, Reuters reported, citing the Turkish Statistical Institute. Annual inflation jumped to 73.5% last month, a 22-year high.
Analysts say that at times of crisis, the president tends to resort to populist moves to deflect attention from problems at home. The economic turmoil, having already brought people into the streets, has been a headache for the government.
“The new name will both distract the domestic audience from more concrete, pressing problems and offer President Erdogan another argument for his case for a stronger, more traditional Turkey,” said Siccardi. 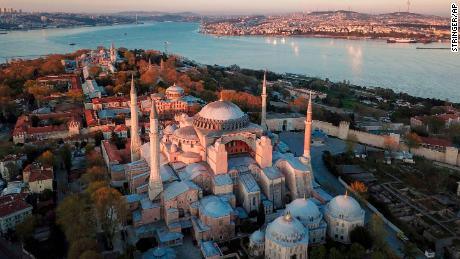 In another populist move in 2020, Erdogan issued a decree to convert Istanbul’s historic Byzantine Hagia Sofia Museum into a mosque.
“In the absence of concrete policies to handle the country’s economic and political problems, Erdogan seeks salvation in populist identity politics,” Political analyst Seren Korkmaz wrote of the move at the time. “He boosts Turkish nationalism and Islamism and targets opposition figures.”
The new name also holds symbolic value, having been adopted in 1923 after the new nation emerged from the ashes of WWI. Its adoption globally would “cement Erdogan’s place in Turkish history next to the republic’s founding father Mustafa Kemal Ataturk,” said Siccardi.

White House says Biden’s view of Saudi Arabia as a ‘pariah’ unchanged ahead of possible trip
White House Press Secretary Karine Jean-Pierre said Wednesday that US President Joe Biden’s position on Saudi Arabia “still stands,” responding to a reporter’s question on whether the president considers the kingdom to be a “pariah” due to its alleged complicity in the killing of dissident Saudi journalist Jamal Khashoggi in 2018.

Lebanese spy chief plans visit to Syria over missing US reporter
Lebanon’s intelligence chief Major General Abbas Ibrahim said he will visit Syria to resume negotiations for the release of American journalist Austin Tice, who went missing a decade ago. The jumpstart in negotiations comes after a request from US officials.

Israel tells UN nuclear watchdog it will take action against Iran if diplomacy fails
Israel will take action to block Iran’s nuclear program if diplomacy fails, Israeli Prime Minister Naftali Bennett told the International Atomic Energy Agency (IAEA) Director General Raphael Grossi on Friday. “Prime Minister Bennett made it clear that while Israel prefers diplomacy in order to deny Iran the possibility of developing nuclear weapons, it reserves the right to self-defense and to action against Iran in order to block its nuclear program should the international community not succeed in the relevant time frame,” a statement from Bennett’s office said.

"I think there is this special message of courage, a message of hope for not only women, but men and women all around the world." @Zar_Amir tells me how it felt to make history as the first Iranian woman to win best actress at #Cannes2022 pic.twitter.com/eklYMINLLw

When Iranian actress Zar Amir Ebrahimi fled her country in 2006 due to a leaked tape, she thought her career was over. But on Saturday she became the first Iranian to win the best actress award at the prestigious Cannes Film Festival.
Ebrahimi rose to fame in her native Iran, but the crowning moment of her career at Cannes came while she was in exile, for a movie that was shot in Jordan.
Directed by Iran-born Ali Abbasi, “Holy Spider” is based on the true story of a serial killer in the holy city of Mashad, Iran. It follows a journalist, Rahimi, as she covers the hunt for a construction worker who was a suspect in the murder of 16 sex workers.
Winning the award “was just like a dream,” she told CNN’s Becky Anderson on Thursday.
The movie touches on the topic of patriarchy, which Rahimi hopes will send “a message of courage, a message of hope, for not only women, but men and women all around the world.”
The win has thrust her back into the limelight in Iran and has caused a backlash. The actress told CNN that she has received around 200 threats. “The problem is that they didn’t even watch this movie, and they are judging this movie, just from a trailer,” she said, attributing the reaction to the lack of freedom of expression in Iran.
Ebrahimi fled Iran for France in 2006 after a “private video” of hers leaked, fearing arrest and lashings from judicial authorities, she said. She had to start her career afresh “in a country where I knew no one.”
“I had to run away from my country, from my home. I left my friends and family behind,” she told CNN. But she refused to let the scandal mar her career. “From exactly the day after that scandal happened to me, I just talked about cinema, I just thought that I am alive, and I need to work. And you know, I will be alive because I have cinema, because I love my work, because I love life.”
Ebrahimi said her next film will be shot in Australia. She has no plans to return to her homeland.
By Mohammed Abdelbary

“All human beings should be treated with respect and dignity and should be able to live without fear no matter who they are or whom they love.” @POTUS is a champion for the human rights of #LGBTQI persons. #Pride2022 #YouAreIncluded pic.twitter.com/gdPPBDlHZH

Kuwait: #American_Embassy
A tweet to mark Pride Month by the US embassy in Kuwait has started a firestorm on social media, prompting the Gulf nation to summon a US diplomat.
“All human beings should be treated with respect and dignity and should be able to live without fear no matter who they are or whom they love,” the embassy tweeted, in English and Arabic, on Thursday with an image of a pride flag. “@POTUS is a champion for the human rights of #LGBTQI persons. #Pride2022 #YouAreIncluded,” it said, referring to the US president.
The US embassies in Saudi Arabia, Bahrain and the UAE posted similar tweets.
The Kuwaiti embassy late on Thursday summoned the US charge d’affaires on the back of the embassy’s “pro-gay rights post,” the state-run Kuwait News Agency reported. It called on the embassy to “respect the country’s laws and regulations in force in the State of Kuwait and the obligation not to publish such tweets.”
Homosexuality is illegal in Kuwait and same-sex sexual activity is criminalized under the country’s penal code.
Kuwaiti lawmaker Abdul Aziz Al Saqobi accused the embassy of “trying to impose an agenda that is contrary to common sense and the values” of the country.

Rights activist Anwar Al Rasheed said he was shocked not by the embassy’s tweet but by the protest from the Kuwaiti government, which he said “believes it is defending virtue in the name of God.”
“It’s as if our country is not full of moral and financial corruption … and our society is angelic whose innocence the government seeks to protect,” he said to his more than 112,000 followers.

04/07/2022 Business Comments Off on Getting poorer by the day: Turkey's lira in freefall
Markets