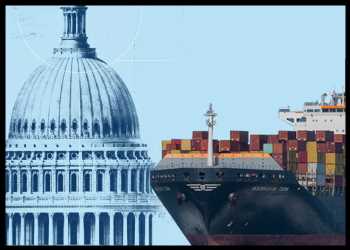 The Congress has passed the Ocean Shipping Reform Act, which will help fix supply chains and ease shipping backlogs, with bipartisan support.

Reducing bottlenecks at U.S. ports and improving conditions for agricultural exports are key to pave the way for lower costs for American retailers, farmers and consumers.

The Ocean Shipping Reform Act, which unanimously passed the Senate in March, was approved in the House by an overwhelming majority of 369-42 votes Monday. The Bill now heads to President Joe Biden’s desk to be signed into law.

The Act will level the playing field for American exporters by making it harder for ocean carriers to unreasonably refuse goods ready to export at ports.

In a statement on Congressional Passage of the Act, Biden noted that during the pandemic, ocean carriers increased their prices by as much as 1,000 percent. “And, too often, these ocean carriers are refusing to take American exports back to Asia, leaving with empty containers instead. That’s costing farmers and ranchers—and our economy—a lot of money,” he added.

Nine multinational ocean shipping companies formed three consortiums to raise prices on American businesses and consumers by more than 1,000 percent on goods coming from Asia. This allowed these foreign companies to make $190 billion in profits last year—a sevenfold increase in one year,” according to Rep. John Garamendi (D-CA), one of the co-sponsors of the House bill.

“Foreign flagged ocean carriers are playing games with American agriculture exports and our bill puts an end to it,” said Rep. Dusty Johnson (R-SD), who co-sponsored the Bill. “The Ocean Shipping Reform Act is the strongest fix to our maritime laws in a generation. Americans are facing record inflation, our bill isn’t a silver bullet, but help is on the way,” he added.

The law would strengthen the authority of the Federal Maritime Commission (FMC) by providing it with new tools to help level the playing field for American exporters and counteract anticompetitive behavior. It would also help FMC more efficiently resolve disputes between ocean carriers and shippers, while also taking actions at the U.S. Department of Transportation to alleviate strain across the supply chain.

The Ocean Shipping Reform Act will prohibit ocean carriers from unreasonably refusing cargo space accommodations for U.S. exports and from discriminating against U.S. exporters; Promote transparency by requiring ocean common carriers to report to the FMC each calendar quarter on total import/export tonnage and 20-foot equivalent units (loaded/empty) per vessel that makes port in the United States; Authorize the FMC to self-initiate investigations of ocean common carrier’s business practices and apply enforcement measures; Require ocean carriers to certify that late fees — known in maritime parlance as “detention and demurrage” charges — comply with federal regulations or face penalties; and Establish new authority for the FMC to register shipping exchanges to improve the negotiation of service contracts.

The FMC is the independent federal agency responsible for regulating the U.S. international ocean transportation system for the benefit of U.S. exporters, importers, and consumers.

The legislation earned the endorsement of the American Association of Port Authorities, which represents more than 130 port authorities across North and South America.