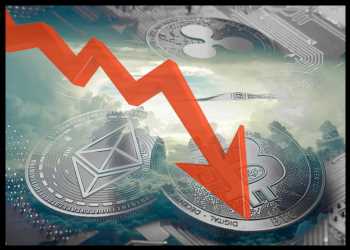 Cryptocurrencies plunged close to 3 percent overnight as sentiment was hurt following fresh reports of regulatory crackdown as well as fears of crypto contagion. Action against the Bitzlato crypto exchange as well as reports of Genesis Global planning to file for bankruptcy have sent shivers across the industry.

Overall crypto market capitalization is currently at $965 billion, versus $993 billion a day earlier.

Renewed fears of a recession that rattled sentiment in the financial and commodities market also spilled over to the digital assets market. The Dollar’s retreat too did not enthuse crypto market sentiment.

The United States Department of Justice on Wednesday arrested Russian national Anatoly Legkodymov, the founder and majority owner of Bitzlato cryptocurrency exchange registered in Hong Kong. He has been charged with conducting a money transmitting business that transported and transmitted illicit funds and that failed to meet U.S. regulatory safeguards, including anti-money laundering requirements.

The release from the Department of Justice quotes U.S. Attorney Breon Peace as saying that “Institutions that trade in cryptocurrency are not above the law and their owners are not beyond our reach”. Also, Deputy Attorney General Monaco was quoted as saying that “Today the Department of Justice dealt a significant blow to the crypto crime ecosystem. Today’s actions send the clear message: whether you break our laws from China or Europe—or abuse our financial system from a tropical island—you can expect to answer for your crimes inside a United States courtroom.”

Meanwhile, the Financial Crimes Enforcement Network (FinCEN) of the Department of Treasury has issued an order effective February 1, 2023, that prohibits certain transmittals of funds by any covered financial institution involving Bitzlato Limited, which has been determined to be of a primary money laundering concern in connection with Russian illicit finance.

FinCEN has also noted that approximately two-thirds of Bitzlato’s top receiving and sending counterparties are associated with darknet markets or scams. The report further states that Bitzlato’s top three receiving counterparties, by total amount of BTC received between May 2018 and September 2022 were: (1) Binance (2) the Russia-connected darknet market Hydra; and (3) the alleged Russia-based Ponzi scheme “TheFiniko.” Similarly, Bitzlato’s top three sending counterparties, by total amount of BTC sent between May 2018 and September 2022 were (1) Hydra; (2) Local Bitcoins, a VASP based/incorporated in Finland; and (3) “TheFiniko.”

Meanwhile reports indicate that cryptocurrency brokerage Genesis Global Capital is planning to file for bankruptcy. Genesis, part of a subsidiary of Digital Currency Group, had entered into an agreement with Gemini Trust Company, LLC to offer Gemini customers, including retail investors in the United States, an opportunity to loan their crypto assets to Genesis in exchange for Genesis’ promise to pay interest. In November 2022, Genesis announced that it would not allow its Gemini Earn investors to withdraw their crypto assets because Genesis lacked sufficient liquid assets to meet withdrawal requests following volatility in the crypto asset market. The U.S.SEC had also, earlier in the month charged Genesis Global Capital, LLC and Gemini Trust Company, LLC for the unregistered offer and sale of securities to retail investors through the Gemini Earn crypto asset lending program.

Ethereum has shed 3.7 percent overnight and is currently changing hands at $1,523.58. Ethereum has declined after touching a high of $1,602.11 earlier in the trade.

83rd ranked Kava (KAVA) is the top gainer with an 8 percent overnight rally. 37th ranked Hedera (HBAR) that gained 2.7 percent and 44th ranked Aptos (APT) that rallied 1.6 percent are the other cryptos among the top 100 that have withstood the broad-based negative sentiment.