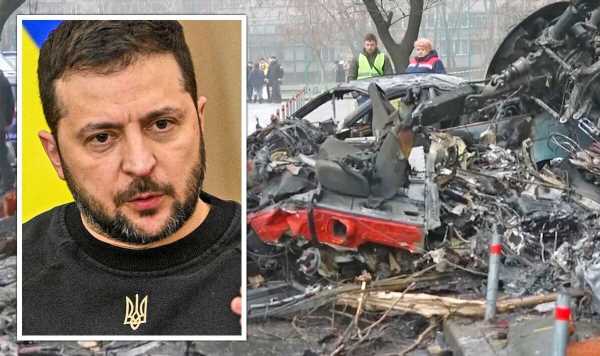 Volodymyr Zelensky has furiously claimed the helicopter crash that killed 14 people – including his Interior Minister – in Ukraine was “not an accident” while also appearing to hit back at Vladimir Putin. The helicopter crashed into a nursery in foggy weather in a residential suburb in Kyiv, killing Denys Monastyrskyi along with his ministry’s leadership and flight crew. The Interior Minister, who oversaw his country’s police and emergency services, is the most senior official to be killed since Russia invaded nearly a year ago.

This is also the second tragic event to befall the war-torn country in recent days, after a Russian missile slammed into an apartment building in Dnipro at the weekend, killing dozens of civilians.

It remains unclear if the helicopter crash was an accident or related to the war, although Ukrainian President Zelensky raged: “There are no accidents at wartime.

He was asked about the tragedy when making a speech at the World Economic Forum in Davos, and replied: “This is not an accident because it has been due to war and the war has many dimensions, not just on the battlefields.

“There are no accidents at wartime. These are all war results.”

President Zelensky also appeared to take aim at comments made earlier today by Vladimir Putin, who claimed action in its eastern neighbour was intended to stop a “war” that has raged in eastern Ukraine for several years.

He was asked by delegates in Davos what the war currently looks like to him on the frontlines, to which he replied: “It was not us who started the war but it is us who will have to end it.”

Mr Zelensky answered in Ukrainian: “I think the war doesn’t look good, which has not been good since the beginning.

“How it looks? It looks as follows: we are standing strongly in the east of our country. It is very important to know that we are strong, not just in the east but also inside the country.”

Speaking at a meeting with veterans in St Petersburg earlier today, Putin claimed Moscow has long attempted to strike a settlement to the conflict in the Ukrainian eastern industrial region of Donbas, where Russia-backed separatists have battled Ukrainian forces since 2014.

“All that we are doing today as part of the special military operation is an attempt to stop this war. This is the meaning of our operation — protecting people who live on those territories.”

Putin also visited a defence factory in the huge Russian city, and insisted he has “no doubt that victory is assured”.

He said: “In terms of achieving the end result and the victory that is inevitable, there are several things.

“It is the unity and cohesion of the Russian and multinational Russian people, the courage and heroism of our fighters, and of course the work of the military-industrial complex and factories like yours and people like you. Victory is assured, I have no doubt about it.”

Earlier today, Ukraine’s State Emergency Service said at least 14 people had died in the helicopter crash near Kyiv, including nine aboard the helicopter, and a child on the ground.

Twenty-five others were were injured, including 11 children, although early official reports gave differing numbers of casualties.

Mr Zelensky took to Telegram to describe the crash as “a terrible tragedy” on a “black morning”, writing: “The pain is unspeakable.”

The Ukrainian President’s wife, who is with him in Davos, broke into tears upon learning of the crash.