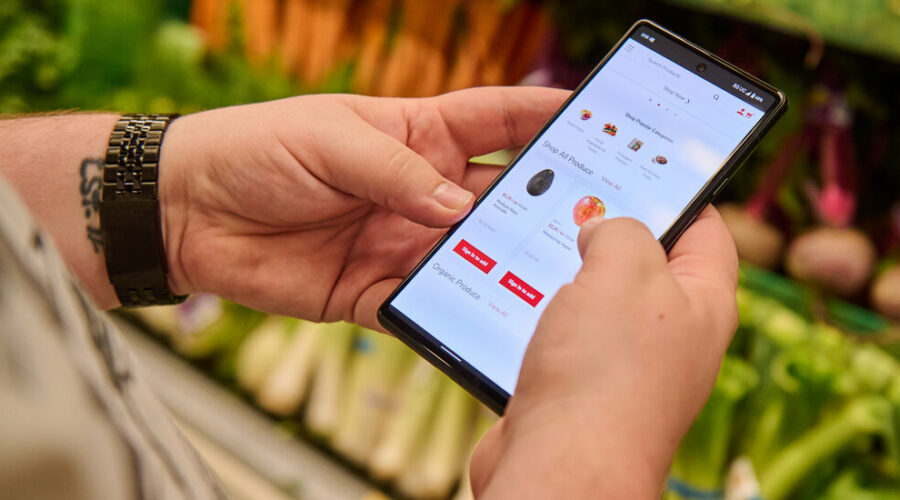 Americans are increasingly turning to “buy now, pay later” services for food and other everyday essentials. And there are signs that the practice is putting some in deep debt.

Josh Roberts didn’t think twice about taking out a loan to pay for groceries. It was early in the pandemic, and he was making $16.50 an hour working for a technology company in Cincinnati while supporting his sister and her girlfriend.

“We were just not making enough to live,” he said.

So he started buying groceries online using a virtual credit card from Klarna, a “buy now, pay later” service that allowed him to break payments into smaller installments that could be made over several weeks, with no interest.

Soon Mr. Roberts, 30, was regularly spending beyond his means on food — chicken breasts, bananas, chips, cereal. He fell behind on payments, and ended up owing more than $1,000 to Klarna, an estimated $100 of it in late fees. He already had about $11,000 in student debt, and another $2,000 in unpaid medical bills.

When pay-later services like Klarna, which was founded in Sweden, arrived in the United States about a decade ago, they were largely used for one-time, discretionary purchases like concert tickets and high-end clothing. But as inflation mounts, Americans are increasingly turning to them to finance something much more mundane and essential: what they eat.

And there are signs that the use of these services for repeated, everyday expenses like groceries and restaurant meals is pushing some users, particularly younger people who are already overextended, deeper into debt. 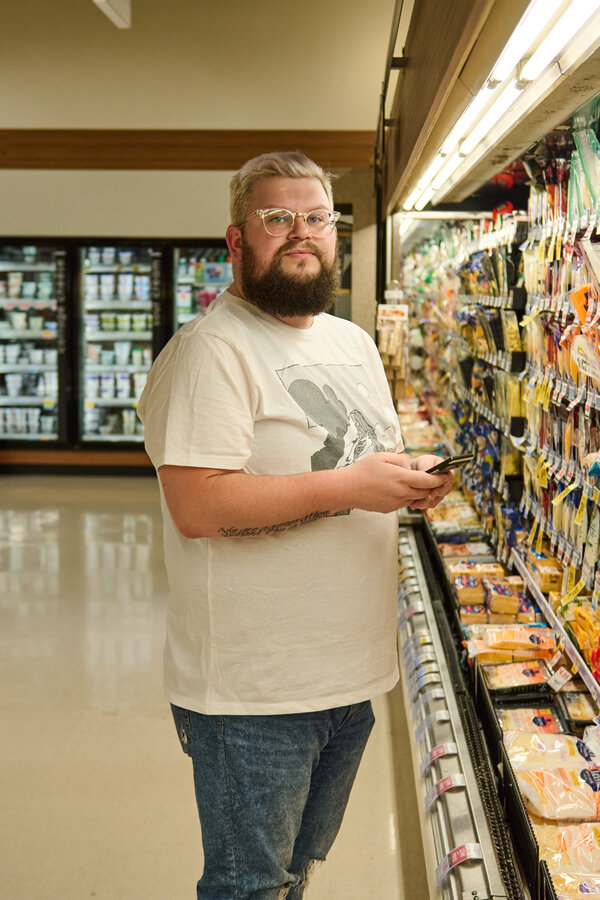 “If you are not financially literate, it is easy to abuse it and say, ‘I will just keep using it, it is free money,’” said Mr. Roberts, who has paid off his debt to Klarna and no longer uses the app.

Pay-later companies say their products are a convenient tool — like layaway plans or credit cards — to help consumers manage their finances in tough times. The services, with breezy names like Zip, Zilch and Affirm, are easy to use, with well-designed apps, websites, virtual credit cards and widgets. Shoppers can apply for them in a checkout line and be approved in minutes.

Unlike credit cards, most of the services don’t charge interest or require applicants to undergo extensive credit checks. There is usually a processing fee for each purchase, typically paid by the merchant.

Pay-later companies are already commonplace in countries like South Korea and Australia. Buoyed by inflation and the rise in e-commerce, they have quickly gained a foothold in the United States, where $45.9 billion in pay-later transactions were made online in 2021, up from $15.3 billion the year before, according to GlobalData, a data analytics company.

Food, which accounted for about 6 percent of those purchases, appears to be an important part of the growth. In the last year, Zip, a company based in Sydney, Australia, says it has seen 95 percent growth in U.S. grocery purchases, and 64 percent in restaurant transactions. Klarna reports that more than half of the top 100 items its app users are currently buying from national retailers are grocery or household items. Zilch, says groceries and dining out account for 38 percent of its transactions.

Philip Belamant, the founder of Zilch, said consumers don’t balk at swiping a credit card to buy lunch or coffee. So why shouldn’t they use a pay-later plan, with no interest, for those purchases?

“Why would you take a line of credit out to buy a sandwich?” by using a credit card, he said. “You are doing it today and paying 20 percent interest on it.”

But critics of services like Zilch say their ease of use can lull shoppers into thinking they can take on more debt with no consequences.

“Buy-now-pay-later companies have really insidiously and ingeniously kind of like marketed themselves and advertised themselves as, ‘I am just your friend, I am just here to help you out,’” said Jathan Sadowski, the author of “Too Smart: How Digital Capitalism Is Extracting Data, Controlling Our Lives and Taking Over the World.”

A pay-later purchase is essentially a loan, he said, with its own pitfalls. Some services charge late fees that can exceed the interest charges on credit cards, according to a March report by Consumer Reports. Companies aren’t always transparent about the terms of using the service, and missed payments can hurt users’ credit scores.

Pay-later users tend to be economically vulnerable. A July report by the financial services company Fitch Ratings found that they carry more debt than the general population, and that more than 41 percent of applicants have a poor credit history.

Pay-later services are less regulated than other forms of credit, and it is unclear exactly how many Americans are using them. The federal Consumer Financial Protection Bureau monitors firms that offer the loans, and in December opened an inquiry into the business practices of five companies.

But Consumer Reports says many pay-later arrangements are designed to circumvent the Truth in Lending Act, which means they aren’t subject to the same disclosure protections as credit cards.

Some credit agencies include pay-later data in their reports, and others are working toward that goal.

So a seemingly trivial decision like paying for chips using a pay-later service can end up seriously harming one’s financial health, Mr. Sadowski said. “Because I used one of these loan services to buy groceries, that might in the future impact my ability to buy a car, get a job, rent an apartment — all the things that use our credit score to assess and judge our worth in society.”

Some of the companies pointed out that most payments are made on time. At Afterpay, 98 percent of its payments in the first quarter of 2022 didn’t incur a late fee, said Alex Fisher, the company’s head of North American sales. And the service doesn’t allow new purchases by anyone who has missed a payment.

For consumers who keep up with payments, the services can be a boon as food prices soar.

“My husband and I have good jobs, we are able to pay for the things we want to pay for,” said Ambar Valdez, who works for Medicare in San Antonio. But her grocery bills have almost doubled.

Thanks to services like Klarna and Afterpay, “I don’t have to worry about groceries, and that is great,” said Ms. Valdez, 30. “I can focus on my light bill, my phone bill, my internet.”

Jessie Blum, 39, an instructional designer in Rutherford, N.J., didn’t need convincing to use a pay-later system for her everyday food purchases.

“If I wanted to pick up a coffee on the way home from somewhere and I didn’t have any money in my coffee or eat-out budget, I would push it to next month’s budget,” she said.

Others said it takes some effort to juggle multiple payment plans. Noelle Platt, 27, a stay-at-home mother of one in Kerry, N.C., uses Zip and Sezzle to buy groceries . The number of payments can pile up, she said. “We had a whole bunch going at once for some reason. It was stressful planning them out.” But she has been able to manage for now.

She first used the services at the start of the pandemic, when her husband lost his job at a coffee and tea warehouse. As the price of groceries has risen, she still relies on them.

Hannah Brown, a hair stylist in Phoenix, said her paycheck varies from week to week, so she finds it easier to pay for food in installments. But because she pays less up front, she’ll spend double what she normally would on takeout meals.

Many of her co-workers use pay-later services, she said; several have defaulted on payments, and they aren’t the ones who use the loans for clothing. They use them to buy food.

Chris Browning a financial analyst who hosts the podcast “Popcorn Finance,” said the growing use of the loans for something as basic as food, he said, signals a weak social safety net. Some states have recently ended or scaled back food-stamp benefits, even though more than 23 million Americans reported being sometimes or often food insecure in June, according to census data.

Without programs to meet people’s essential needs, “something needs to come in to fill the gap,” Mr. Browning said. “And when it is based on consumerism and capitalism, this is what fills the gap: companies coming in to make these purchases more attainable, even if there are downsides.”

Mike Taiano, a senior banking analyst for Fitch Ratings. said that what especially concerns him about pay-later loans is that consumers are often encouraged to link their credit cards to the service.

“It potentially creates a cycle-of-debt issue, where consumers are paying off one type of debt with another type of debt,” and end up paying high interest rates on their credit cards, he said.

Many of the pay-later food purchases have been groceries. But restaurants are edging into that territory. The San Francisco-based payments company Block, Inc. completed its acquisition of Afterpay in January. Restaurants are one of the largest clienteles for Square, Block’s retail technology company, and Afterpay has been added to those businesses’ point-of-sale systems.

Broad Street Oyster Company, a restaurant in Malibu, Calif., has offered Afterpay for a year, and the owner, Christopher Tompkins said 5 percent of online customers use it.

That may not sound like much, he said, but the average pay-later transaction is 40 percent higher than the average online order, and twice as much as an average in-person order.

Afterpay currently gives Mr. Tompkins a temporary discount on its processing fee. When that discount expires, he said, he might reconsider using the service.

Dennis Cantwell and Monica Wong discovered that their San Francisco restaurant, Palm City Wines, offered a pay-later option when they saw a viral tweet in late June by a customer who joked about paying for a $19 hoagie in installments. The option had come with Palm City’s point-of-sale system; Mr. Cantwell said he missed an email telling him how to opt out.

The restaurant no longer offers Afterpay. If it did, Mr. Cantwell said, he would have to raise the price of small menu items by $2 to pay the processing fees.

A hoagie, he said, is “an old-school working-class item,” he added. Financing one? “It seems so bizarre.”

Or maybe it’s not so far-fetched. Mr. Roberts, the grocery customer who got caught up in late fees, said he would rather shop for food at a dollar store than use a pay-later service.

29/08/2022 World News Comments Off on Would You Take Out a Loan to Buy This Week’s Groceries?
Markets