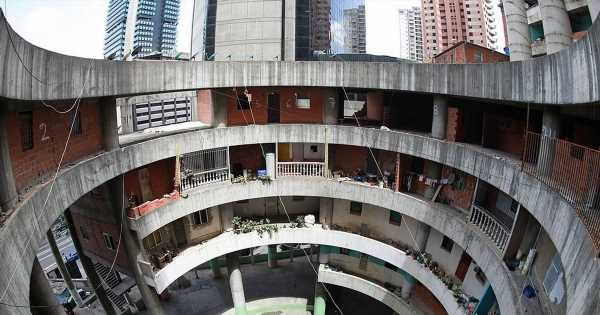 A 45-storey apartment block that was once a luxury accommodation is now the "world's tallest vertical slum".

Now known as the so-called "Tower of David", thousands of inhabitants have repurposed the former five-star hotel in Venezuela's capital Caracas into what is believed to be the world's tallest slum.

What was set to be the jewel in the crown of a brand-new financial district is now an incomplete, abandoned project from 1994 now inhabited by thousands of locals and families.

Squatters seized the site in 2007, over a decade after developer David Brillembourg died and the project was abandoned, with the site repurposed as a safe haven from the turf wars and violence outside.

The first 28 floors of the abandoned project were completely habitable for those hoping to squat there, but the further up the tower squatters went, the more trouble they ran into.

Dangerous open spaces were bricked up and basic plumbing, electrical and water systems were also fitted for those living in the Tower of David.

Floor delegates help to keep the communal corridors tidy, with rules and rotas apparently adhered to by those living in the vertical slum.

A collection pot is sent round, with inhabitants expected to pay £28 a month to stay inside of the dilapidated building.

That "condominium" fee provides 24-hour security for those living inside the Tower of David, which residents appear to appreciate when the alternative is the crime and corruption outside.

One resident, Thais Ruiz, 36, told the Independent: "There is far more order and far less crime in here than out there. Once we found a dead body on our doorstep. Now look, we can leave the door wide open."

Caracas residents do not view the tower with positivity though, as many on the outside seeing the tower block as a den of criminals, with police raids in search of kidnap victims inside the slum frequent.

Yet inside the tower, which boasts a dentist, a beauty salon and shops is a community that play dominoes and enjoy the luxury, with one resident saying: "Who needs to go to the Hilton?"

Another resident of the Tower of David said that the structure represented a "monument to a failed banking system".

At its peak, the tower is said to have housed 50,000 squatters, with figures reported by The Verge alleging the mega structure was home to tens of thousands.

Inside the tower is a display of "urban survival creativity" as worksthatwork called it, with liveable conditions pulled from the structure filled with broken windows and unfinished areas.

Rumours of imminent evictions, however, frequently plague inhabitants of the tower.

Despite former president Hugo Chávez allowing for the occupation under his presidency, current sitting politicians are actively against the form of urban squatting taking place.

Whether the inhabitants will be evicted remains to be seen, but on the inside are reports of unsafe living conditions, with staircases without bannisters and unsuitable living spaces reported.