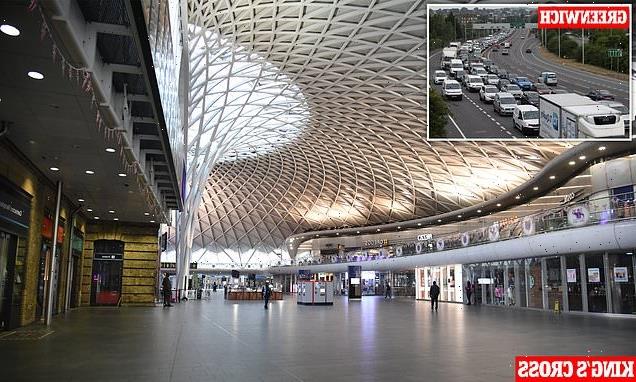 Millions of commuters face a third day of chaos across Britain today during the biggest rail strike in 30 years – as talks between the RMT union and railway bosses failed to resolve a bitter row over pay, jobs and conditions.

Members of the Rail, Maritime and Transport union (RMT) at Network Rail and 13 train operators are staging a second day of strike action, with just 20 per cent of services running and many parts of the country brought to a complete standstill.

Commuters are again jostling onto packed buses, driving or cycling to the office or school as lines will only be open between 7.30am and 6.30pm on Thursday, meaning services will start later and finish earlier than usual. Trains will mostly be restricted to main lines, with around half of the network closed.

Northern rail says it will only operate 10 per cent of services and some places will again have no trains at all after fresh talks were stalled yesterday without any new pay offer being made.

More than 50,000 members walked out on Tuesday over demands for a 7 per cent pay rise as millions battled into work, were forced to work from home or unable to earn money at all this week in a £100million-plus hammer blow to the already creaking economy.

The joint action caused travel chaos across the UK, with journeys taking longer and roads rammed with traffic as people switched to cars or buses to get to work.

Many have been forced to walk or cycle or jump in a cab, with Uber journeys surging to roughly three times the price as desperate workers scramble to get to the office.

Ahead of the strike, the Government announced plans to change the law to enable businesses to supply skilled agency workers to plug staffing gaps during industrial action.

Ministers pointed out that under current trade union laws, employment businesses are restricted from supplying temporary agency workers to cover for strikers, saying it can have a ‘disproportionate impact’.

The legislation will repeal the ‘burdensome’ legal restrictions, giving businesses impacted by strike action the freedom to tap into the services of employment businesses who can provide skilled, temporary agency staff at short notice, said the government.

Network Rail welcomed the move but Labour and unions condemned it as a ‘recipe for disaster.’ 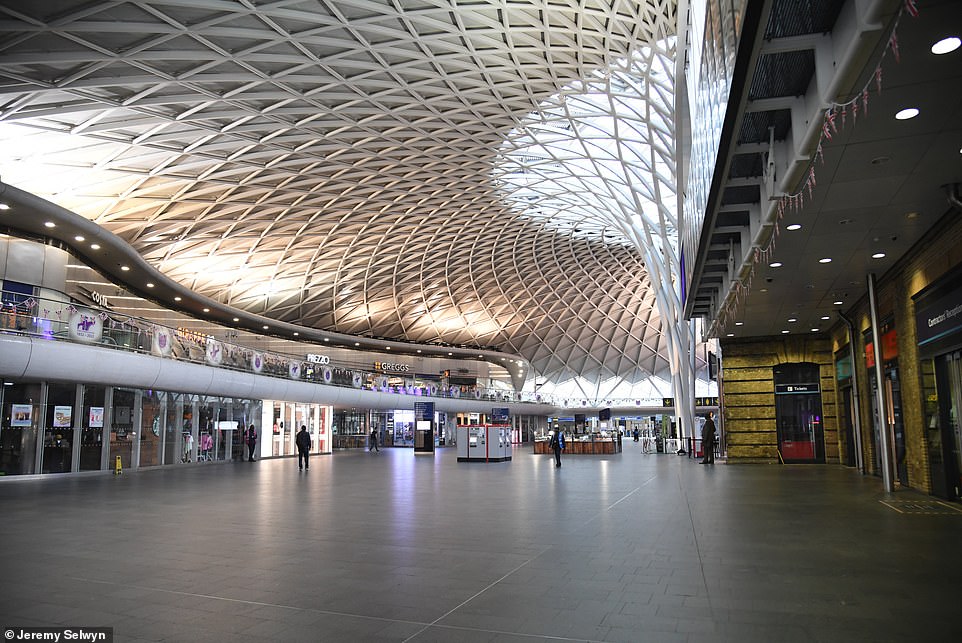 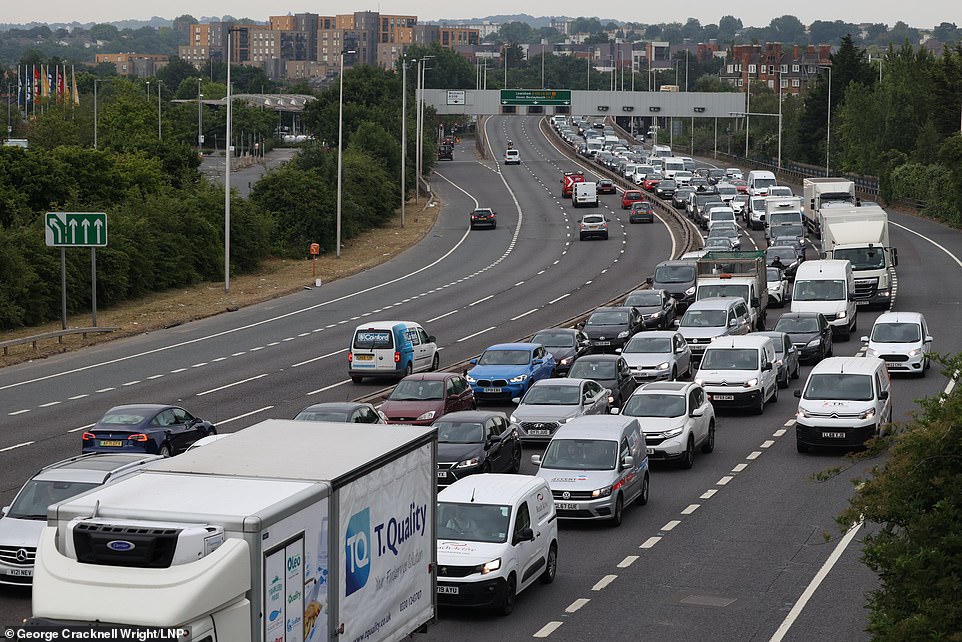 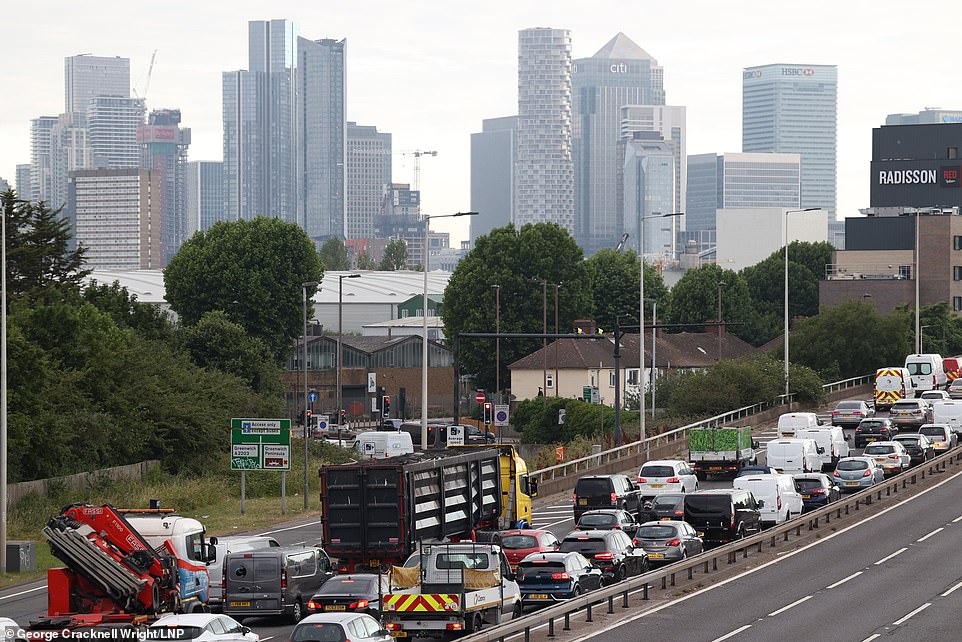 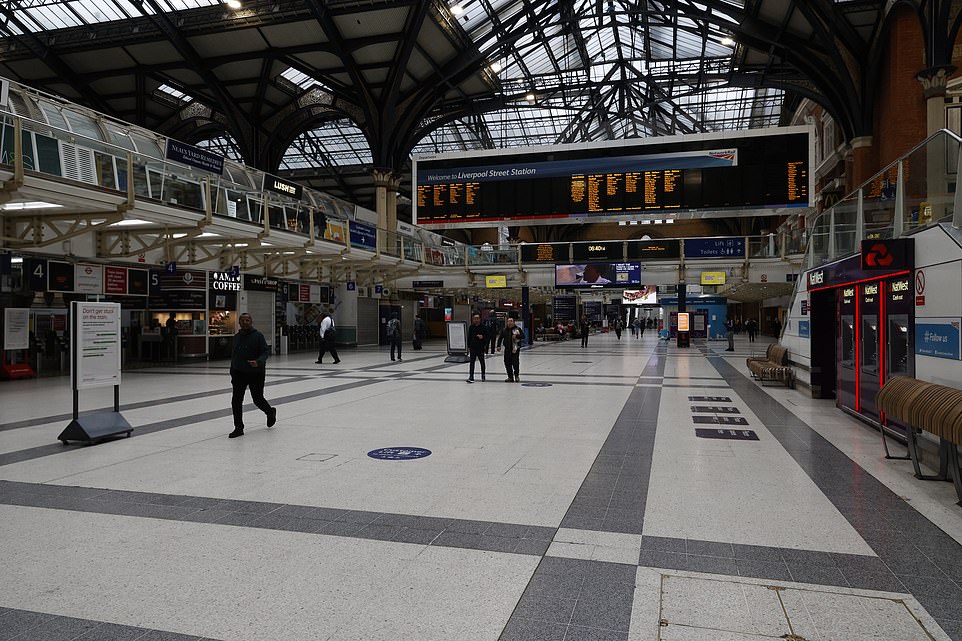 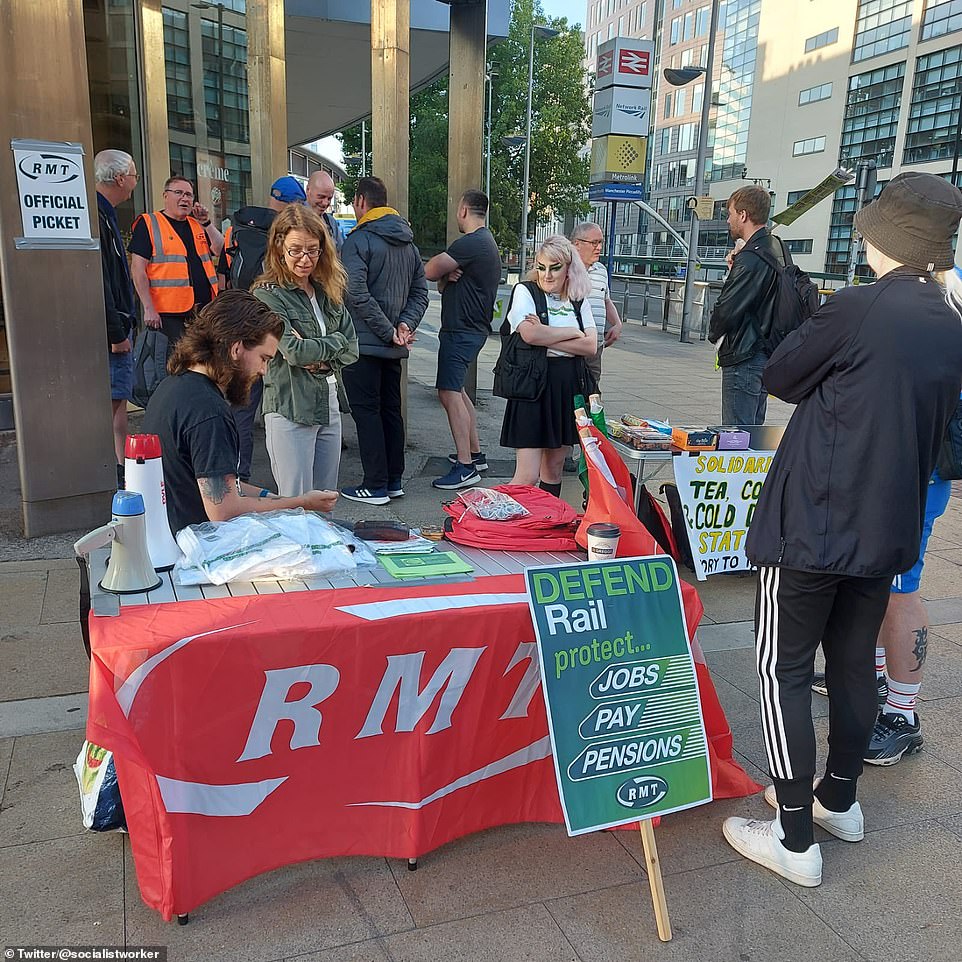 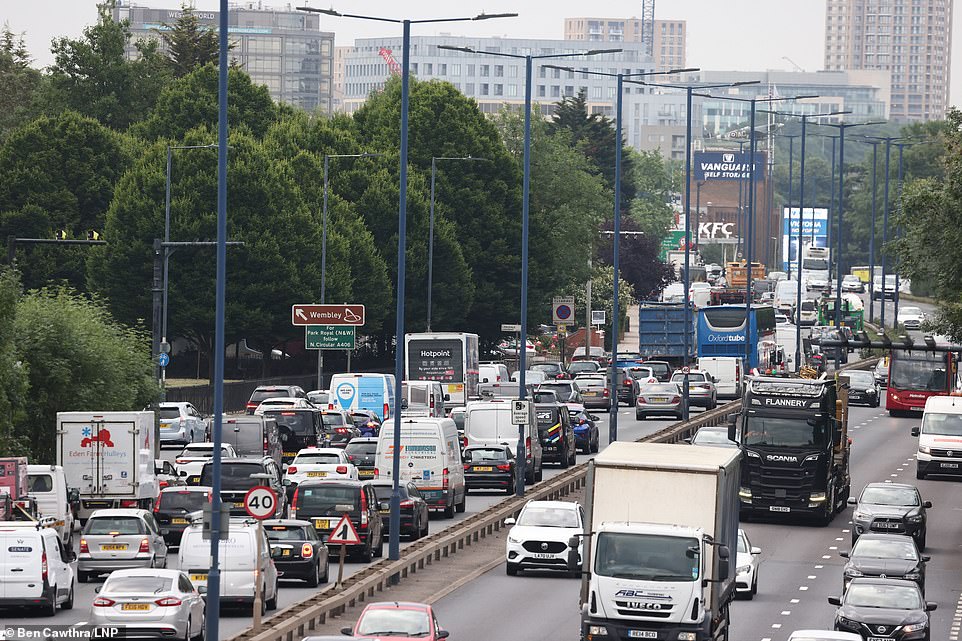 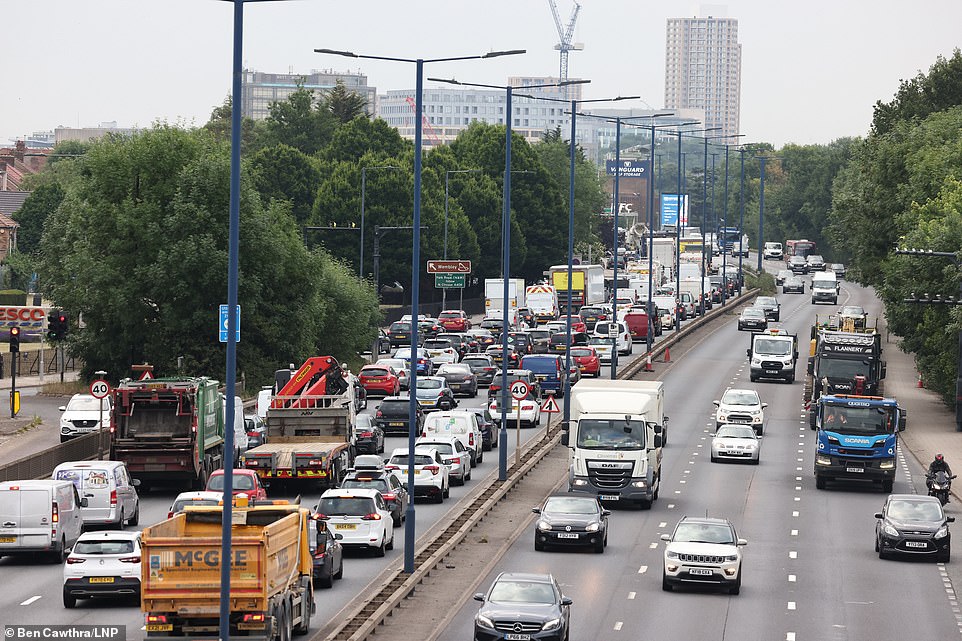 As the second day of rail strikes gets underway, heavy traffic is pictured on all three lanes on the A40 at Perivale in West London 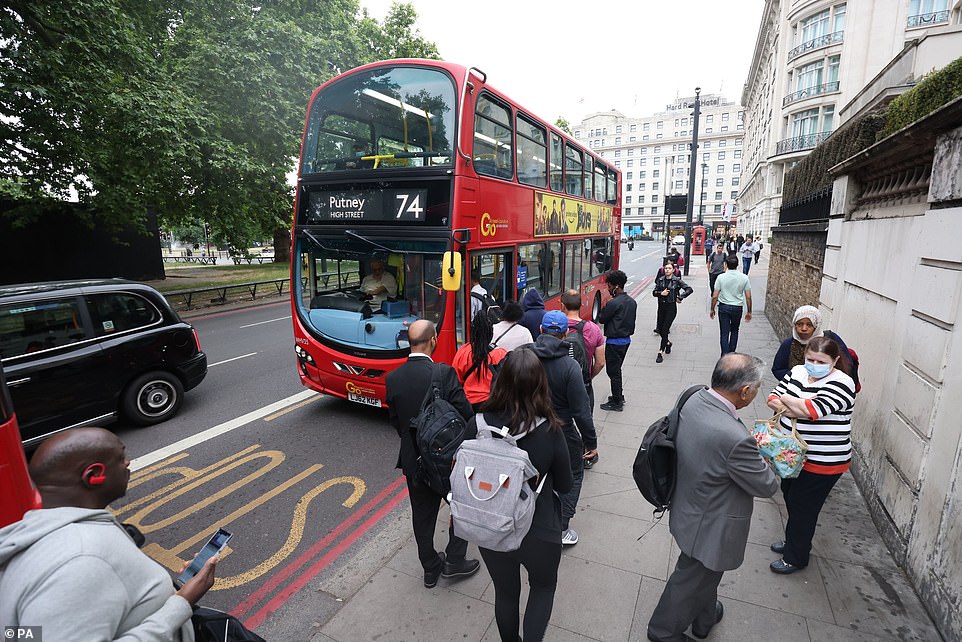 Members of the public queue for a bus near Marble Arch in London, as train services continue to be disrupted following the nationwide strike by members of the RMT union along with London Underground workers 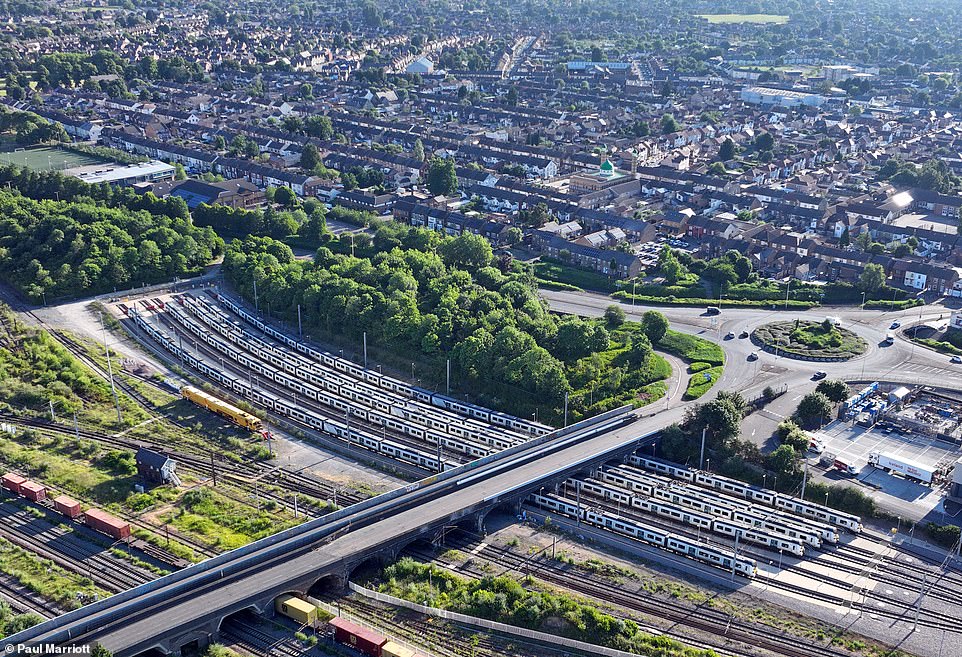 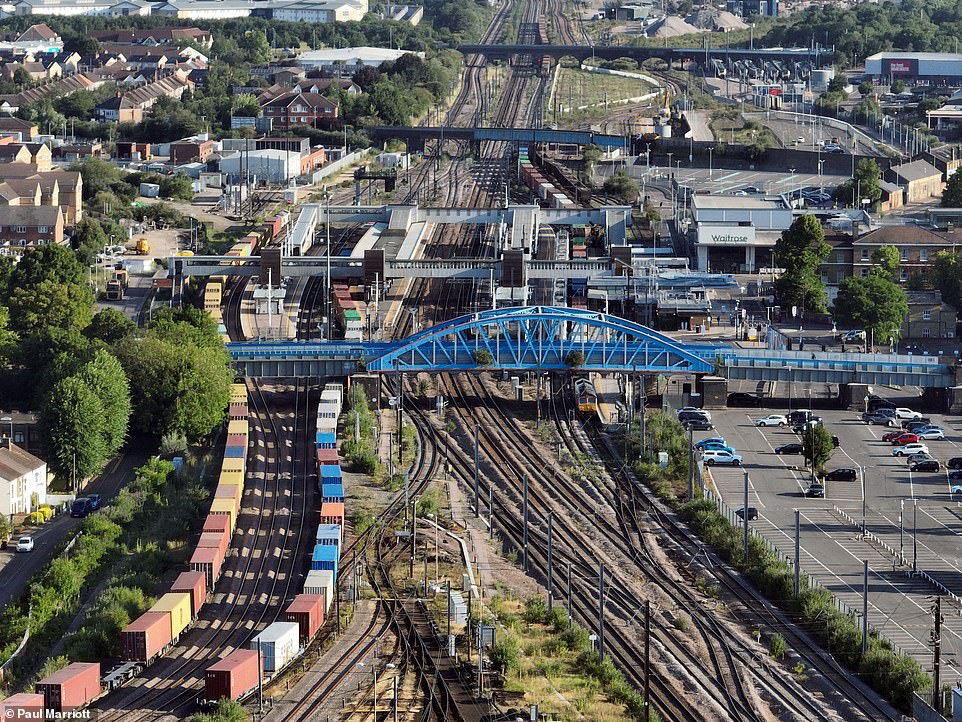 Freight trains stationery beside the East Coast main lines in Peterborough on the second day of the nationwide rail strike, which has been called by the RMT union

RMT general secretary Mick Lynch said: ‘Grant Shapps has wrecked these negotiations by not allowing Network Rail to withdraw their letter threatening redundancy for 2,900 of our members.

‘Until the Government unshackle Network Rail and the train operating companies, it is not going to be possible for a negotiated settlement to be agreed.

‘We will continue with our industrial campaign until we get a negotiated settlement that delivers job security and a pay rise for our members that deals with the escalating cost-of-living crisis.’

Mr Shapps hit back, saying the RMT claim was a ‘lie’.

Meanwhile, members of the drivers’ union Aslef on Greater Anglia will strike on Thursday in a separate dispute over pay.

The company, which is also affected by the RMT strike, advised passengers to travel only if it was necessary.

The Transport Salaried Staffs’ Association (TSSA) announced that its members at Merseyrail had accepted a 7.1% pay offer.

General secretary Manuel Cortes said: ‘What this clearly shows is our union, and sister unions, are in no way a block on finding the solutions needed to avoid a summer of discontent on the railways.

‘Rather, it is the Government who are intent on digging in their heels. Grant Shapps would be wise to start talking seriously to our union as we ballot for industrial action on our railways up and down the land.’

A Rail Delivery Group spokesperson: ‘With passenger numbers still at only 80% of pre-pandemic levels the industry remains committed to giving a fair deal on pay while taking no more than its fair share from taxpayers.

‘We can only achieve that by making improvements – like offering better services on a Sunday – that reflect the changing needs of passengers so we can attract more back.

‘We call on the RMT leadership to continue to talk so that we can secure a thriving long-term future for the railway and its workforce.

‘Our advice to passengers remains the same, only travel by rail if absolutely necessary, check before you travel and make sure you know the time of your first and last trains.’

A Network Rail spokesperson said: ‘We are disappointed that the RMT have again chosen to walk away from negotiations without agreeing a deal. We remain available for talks – day or night – and will do everything we can to avoid further disruption for our passengers.

‘As a result of this needless and premature strike, rail services will look much like they did on Tuesday – starting later in the morning and finishing much earlier in the evening (around 6.30pm).

‘We are asking passengers to please check before you travel, be conscious of when your last available train is departing, and only travel by train if necessary.’