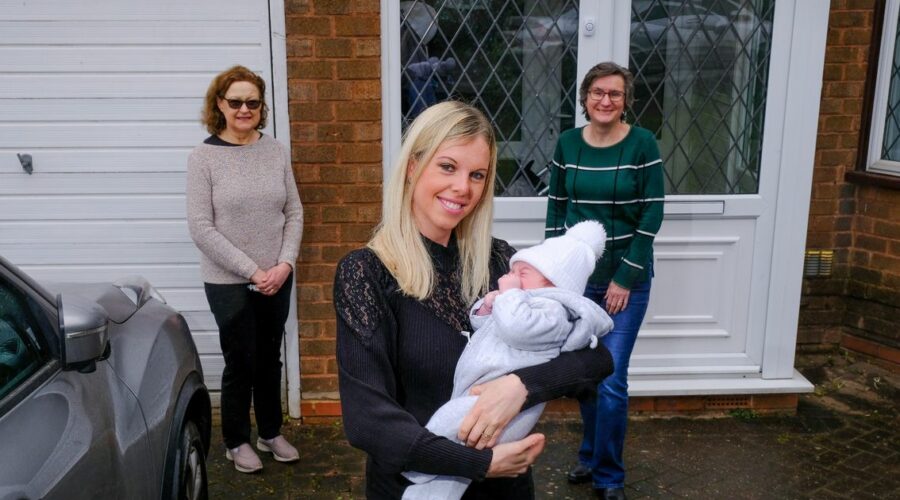 Neighbours rushed to help when pregnant Anne-Marie Duckers collapsed on her driveway while in labour.

Jane Fleming saw Anne-Marie drop to the ground and dashed to husband Adam’s aid as he phoned 999.

Another neighbour, Melinda Packham, 51, quickly followed with some towels after she heard Anne-Marie scream outside her home.

Adam delivered baby Jack on the drive after being guided by parademedics on his mobile, much to the joy and relief of both parents and neighbours.

Primary school teacher Anne-Marie said: “It was a really scary situation on a cold day.

What do you think? Have your say in comments below

“I was terrified and felt so lucky that people came to help us and reassure us.

“They will always remain special to me because of what they did for us.

“We will tell Jack as soon as he is able to understand.”

Anne-Marie’s contractions had started the evening before but hospital advice under Covid is to remain at home for as long as you possibly can.

She added: “I was literally by the car door.

“We’d had an argument as I’d told him to call the ambulance but we live right by the hospital.

“I got the feeling that I was going to give birth before we got there. I just knew I wouldn’t make it and that I needed to push.”

The paramedics arrived immediately after Jack was born, weighing a healthy 7lb 11oz.

They cut his cord and took the family, from Sutton Coldfield, Birmingham to hospital to be checked over by medical staff.

Jane said: “It was a shock, I think everybody was in shock. But it was a nice moment to be part of because it ended well.

“We are very close neighbours and they are a lovely couple.

“They brought Jack round to us the next day on the doorstep with a bunch of flowers to say thank you.”