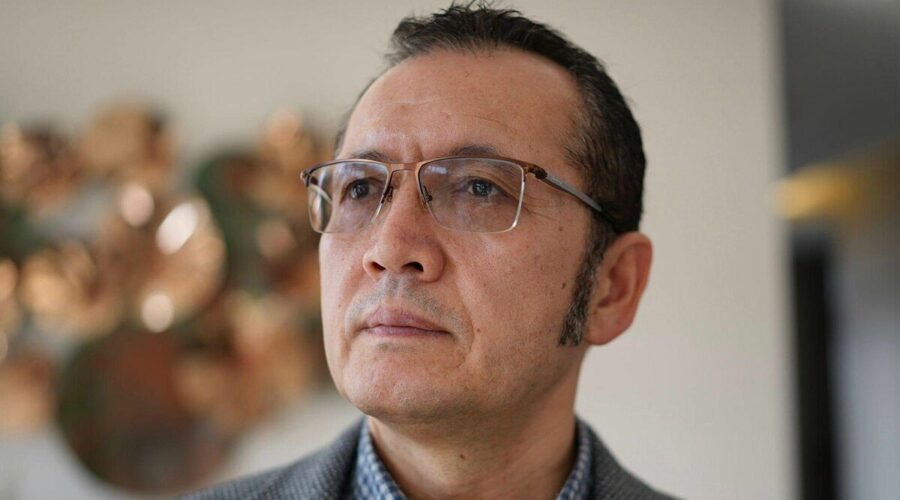 Aziz Isa Elkun is no stranger to unrest in China. For him, the protests that erupted this week against the ongoing lockdowns are reminiscent of an even more fraught period in Chinese history. “I was a student during the protests in 1989”, he told Express.co.uk, referring to the infamous demonstrations that led to the Tiananmen Square massacre, where more than 10,000 people were killed by the Chinese military. “All of the old memories of that are coming back to me.

“It’s very sad, all the sanctions after Tiananmen Square in 1989 were lifted by Western countries, they thought that China would become more open and respect humanity and democracy. In the years that have past, our politicians say China is in a ‘golden era’. How can you say this is a golden era when Uyghur people are being locked up and murdered.”

The current protests are seen as the biggest challenge to the government since those deadly demonstrations over 30 years ago. Citizens have taken to the streets across the country after an apartment fire in Urumqi, the capital of the Xinjiang region, led to the deaths of at least 10 people, who were allegedly prevented from leaving their homes due to Covid rules. This death count has been disputed by locals, who say in reality it is much higher.

Aziz grew up in the Xinjiang region, and studied in Urumqi. He says this incident is typical of the Chinese Communist Party’s brutal rule. He said: “They lie and try to deceive the world. Not just with Covid, but also for other political reasons.”

Even as a British national who has now lived in the UK for more than 20 years, Aziz has also felt the unforgiving nature of the Chinese government. He and his family are Uyghurs, a Turk ethnic group native to the Xinjiang region in western China. They have been targeted by rulers in Beijing due to their Islamic faith.

The Chinese government has been accused of crimes against humanity and genocide against the minority group. Human rights groups say more than one million Uyghurs have been detained in what Beijing calls ‘re-education camps. Survivors have told stories of awful abuse taking place there.

Aziz believes that the persecution faced by the Uyghur population is now moving across China via Chinese President Xi Jinping’s Covid lockdown rules.

He said: “We cannot simply say this is about Covid. First, China is an oppressive state. It’s about the political struggle in China because Xi Jinping is trying to control everything. He wants to be a Chinese king or emperor, and he has crushed all of his opponents.

“The lockdowns and the Covid rules protect the political power of Xi Jinping to crack down on political opponents and impose total oppression and terror onto the Chinese population.”

“The United Nations and Western countries accept that China is committing crimes against humanity against the Uyghurs. Xi Jinping used the genocide as a test, now he will extend oppression to the whole of China in the name of Covid.”

Aziz has felt this persecution personally. He hasn’t spoken to his mother since 2017, shortly after his father’s death, and doesn’t even know if she is still alive. Having been a vocal critic of the Chinese Communist Party, he has been blocked from contacting his loved ones back home.

“I feel heartbreak all of the time. I did everything I could”, Aziz said. “My mother, I assume, is now over 81 years old and she has no children to look after her. I hope she is alive. I can’t get any news from the Chinese government. I wrote to them, I did everything I could but they didn’t respond. This is the true face of Xi Jinping, he is very inhumane.”

When Aziz’s father died in 2017, he was unable to attend the burial. He has only managed to visit his father’s grave via Google Earth, but while doing so discovered the burial site had been flattened. China has been accused of destroying Uyghur cemeteries as part of its campaign to target those with Islamic beliefs.

Aziz discussed this during an interview with CNN in January 2020. In response, Chinese state media tracked down his mother and forced her to refute his claims.

“Even my poor mother is not left alone by the Chinese Communist Party’s propaganda”, Aziz added. “They flew 2000km to my home in East Turkestan and interviewed my mother and broadcast it everywhere, saying that I’m lying.”

Aziz also says that the Uyghur population has been trying to sound the alarm regarding Xi’s oppressive regime for years. He is glad that the rest of the country is now standing up to the government, but he fears this may have come too late.

He continued: “We are happy that Chinese people are standing up to the authoritarian regime, but it’s very, very late. We have been saying since 2017 that all Chinese people need to stand up for their rights, and now they are realising how dangerous Xi Jinping is.”

This could signal that the Chinese government is backing down, but the Communist Party has shown a tendency to reintroduce draconian rules at the first sign of Covid spreading.

During the various protests this week, angry crowds have been heard calling for President Xi to resign. Criticising the Communist Party and its leader in China is usually a no-go, with dissent being punished by law enforcement.

Many experts believe Xi’s grip on power is still too strong for his position to be threatened, but Aziz thinks the Chinese President’s days in the top job are numbered.

He said: “I don’t think Xi Jinping will last any longer, he has to step down and resign, that’s what the protestors are saying. This is about China’s danger to the world.”