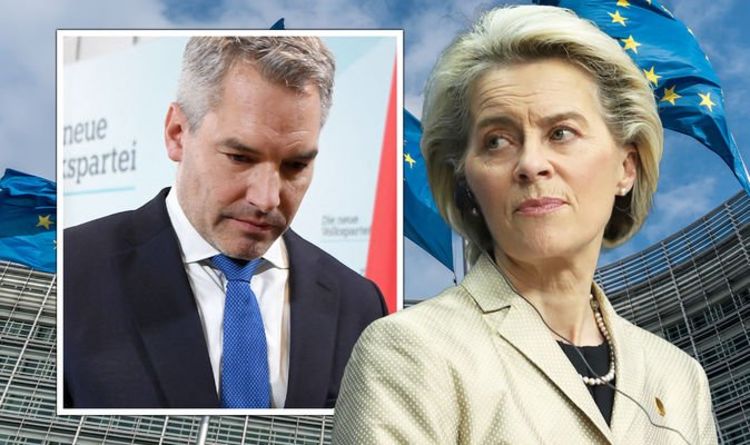 Lord Moylan says EU will be 'laughing' at us over trade

Since 2019 two government regimes in Austria have collapsed due to scandals. The most recent led to Karl Nehammer being appointed Austrian Chancellor, last December, who in less than two months in charge has found himself shrouded in controversy for questions over his official absence from a state event. The crisis is sparking concern for many in the EU as democracy looks at risk. So, what exactly is going on in the Alpine state?

Last October the then-chancellor Sebastian Kurz resigned from his position due to mounting pressure, triggered by a corruption scandal.

Mr Kurz and nine others were placed under investigation after raids at a number of locations linked to his conservative People’s Party (ÖVP).

Prosecutors claimed he was using government money to ensure positive coverage in a tabloid newspaper – something which he strenuously denies.

The development eventually led to the incumbent Chancellor being appointed, in December, after the position became available.

Having served as Interior Minister under the previous government Mr Nehammer first sparked controversy through his choice as to who would replace him.

In the end he selected Gerhard Karner – a small-town mayor from the state of Lower Austria – who during a regional election campaign in 2008 was condemned for using antisemitic rhetoric.

Mr Karner is also an avowed admirer of Engelbert Dollfuß, the former Austrian chancellor who in 1933 dissolved the country’s parliament and assumed dictatorial powers.

Over the festive period, Mr Nehammer drew interest after he excused himself from the New Year’s Concert of the Vienna Philharmonic.

Traditionally, the event is viewed as a cultural high point of the Austrian calendar and is attended by the country’s political elite.

At the time Mr Nehammer explained his absence by citing concerns over Covid, adding that the “pandemic requires sacrifices from us all, myself included.”

As it was, the 49-year-old announced last Friday that he had contracted the virus after one of his bodyguards had themselves become infected.

However, the following day a photo emerged showing Mr Nehammer sitting in a packed ski lodge over the New Year.

Consequently, the photo raised fresh questions both about how he got Covid and his explanation for not attending the concert.

The Chancellor’s spokesman insists he contracted the virus from a member of his security detail, but has provided no scientific evidence to support that claim.

Furthermore, Mr Nehammer angered sections of the Austrian public over the New Year when he claimed that his party “doesn’t have a corruption problem” despite the events which led to him assuming office.

Altogether, the recent developments have led to some suggestions that a snap-election should be held to appoint another new Government.

Will there be a new election?

A recent poll conducted by Statista demonstrated that 41 percent of Austrians would advocate a new election, while 47 percent said the Government should remain in place.

Were a new election to happen, the ÖVP could struggle to remain in power.

The latest polls from Politico show that the party is currently the second preferred choice for voters with a score around 25 percent.

Austria’s Social Democrats are polling as the favourites at the time of writing, with 26 percent of the public.