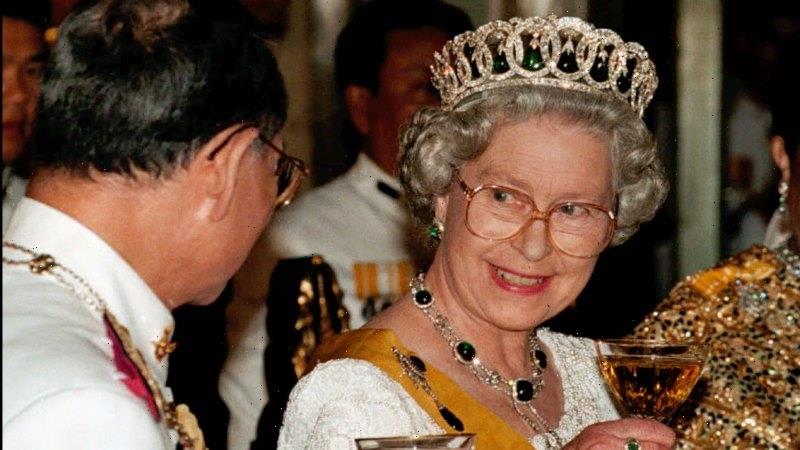 Queen Elizabeth’s personal jewellery collection is a treasure trove of gifts, historic pieces acquired from exiled relatives and family heirlooms, to be distributed at her discretion following her death.

While the Crown Jewels remain the property of the monarchy, with the Imperial State Crown, Sceptre and 530.2 carat Cullinan diamond passing to Charles, more than 300 pieces of personal jewellery are expected to be distributed among her children, Kate, the Duchess of Cambridge and Sophie, the Countess of Sussex.

The collection of 16 tiaras, 98 brooches, 46 necklaces and 37 bracelets boasts some of the world’s most impressive stones, but it is a relatively restrained ring that has become most associated with Queen Elizabeth II. 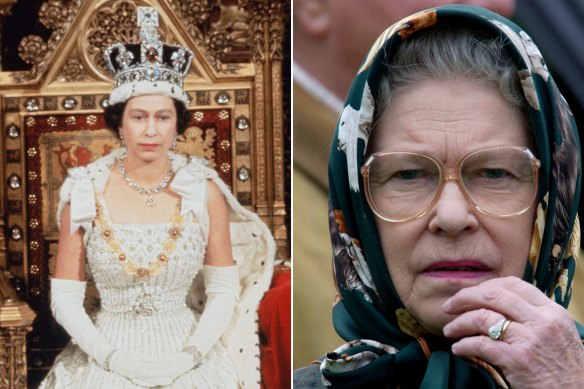 Queen Elizabeth II attends State Opening Parliament in 1967 wearing her full regalia. On the right, with her most constant piece of jewellery in 2002.Credit:Getty

When the engagement of Prince Philip and the then Princess Elizabeth was announced on July 9, 1947, the future monarch wore a 3-carat round diamond ring made up of a centre stone surrounded by 10 smaller pave diamonds. It was her constant, glittering companion and style anchor through the swinging sixties, excessive ’80s and minimalist noughties.

The future consort designed the ring, made by Philip Antrobus of London, using stones from the tiara his mother Princess Alice of Greece had worn at her wedding.

Three strands of pearls, presented to the Queen by her father King George on her wedding day, are another sentimental stalwart at official functions. To prolong their longevity, she commissioned a similar necklace and was rumoured to rotate the pair, along with a triple-strand gift from the Emir of Qatar in 1956. 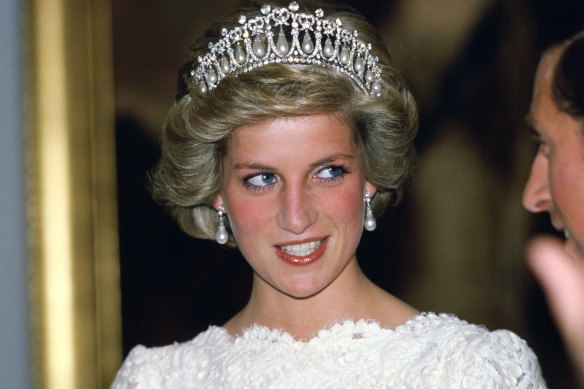 Diana, Princess of Wales wearing the Lover’s Knot tiara on a 1985 visit to Washington.Credit:Getty

Ordered by Queen Mary to resemble a tiara belonging to her grandmother, Princess Augusta of Hesse, also known as the Duchess of Cambridge, the Lover’s Knot tiara was made by Garrard in 1913.

When Queen Mary died in 1953, it was inherited by Queen Elizabeth II and worn by her in the ’50s. The tiara achieved global recognition when it was loaned to Princess Diana, who complained about its weight and the swinging pear-shaped pearls.

In recent years, the tiara has been loaned to Kate, Duchess of Cambridge, soon-to-be Princess of Wales. No complaints. 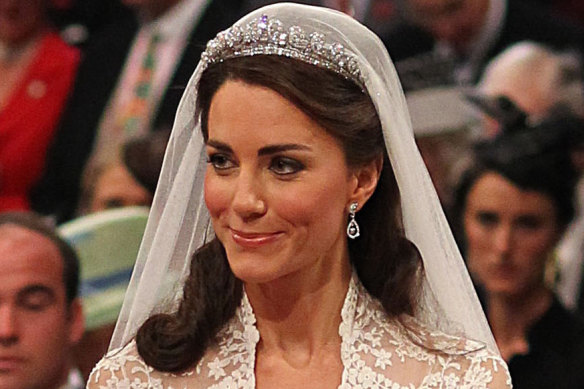 Kate Middleton wearing the Cartier Halo Tiara at her wedding to Prince WilliamCredit:AP

Another tiara given new life by the Duchess of Cambridge is the Cartier Halo Tiara worn on her wedding day in April 2011. It was commissioned by George VI for his bride, the future Queen Mother. On becoming Queen consort, Queen Elizabeth ditched the elegant tiara with 739 brilliant cut diamonds and 149 baguette diamonds, diving into the royal vaults for bigger pieces, giving her wedding gift to her daughter Princess Elizabeth in 1944.

Queen Elizabeth II was never seen wearing the tiara, lending it to her sister Princess Margaret and daughter Princess Anne, before loaning it to Kate. 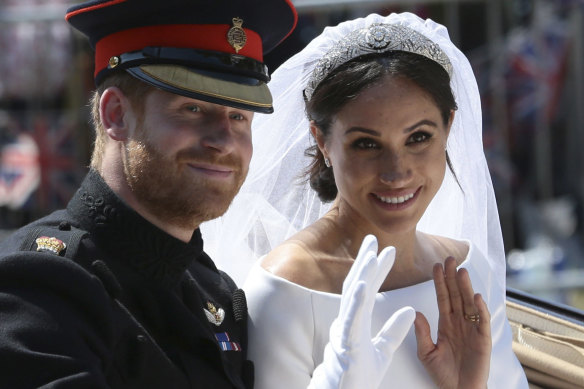 “When it came to the tiara on the day, I was very fortunate to be able to choose this gorgeous art deco-style bandeau tiara,” Meghan, Duchess of Sussex, said in the recording for an exhibition following her wedding to Prince Harry in May 2018. “Harry and I had gone to Buckingham Palace to meet with her majesty the Queen to select one of the options that were there, which was an incredibly surreal day as you can imagine.”

The art deco bandeau style with 11 segments was created by Queen Mary in 1932 to accommodate a detachable brooch given to her in 1893 by the County of Lincoln. When Queen Mary died, it was passed on to Queen Elizabeth II, who was never seen wearing it. The tiara had faded from prominence before Meghan’s high-profile outing, failing to make it onto any of the tiara prediction lists for the wedding day. 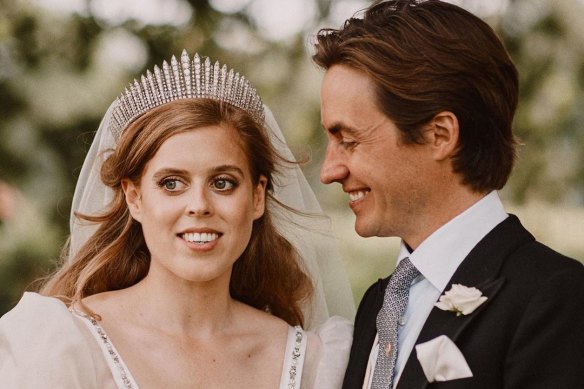 The tiara was commissioned by Queen Mary in 1919 using diamonds that were part of a necklace given to her by Queen Victoria as a wedding gift in 1893. It was then given by Queen Mary to her daughter-in-law, the Queen Mother.

The tiara was part of the Queen Mother’s collection until 2002, when it was left to Queen Elizabeth. 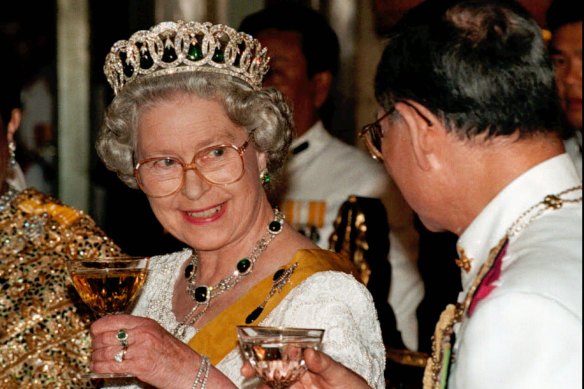 Queen Elizabeth II wearing the Vladimir Tiara with the Cambridge Emeralds and the King of Thailand at the state banquet in the Chakri Palace throne hall in Bangkok, Thailand, October 28, 1996. Credit:AP

The Grand Duchess Maria Pavlovna, married to Grand Duke Vladimir of Russia, the uncle of Tsar Nicholas II, had an eye and considerable budget for jewellery. The last of the Romanovs to escape Russia, she managed to smuggle 224 of her jewels from the country with the aid of her antiques dealer Albert Stopford.

Following her death in 1920, the Grand Duchess’s family sold the jewels. Eventual owners included Woolworths’ heiress Barbara Hutton, Elizabeth Taylor and Queen Mary. Queen Mary purchased the damaged Vladimir Tiara, repairing it so that it could accommodate the Cambridge Emeralds.

The tiara became the property of Queen Elizabeth who had the gold frame replaced with platinum and has worn it frequently to official events. 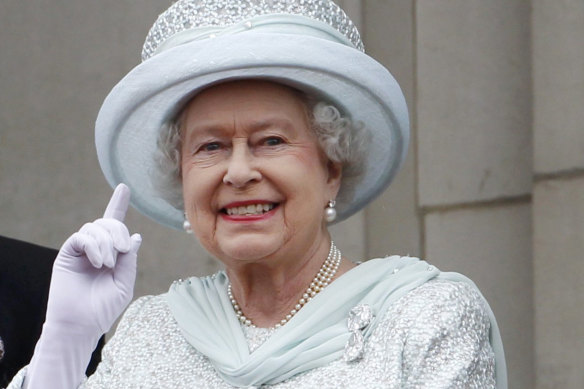 Queen Elizabeth wore the Cullinan brooch on the balcony for the Diamond Jubilee in 2012.Credit:Reuters Pool

Brooches may make less of an impact than tiaras but the Cullinan III & IV brooch consists of two spectacular diamonds valued at more than £50 million ($93 million). The piece is nicknamed Granny’s Chips, a nickname given to the piece by Queen Elizabeth II when it belonged to her grandmother Queen Mary.

Cullinan III is a pear-shaped drop of 94.4 carats and Cullinan IV is a cushion-shaped stone of 63.6 carats, both carved from the original Cullinan stone. Discovered in South Africa in 1905, the Cullinan was the largest gem-quality rough diamond ever mined. The gem was given to King Edward VII in 1907.

Cullinan I is mounted in the Sovereign’s Sceptre with Cross and Cullinan II is now part of the Imperial State Crown.

The brooch was reserved by Queen Elizabeth II for significant occasions, such as her Diamond Jubilee in 2012.

Along with rescued Romanov jewels and Queen Mary’s hand-me-downs, many of the Queen’s most recognisable pieces come from the collection of Margaret Greville. The illegitimate daughter of a brewery millionaire and his married cook, Greville wed the heir to a baronetcy and acquired a considerable jewellery collection through the patronage of Boucheron and Cartier. 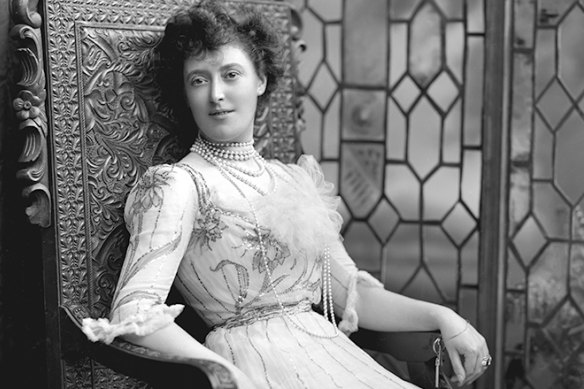 A close friend of Queen Mary, Greville left the bulk of her jewellery to the Queen Mother when she died in 1942. According to the UK National Trust, the jewellery was delivered in an unremarkable black tin box with the full extent of its contents undocumented. 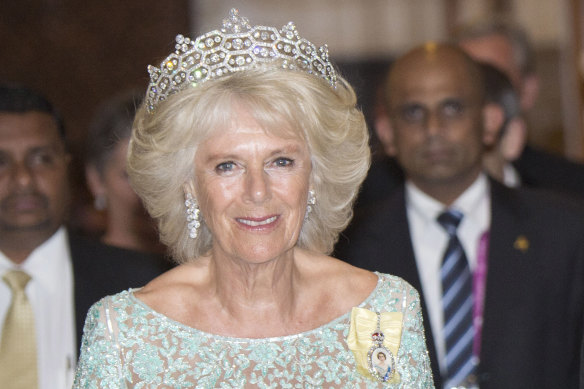 Camilla, Duchess of Cornwall wearing the Grevillle tiara on a visit to Sri Lanka.Credit:Getty

The honeycomb tiara was commissioned by Greville from Boucheron in 1921 and altered by Cartier for the diminutive Queen Mother in 1953 for greater height. The tiara was loaned by Queen Elizabeth to Camilla, the Duchess of Cornwall who has worn it on several official engagements. 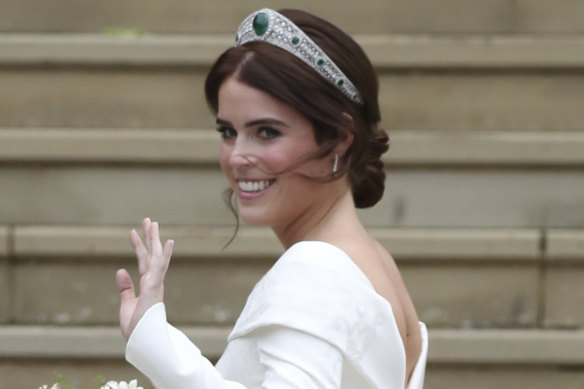 Left to the Queen Mother in 1942, the 93.7 carat Emerald Kokoshnik Tiara resurfaced after decades at the back of a vault, worn by Princess Eugenie at her 2018 wedding to Jack Brooksbank. Created by Boucheron in 1919 in the “kokoshnik” style favoured by the deposed Russian Imperial Court, the tiara was loaned to Princess Eugenie by Queen Elizabeth.

The tiara was embroiled in controversy when one biographer suggested it was Meghan Markle’s first choice for her wedding to Prince Harry.

14/09/2022 World News Comments Off on Who will inherit the Queen’s legendary jewellery collection?
Markets